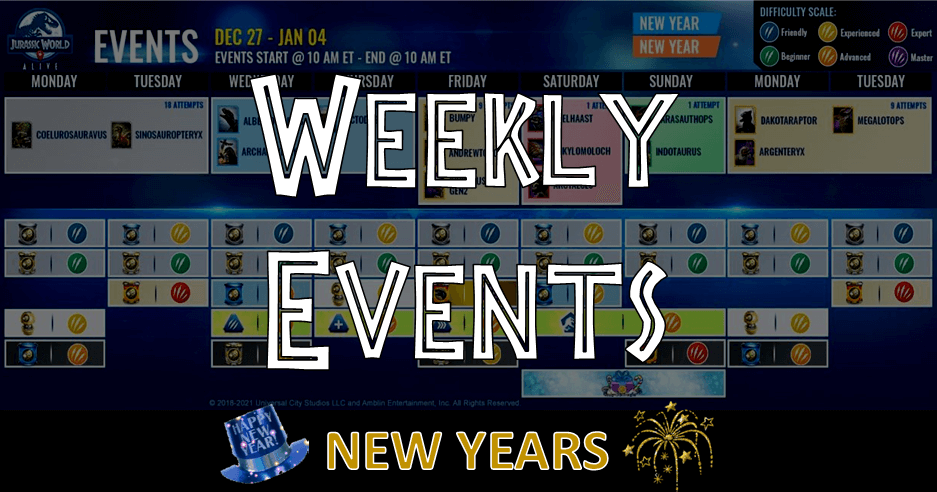 Explorers! We were given the early information last week, and now we officially celebrate the end of 2021 with an INCREDIBLE 9 days of darting ahead. The reason for the additional couple of days is to account for the gap in order to transition their weekly events calendar to run from Wednesday to Wednesday. ICYMI, here is the announcement about that change. And on top of THAT, we still have the Event Exclusive Arctodus in the wild! Let's get to it and talk about our recommendations of what to dart before we break down the rest this week has to offer!

We only have two commons to choose from, and we lean toward Sinos as your better option. It has been around less time than Coel, and Local 3 only comes around every 4 months. Parks are there around 24/7. We do understand you may not have easy access to parks, so it can make sense that you might choose Coel in that case. Either way, they are both great options with great hybrids.

This is pretty tough with two event exclusives, but we will lean toward the newer Arctodus in this case. Despite being released to the wild for a month, the spawn rate has been nothing short of disappointing. Albert isn’t a bad choice, but there is no hybrid to speak of at this time. We don’t have any good reason you would select Archae over either of these options

Our first day of Epics isn’t the easiest of choices, but we surely suggest you target Bumpy. The new hybrid is pretty great and still has potential for a future super. It is nice to save coins and DNA by darting hybrids, but the components of both are available in the wild. And we just finished SR2 hybrid pursuit, so you should be sitting on plenty of its ingredients.

Oh our goodness, this is another day of a difficult decision. As previously mentioned, Ankylomoloch is a great hybrid and comprised of an event exclusive component. Coelhaast is a tiny flying force and also is comprised of an event exclusive creature. Both could also receive super hybrids one day. On the flip side, we have the Arctalces which does have a super and is comprised of two exclusive components. While Arctodus will be wild for 3 more weeks, we still think Arctalces is the one you want to choose. Two event exclusives is twice as challenging as one. No matter which you choose, just be sure to get out and get your one attempt. These Legendary opportunities don’t come around often!

Both of these Uniques are awesome, so it’s too bad we only get one attempt. We give an edge to Indotaurus solely because we get the chance to raid Pthops once a week. As with the Legendaries, though, you can’t go wrong with whichever you choose. Just make sure to get out there and dart one!

We conclude the week with a pool of fairly equal opportunity. We like the idea of darting hybrids to save the coins and DNA required to fuse them. Megalotops and Argenteryx are pretty fierce on their own, but we do get to raid Megatops once a week. Lastly, there is the Dakotaraptor which now feeds two hybrids. We don’t feel you can go wrong in any of these and may even be suited to spread your attempts over two or even all of them.

Strike Events and Trials are also New Years themed and can reward the same Common, Rare, and Epic DNA found under event drops as well as all other Commons, Rares, and Epics introduced in 2021.

There will only be one dinosaur specific strike this week, an Acrocanthosaurus tower on Friday! We've also got the regularly scheduled Boost Strikes on Wednesday (Attack), Thursday (HP), and Friday (Speed) as well as a Badge strike on Saturday.

We do not have a regular scent strike this week, Both Mondays & Thursday will feature New Years Scent which can draw the same Common, Rare, and Epic creatures found under event drops.

On Saturday & Sunday, we have Winter treasure chases. These chests can be opened once per day and will reward coins and boosts.

This week begins the Scorpius Rex pursuit with another week of Carnotaurus! Fire up those gigas, you'll want as much of this Friday spawn as you can get.

This will be our final week with Daily reward of Allosaurus Gen 2 and the arena season reward, the newly introduced event exclusive Cervalces! Note the season will end on Monday despite the event calendar running through Wednesday. 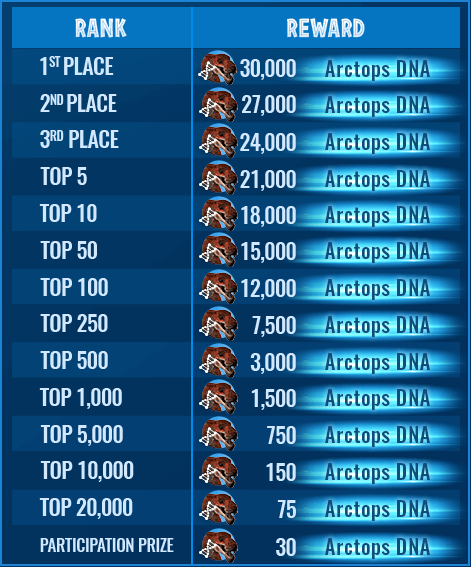 We bid adieu to 2021 with a week celebrating creatures introduced over the past year as well as Arctodus roaming wild and another week with Carno as our hybrid pursuit. Come join our Discord and let us know what you plan to dart! We look forward to your input and hope to see you on there!