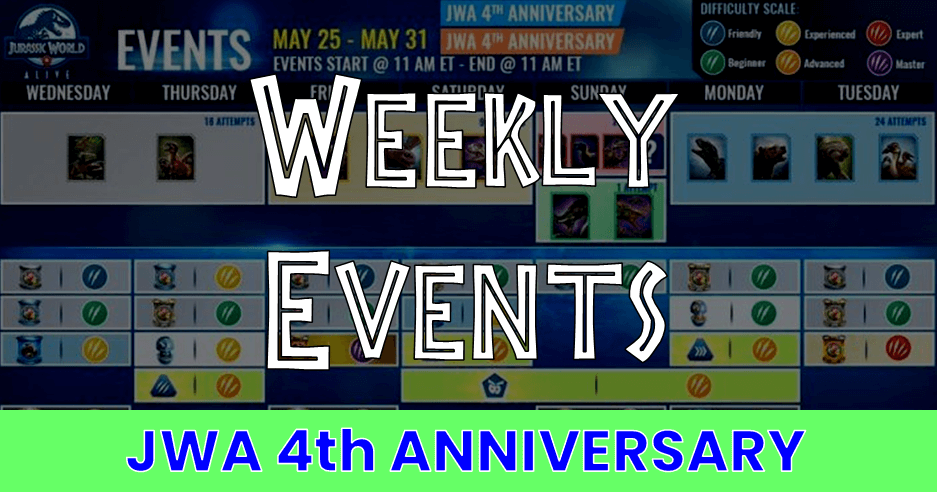 Explorers! We can hardly believe we're now FOUR YEARS in to JWA and feel excited to celebrate all the amazing creatures that have been introduced over the past year! A bonus day of treasure chases, the introduction of a surprise "fan favorite", and Update 2.16 also await. Let's get to it and talk about our recommendations of what to dart before we break down the rest this week has to offer! 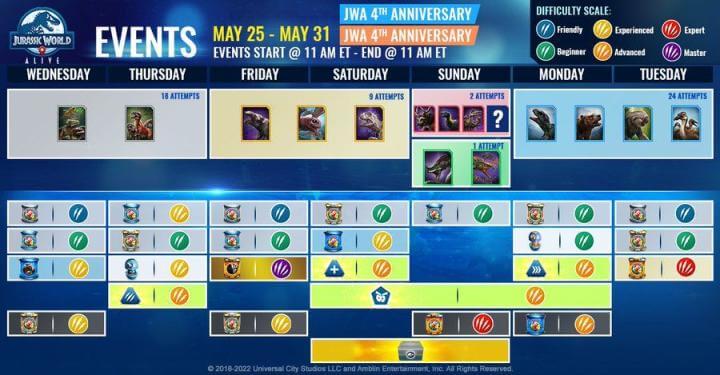 This past year introduced Tiny Flyers to the game, and Coel was among the first. If you don't have easy access to parks, you'll want to make this your preference. However, Sinosaur is also fine, and you may find it in your best interest of time and energy to split your attempts.

The large majority of those who have participated in our Voting Poll as of writing will be darting whatever crosses their paths.

Anurog is your target here if your priority lies with your arena team, SR2 would be the second best. Both have hybrids with arena relevance, though you can fuse your own SR2 with creatures found in the wild.

As base epics, Anurog is very much your strongest of these 3 for qualifying tournaments (which we have one this weekend). Neither other option is very prevalent in tournament, and you can look back to the Arena advice for thoughts on the Unique hybrids.

Andrewtherium is really the only one here used in raid strategy, and the only we've seen it used in is Brachi. We wouldn't recommend making your choice based on raids for this pool of Epic choices.

It's always a massive challenge when we're faced with multiple Event Exclusive options, but two of these are only considered so because they themselves are hybrids. Both Andrewtherium & SR2 can be fused with components found in the wild, so we highly suggest you use your attempts on Anurog.

The extreme majority of those who voted in our Voting Poll will be looking to Anurog. There are very little votes on any other options.

5/26 Update - the "surprise" is confirmed Rexy, this information is visible in your in game events calendar.

We're going to stick with only an "overall" breakdown here because of the "surprise" element that is our 4th option. Every sign points to this being Rexy, and we don't know what the future holds for her (assuming that our guess is accurate). We think it best to use both of your attempts on Rexy due to the unknown, though perhaps more will be known with Patch Notes on Friday. If it turns out not to be Rexy, then we look at the others as follows.

All 3 options here have use and relevance in the arena and tournaments but not really raids. If you don't live in the Struthomimus region (Continental Europe), then Fukui seems your ideal choice with your lack of access to one of its components. Tarbognathus is the latest Legendary to break in to the high arena scene, but you can find it components in the wild no matter what part of the world you are in (Tarbo is global, Compy2 is found in Local 4). Next there's the Bear that helps make the Bear King, one of two fusible Apexes. This was once made of two Event Exclusive components, but Ludia has released the little Bear in to the wild. There truly isn't a bad option here, just be sure to get out and do both of your attempts!

It's hardly a surprise that the "surprise" option for Sunday is leading the way in our Voting Poll since it feels very obvious it will be Rexy.

We like Ardontog over Troodoboa mainly based on accessibility of components. Everything needed to build Troodoboa can be found in the wild, but Ardontog requires an Event Exclusive piece in Anurognathus. We also find the tiny flyer to perform better overall than Troodoboa.

Most who voted in our Voting Poll will be using their attempt on Ardontognathus.

When considering your Arena team, it's easy to rule out Megalonyx as neither it or its hybrid has significance in the higher arenas. How to choose among the others? We are able to look past Arctodus since it was released to the wild. By the time Monday comes around, the Albertospinos ACs will be over, and hopefully you had a nice haul of Alberto from both the weekend's tournament and the AC rewards. Even so, Albertocevia is such a great force, there's plenty of reason to still make this your top choice. We also really like Rodrigues, it's the newest of them all and feeds a fantastic fighter in Allorodrigues. We have a lot of attempts over just two days, so ultimately your best bet may be to split your attempts over both Event Exclusive options.

As base rares, any but Arctodus perform well in qualified tournaments. Onyx is also responsible for a great Epic. We have yet to see "Ace" or Allorod in a Unique skills tournament but imagine both are pretty great.

None of these or their hybirds have presence in common raid strategies.

You're really going to want to devote your time and attention to the Event Exclusives over the other two. The other two can be found in the wild AND we have the opportunity to raid one (Onyx) each week. Go with your gut and personal goals when deciding between Albert and Rodrigues, or take our advice from the Arena section and split your attempts over both of them.

Albert leads the way in our Voting Poll with over half the participants (so far) picking this one. Rodrigues is a distant second with very few looking to Arctodus or Megalonyx.

Strike Events & Trials will also be JWA 4th Anniversary themed and will reward the same Common, Rare, and Epic DNA found at Event Drops as well as all other creatures introduced over the past year (pop the "i" button for a full list). There is a very tiny chance you may be lucky and also receive Legendary in your haul!

We again have two dinosaur specific strikes this week, a Preondactylus strike on Wednesday, and an Ailurarctos strike on Friday. We've also got the Boost Strikes on Thursday (Attack), Saturday (HP), and Monday (Speed) with a multi day Emote strike Saturday to Sunday.

We have a 4th Anniversary scent strike on Monday. This scent can draw any Common, Rare, or Epic creature introduced in the past year. Prior to that will be a Rexy scent on Thursday. This scent GUARANTEES a Rexy spawn and then can attract any of the following when activated:

We have a treasure chase spanning two days this week, Saturday and Sunday. When they stray from the norm, there's a solid chance of other goodies in the chests. Be sure to press the "i" before collecting in case there are FIPs and you need to create room!

This week concludes the Indotaurus pursuit with the Carnotaurus!

This will be our final week with Ailurarctos as our Seasonal Arena Reward and Bumpy as our Daily Dino.

The fourth and final week of the Albertospinos AC will be a Rare and Epic (All) Balanced Team Rules Advantage tournament for Event Exclusive, ALBERTOSAURUS DNA! 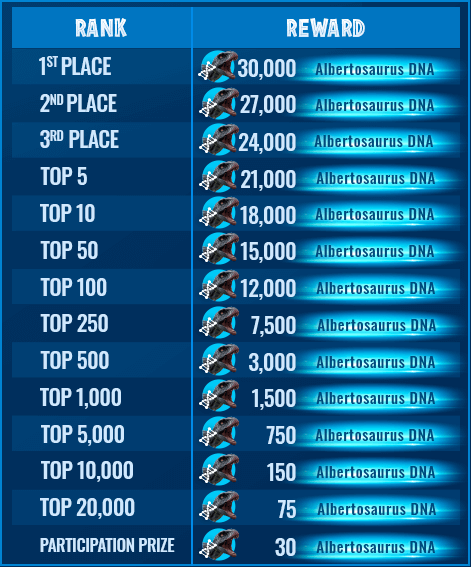 Continued by popular demand, the Mortem Rex Raid will be sticking around on Sundays from May 4th 11:00 AM ET to June 1st 11:00 AM ET. This allows more time for us to level up the Death King!

A super happy 4th anniversary to JWA and a million thank yous to Ludia and the community for making it all feel so great. The early information called this "part 1" of the celebration, and we can't wait to see what surprises are ahead. Still unsure what you want to dart? Come join our Discord server and talk through where you are and what your goals are with our thousands of members. And if you've made your decisions, let us know what you plan to dart and why!