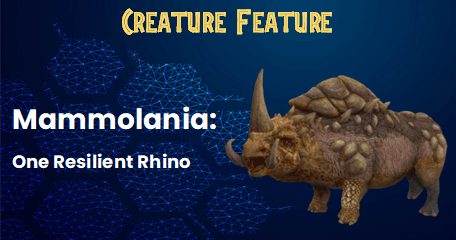 Back before 2.0, there were 3 creatures that absolutely dominated the meta at the time. You had the matchup king Geminititan, who rarely lost and always had a chance to kill something no matter what it was in a raw 1v1 matchup. Next you had who I feel was the best creature at the time: Entelomoth. With easily the best strike at the time in persistent ferocious strike, mutual fury with a good speed tier, high damage, a rampage, and on escape heal, Entelomoth was almost unstoppable. And then finally, you had the setup king: Mammolania. When set up with persistent ferocious strike, it could easily take out everything in the game, with some creatures like Trykosaurus not even getting a hit off against a Mammolania. However, 2.0 came and put a stop to this. Entelomoth was gutted and Geminititan still slowed and used definite moves. However, while those two were nerfed, their role stayed the same for the most part. Mammolania however switched from offense to defense gaining 20% MORE armor while also getting a moveset that cannot deal with armor anymore. So, is Mammolania able to live up to its pre-1.14 self? 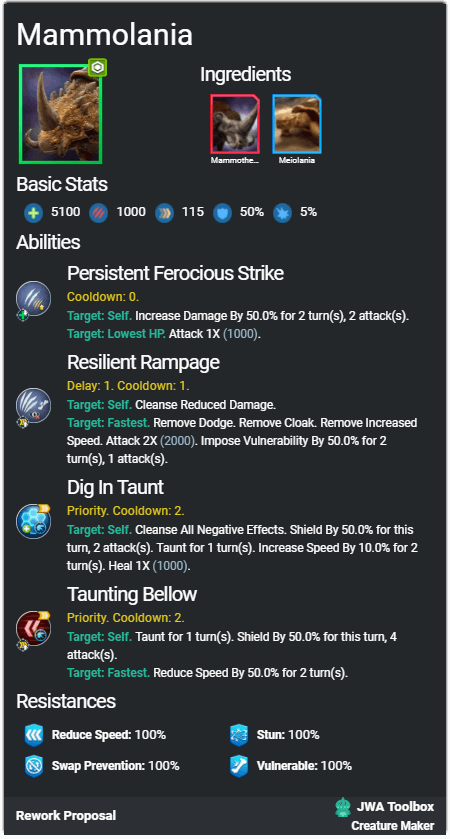 The answer to that question is no. 1.14 Mammolania is probably stronger than any creature in the game as of now. BUT, Mammolania is still a very good unique. Is it at the top of the ladder? No. But Mammolania is still a very beastly creature. However, it is the bulkiest creature in the game, with 50% armor AND over 5000 hp. The amount of creatures that can take it down without being able to bypass that armor in some way is so small you can count them on one hand with fingers to spare. And on top of that, many creatures that CAN bust armor like Thoradolosaur and Mortem Rex STILL lose (unboosted). This is all thanks to persistent ferocious strike, turning that 1000 damage to 1500. And with resilient rampage, Mammolania can lay on the hurt. Now Mammolania has received 2 changes: a health buff near the start of 2.0 and the resilient change. While many creatures got hurt, Mammolania benefitted more from this change than something like its parent Mammotherium. With so many creatures in its respective meta being immune to deceleration like Compsocaulus and Scorpius Rex gen 3 or with others being slower and unable to speed up past Mammolania like Skoonasaurus and Geminititan, this vulnerability change allowed Mammolania to dish out a lot while taking a beating in the process. And for the things like Erlikospyx that CAN be slowed down, well Mammolania has the armor to just brush off those attacks. A creature can have a really good moveset and stats, but bad resistances that hold it back, like Entelolania. While it has beastly stats and a great moveset, it lacks a lot of key resistances to be a really strong creature. Mammolania is different. It has 4 incredible immunities to back up the great moveset. It has stun immunity, which the best in the game. It has pin immunity to get out of the clutches of something like Grypolyth, vulnerability immunity to better tank Hadros Lux and Skoonasaurus, and deceleration immunity to always keep ahead of the 3 sauropods. And with ferocity and dig in, Mammolania just became much harder to kill. However, there are creatures that Mammolania will struggle with include creatures with enough damage to tank its power and bust through that armor like Entelolania. Trykosaurus can use its armor and get revenge on Mammolania now. Monolorhino can swap in on Mammolania turn 1 and come out on top thanks to its shields, extra speed, and definite impact. Spinoconstrictor may not pierce armor, but it can bypass that armor with bleed. Despite the weaknesses, the strengths still make this creature a force to fear.

What is Mammolania's biggest strength? Especially in boosted environments.

Like in an unboosted environment, it’s the bulk and the immunities that make Mammolania a strong creature. These help boost the moveset’s strength even more, because the biggest weakness of persistent ferocious strike is stunning moves. And with attack boosts, that ferocity can make lay even more hurt on you or regenerate more hp.

What is Mammolaia's biggest weaknesses? Biggest downside to it?

While Mammolania is a great wall, there are many creatures that can take it on. Freddo brings up the obvious ones like Mortem and Grypolyth, but thankfully it can run from Grypolyth. But there are many creatures that Mammolania cannot really run from safely, like Indotaurus. Other top meta threats like Antarctovenator can take advantage of that slower startup to set up ferocity for a big definite rampage. Freddo also discussed how it can only cleanse bleed every 3 turns, so a Scorpius Rex gen 3 or a Spinoconstrictor can take advantage of that cooldown. Finally, he brings up something that is more player-oriented about Mammolania. Mammolania is quite predictable. You can tell when the opponent is going to try and heal, when they’ll rampage, and when they’ll strike. Mammolania is a Dr. Suess book. Anyone can read it.

Why use mammolania over another wall like testacornibus or skoonasaurus? What scenarios does it excel more in than those 2?

When you look at the top players, there are tanks. But the tanks you see are Skoonasaurus or Testacornibus. Why? Because these 2 are just better at being tanks. But I asked Freddo about the perks of using Mammolania over these 2. He straight up said Mammolania is worse than those 2, but it has its advantages. Like for example, Skoonasaurus is unable to heal or cleanse bleed. And on top of that, it’s pretty slow, so creatures in important speed tiers like Hadros Lux will always be faster. But Mammolania is faster. And with Testacornibus (as well as Skoonasaurus), Mammolania can always from something like Grypolyth while they both can get pinned. Also, Testacornibus can get stunned, which is a huge disadvantage for anything. But Mammolania will never get stunned. And compared to Testacornibus, Mammolania’s burst damage is far better. Testacornibus takes a bit of time to get going, but Mammolania can always get going in 2 turns. And finally, Freddo brought up how bellow can be used as a last ditch effort to mess up an opponent before going down. While Mammolania has these perks, it is still weaker than the other 2.

The last patch brought some very big meta changes. Hadros Lux no longer has stupid amounts of output, Mortem Rex can resist vulnerability again, Ceramagnus got a big damage nerf, and Indotaurus and Phorurex (and a disappointment called Andrewtops) entered the fray. 2 of the 3 uniques were meta-defining. So I asked Freddo how this meta shift affected Mammolania. He said while it CAN kill both Phorurex and Indotaurus (based on certain boost spreads and predictions). Thankfully Phorurex cannot pin Mammolania, but Mammolania does NOT want to run from either, especially from Indotaurus. As for the apex nerfs, this also hurt Mammolania. I call Mammolania the “Apex Slayer” as it can take down all apexes unboosted and can take down all but Mortem when boosted (besides MAYBE Hydraboa). And the 2 resilient were the strongest apexes around while Gorgotrebax was on the rise. Because Mammolania could take on almost any apex, it had a good niche. But with the 2 best apex creatures it countered nerfed, Mammolania also got hurt a bit as well. This last patch was not kind to Mammolania.

What future for Mammolania do you see? Do you see yourself dropping it?

After the indirect nerf to Mammolania, I asked Freddo if he’ll still keep Mammolania on the team. He says Mammolania’s future is uncertain. However, Freddo does enjoy using it. But sadly, Freddo states that if we ever get a boost reset or shuffle, Mammolania will probably be dropped from his team because Testacornibus is just a better option. There is little point in using Mammolania when Skoonasaurus and Testacornibus do the job better. But Mammolania will always do well in this tanky meta.

When it comes to Mammolania in battle, it’s best to try and get a setup to really come out at the opponent swinging with that boosted rampage. And the next turn will have a vulnerable creature with a ferocious strike coming their way. Mammolania is also good at taking on a bulky creature that cannot heal or pierce armor like Skoonasaurus or Geminititan who can pierce armor every 3 turns. Mammolania can also be a decent lead, being able to never go down without a good fight or being able to just swap out whenever. Finally, Mammolania can also be a rudimentary swapper when you have nothing left. Especially if it’s a creature like Erlidominus, Mammolania can just swap in and absorb anything Erlidominus, Skoonasaurus, or Gorgotrebax and absorb anything they throw at it while also being able to just heal back up and dish out some major pain.

At the end of the day, Mammolania is a creature that is good, but not very usable because there are so many creatures like Testacornibus that just do the job better. But you should never discount Mammolania as a harmless unique because it can easily punch a hole in a team unprepared to take it on. As long as the meta is somewhat tanky, Mammolania will always have a place in it being the bulkiest creature in the game. I hope you have a great week and a good Titanoboa tournament. This month the next 4 creature features will be on the scariest rare, epic, legendary, and unique, so stay tuned for the scary rare article coming out next week. Happy playing to everyone.