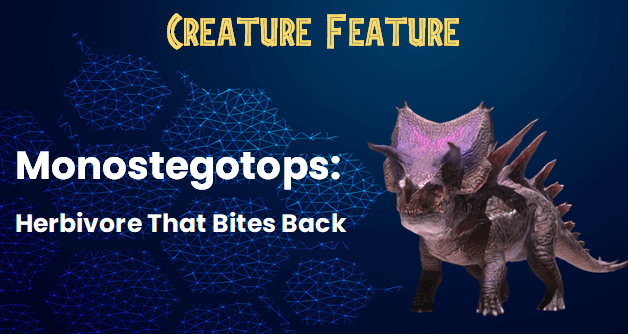 In nature, the scariest animals are usually the carnivores. Snakes, spiders, sharks, and so on are the ones people run in fear of. However, it’s the herbivores you have to watch out for. Attacks by cattle are more frequent than shark attacks, and in Olympic National Park, the first fatality caused by an animal wasn’t a cougar or a wolf or a bear, but a mountain goat. Hippos are the most dangerous wild animal in Africa, and even the goofy-looking ostrich has a dark side. Bull elephants can level small villages and an angry rhinoceros can flip a car with ease. The same is true with creatures from different time periods. Nothing would want to mess with a full grown Triceratops, and there have been Allosaurus fossils found where a Stegosaurus made it known to not mess with them. Nothing is stopping an angry sauropod and Therizinosaurus's claws told hungry mouths to back off. Herbivores are terrifying, and when a carnivore's aggression is thrown in, there's no telling what could happen. There exists a legendary herbivore with carnivore DNA that can bite back. Monostegotops is a creature that can be scary on the field as well as off it. So, is Monostegotops as scary in JWA as it would be in real life? 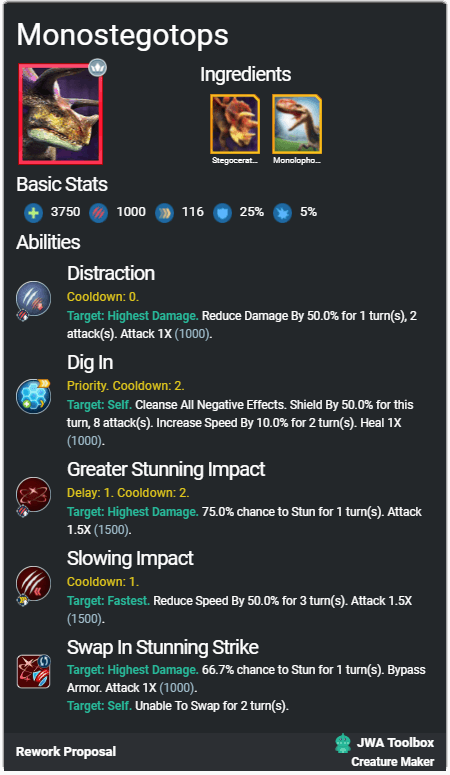 Sadly, the answer is no. Monostegoptops is a decent legendary, but when it comes to legendaries, there are much better swappers to choose from. Megistocurus is a great trapper and swapper, and Dracoceratops has more damage. But despite all that, Monostegotops has a niche as the fastest legendary swapper that also has some good qualities on the field. First up, it is the only true swapper that can regenerate hp in the form of dig in, allowing it to tank a hit better and then allowing it to also swap out that turn, a luxury something like Megistocurus doesn’t have. Monostegotops is also unique as it’s the only creature in the game that has greater stunning impact, which is a powerful move as it allows it to not only hit hard, but also potentially get a free turn in against something like Eremoceros. And when epics are included, Woolly Rhino is a popular pick. Monostegotops can easily put it in its place being a faster swapper and swap in on the same turn, really hurting the rhino. However, at the same time, with epics come Megalotops and Argenteryx, and unfortunately, they hurt Monostegotops and its overall viability due to their movesets and on escape abilities. In a unique meta, again there is not much use for Monostegotops either (or any legendary for that matter). With Testacornibus dominating the meta and Indotaurus and Phorurex not far behind along with Monolorhino doing a better job, Monostegotops is again outclassed in almost every way. So in the end, Monostegotops best shines in a legendary-only format. It outspeeds both Dracoceratops and Megistocurus, can really bully Carnotarkus into a much more manageable scenario, can wrestle with Eremoceros and get it into a more reasonable position, easily pick off a Mammotherium with the swap, and annoy the newly buffed Grylenken with its slowing and stunning abilities.

Boosts change the name of the game and can turn a mediocre creature like Gorgosaurus into an absolute monster. For someone who used this legendary swapper, look no further than yours truly. I myself use Monostegotops with some other unusual creatures, and I’ll give you my thoughts here.

How does Monostegotops do with boosts and what is the best boost spread?

Monostegotops does pretty well with boosts. When you boost it, you have to invest in attack. That way, you can heal more with dig in and also do more damage on the swap. However, Monostegotops is also pretty bulky, so do not neglect health either. As for speed, maybe one or two investments in order to outspeed another Monostegotops in an advantage setting is fine, but nothing more than that. I would say that about 6000 health and 118 speed is good and then just dump everything else into attack. In a boosted environment, it is one of the better picks for sure. While not as good as something like Acrocanthops or Dodocevia, it is better suited to this meta than most other legendaries as it is the only creature with swap-in stunning strike. So while it may not hit as hard as Dracoceratops or Megistocurus, it is easily the safest of the swappers.

What is Monostegotops’s biggest weakness?

Is Monostegotops viable in the arena?

If you want to use Monostegotops in the arena, you’ll need to pair it with good teammates if you want to get far. Odds are Monostegotops isn’t going to get you further than the gyrosphere depot and has no place in the shores. While it is much better in the arena compared to other legendaries like Alloraptor and Indoraptor gen 2, there are still better legendaries to choose from like Coelhaast, Mammotherium, and Indominus Rex. However if you want a legendary swapper, consider Monostegotops. It’s good and easy to level with little competition for ingredients.

How good is Monostegotops in an advantage tournament?

Monostegotops is great for advantage events. Unlike Dracoceratops, Monostegotops can pick off many of the strong creatures that can resist rending effects like Tryostronix and Dodocevia (which usually loses a member when it swaps in). Indoraptor gen 2 is quite common, and Monostegotops can usually switch in on one and rough it up or take it down with its bulk and slowing abilities. And Indoraptor doesn’t want to use mutual fury otherwise you can heal 50% more hp. With popular fierce creatures like Acrocanthops, you can distract those rampages. And other top tiers like Eremoceros, stunning impact can put them in a sticky situation. While it isn’t the best legendary for a legendary advantage event, it’s a pretty strong pick.

While I will probably still use Monostegotops, the future isn’t looking all that good for it. Argenteryx and Megalotops are perfect examples. With more creatures being introduced with on escape abilities, Monostegotops and other swappers like Dracoceratops are struggling in tournaments more and more. Heck, Woolly Rhino wasn’t doing too well last legendary/epic event, and it’s got the big 1500. Even Monolorhino was dropped from some teams in the last unique tournament due to all the on escape abilities present. While Phorurex’s on escape obstruction was only feared by uniques in that format, now Grylenken has access to the ability, and with Sinokotaraptor possibly making an impact with its own cautious on escape, legendary swappers are in for a bit of a rough time. And with competition from Megistocurus, Monostegotops is not looking too hot right now. However, Monostegotops could get some love. Ludia made me eat my words last time with Dimodactylus, so they could easily do it again.

When it comes to using Monostegotops in battle, you want to use it like any other swapper. Wait until you can pick something off and throw it in. Also, being the fastest legendary swapper, if you feel the enemy will swap in something like a Megistocurus or Woolly Rhino, swap it in and stun it, wasting their turn or potentially picking off an already-injured swapper. Unlike Dracoceratops or Megistocurus, you can successfully throw it at a creature at full hp and whittle creatures like Carnotarkus down. Just swap in and use your shields and distraction effects to eat away at it. So while Monostegotops may not be the best option to pick, it has plenty of options available to it for a swapper.

At the end of the day, Monostegotops is just a solid creature. It’s not crazy good or impacts the meta all that much, but it’s not something to dismiss either. It has its strengths and weaknesses. While it's a shame that many of these older legendaries like Pyrritator and Gigaspikasaur usually are pushed away in favor of newer legendaries like Coelhaast, it's good to see some like Monostegotops hang on. Hopefully in the future, it'll become a legendary to really fear. Thank you all for reading and stay tuned for the final scary creature to wrap up the spookiest month of the year. Don't forget to dart your legendaries and epics and get ready for the unique tournament tomorrow.