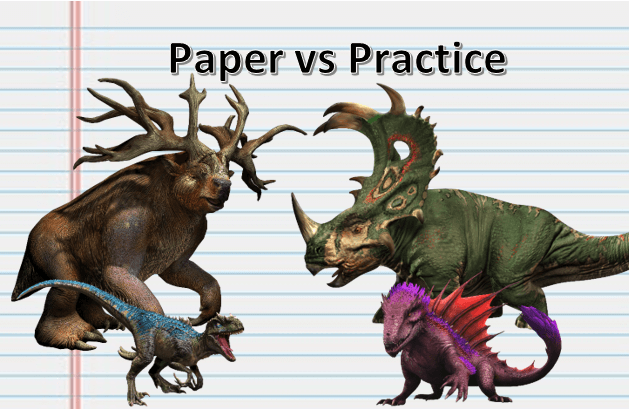 So, what are the “paper creatures”? These are the creatures who look really good on paper, but when you put them in battle, they flop. The best example of this WAS diplodocus before resilience applied vulnerability, but it’s a bit silly to talk about past creatures right now. However, there are still many paper creatures around. Another favorite example of mine is Alloraptor. Let’s look at the traits unboosted to start. 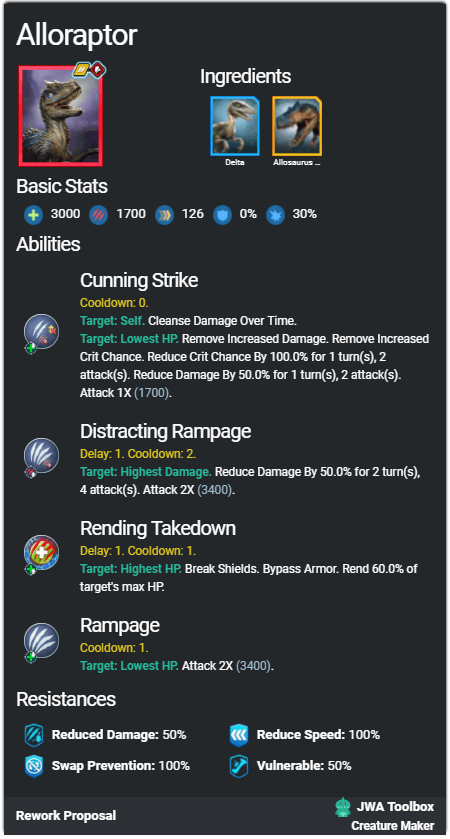 When you look at this, Alloraptor looks really good. It can 1-2 so much, or just 1-shot an enemy. Good speed, great output, and nice resistances. HOWEVER, when you use alloraptor, it just flops. There are many critical areas its lacking. To start, it has 0 stun resistance, which is probably the most important resistance to have. Losing a turn is so detrimental and it’s what kept creatures like entelolania out of tyrant in our last GP list. That’s how important stun resistance is. Next is the HP. In many scenarios, it just gets 1-shot, Mortem, erlikospyx, revenge gorgotrebax, and so on. And what doesn’t kill it just swaps into something to finish it off, as it isn’t very hard to deal at least 1500 in one turn. In fact, many swappers can come in and kill it turn 1 like sinoceratops, woolly rhino, ceramagnus, and so on. And this also comes into play with the moveset. While it CAN 1-2 so many tanks, most top creatures can 1-shot it right off the bat, so it has to use strike to avoid taking too much damage, but then this limits its output. Now you’re between a rock and a hard place. And it only gets worse for alloraptor when you throw boosts into the mix. You now have to try and boost up that terrible hp stat and sacrifice speed that allows creatures like erlikospyx to 1-shot you, or choose between going fast and usually only lasting 1 turn. And with vulnerability being so important nowadays, it just fails to keep up. In a vacuum environment alloraptor is very good, but this isn’t a vacuum arena.

Another example of a paper creature would be something like Magnapyritor. Again, better stats, good moveset, and amazing resistances. So what’s the issue? Well, it doesn’t really excel in anything. Compared to testacornibus and skoonasaurus, who can slowly tank a bunch of damage and dish out massive amounts in return, or ceramagnus and monolorhino who run the swap-meta, or Scorpius rex gen 3 who has a move that nullifies so many creatures like trykosaurus, mortem rex, and diorajasaur. Magna doesn’t really do anything special. It’s either too slow, too frail, or not hard-hitting enough when boosts come into play, and it has nothing to prevent swappers with. So, while magna may be decent unboosted ON PAPER, in practice you’ll be lucky to even see it.

So how do you find a paper creature? Well one way to start is to look for something that excels in nothing. Magna is a prime example. It can cover a lot, but not extremely well. This stretches a creature too thinly and is what leads to a creature never getting used. Another way to identify a paper creature is to find a creature suffering in a particular stat. Alloraptor suffers in HP and even speed. Something like diplodocus, which CAN do big damage on a resilient strike and rampage, will rarely pull it off by lacking stun immunity and having poor turn 1 options as well as poor speed.

The “Off-paper creatures” are the creatures that look mediocre on paper, but when you play around with and use them, these creatures are exceptional. And no better creature fits this than everyone’s favorite epic: Compsognathus. They are well-known. When you look at the base stats, they are a bit underwhelming. They are the same as entelodont minus the speed, and it’s not like anyone cares about entelodont, so what gives? It has lousy hp, mediocre attack, and decent speed. That’s it. Well, it is also a flock, and with this it can prolong its lifespan majorly. It has a rally heal move that also distracts AND revives a member, allowing it to better tank hits and dish out damage. It also has a “no escape” ability, a rally heal swap-in, stun immunity, and pin resistance to swap out. The legendary/epic tournament meta usually revolves around these 3 rats with scales. They have so much going on in the right places that it is one of the best epics and nonhybrids in the game.

Another off-paper creature that I personally love is Eremoceros. When it comes to Jurassic World Alive, the actual team planning requires some skill, as well as leads and using swaps. BUT, using the actual creature really doesn’t. It isn’t hard to press Toxic Quills and Cunning Rampage on Scorpius Rex gen 3. However, out of all the creatures in the game, slothdeer is probably the hardest to use. With a priority move that has no cooldown in Camouflage, Dig in, Shielded Decelerating Strike, and Cunning Rampage, slothdeer has a very unusual kit not really seen in any other creature. It also has decent resistances and great stats to back it up. So why is it so good? Well it has options. But hold up Ed, I thought you said something like this isn’t good with Magnapyritor? Well, yes, it isn’t on MAGNAPYRITOR, but slothdeer is different. Magna has to wait to distract or shatter. Slothdeer can always distract, always dodge, always speed up, always slow, and always shield. It is much faster at adapting than something like magna. You need to quickly dodge? Well you have a priority move that can handle that right now. What about distraction? Well you can camouflage or rampage. Shield? Dig in or shielded decelerating strike. It has the ability to make a complete 180 and deal with whatever at that moment is thrown at it.

Finally, another creature that doesn't look good, but after multiple test runs has shown great success, is Sinoceratops. When you look at the stats, they are mediocre. But when you put sino into practice, it is something to consider. Sino actually got a bit of a bit of a buff in the scope of the meta as well as in its own kit. First up, you can just apply vulnerability and just swap into sino. Nothing new. However, now sinoceratops can apply vulnerability itself, and then use that to unleash a devestating instant charge now boosted by vulnerability. The opposition now has to take the priority impact. It also can do something that its exclusive counterpart woolly rhino cannot do: Dig In. Woolly rhino MUST stick around for 2 turns if it swaps in. Sino can just bounce after turn 1. Also, sino does much better waiting out those 2 turns thanks to instant charge, which is something that can really hurt many swappers like the mighty Ceramagnus. Is sino better than woolly rhino? No. But it can be quite deadly in the hands of a smart player.

So how do you find an “off paper” creature? Well, you really can’t tell right away. That is what friendly battles are for. This is why we at Gamepress make sure to test these creatures when doing the tier list. You can’t just look at something and say it’s good or bad, even if it actually looks really good. You need to play around with everything and do some tests yourself.

So this is something that can help you in the arena and tournaments. It’s always important to do matchups and play around with different creatures and boost spreads. It’s always important to do your research before you make a decision as sometimes you can’t take those decisions back. I thank you for reading this article and hope you have a great day (despite the whole Ludia controversy).