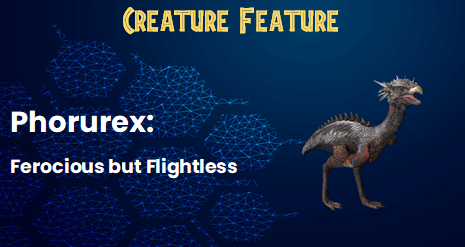 2.10 was released a few weeks ago and if there’s one creature everyone is still talking about, it’s Phorurex. This new hybrid has people scrambling to find as much Dracorex gen 2 as they can because, spoiler alert, this bird is crazy strong. With the exception of one stat and a few resistances, Phorurex is strictly better than Phorasaurua in every way. But, is it at the top of the meta?

Who am I kidding, of course this thing is at the top of the meta. So today I will go in detail as to WHY Phorurex is at the top right now.

Let’s start off unboosted. Luckily there was a tournament not too long ago that allowed everyone to use the brand new hybrids, and guess who was a must-have from day one? Phorurex is not only fast, but decently tanky with over 4000 hp and has great burst damage with two rampages and 1600 damage. And like Phorasaura, one rampage is instant while the other is for running. But, the instant rampage now has a cunning effect. And if that isn’t enough for you, the running move not only applies damage over time, but also shatters shields and bypasses armor. Sidestep is old news. Critical sidestep again does what sidestep does, but now you get a guaranteed critical hit next turn. And daring strike just to top off the four basic moves is quite crazy. Right now, this thing is already a very strong creature, but wait there’s more! You have Dracorex gen 2’s swap-in ability that can also pin as well! And not only that, there is a bug involving this move that allows you to pin creatures like Ardentismaxima and Monolorhino despite their immunity to pinning effects. While the swap-in only does half damage when Phorurex is below half hp, just the pin bug alone makes up for it. And to top it off, why not give it an on-escape move that not only pins and strikes, but stuns as well to get rid of the chance of a counter from something like Spinoconstrictor. In the last skill tournament Phorurex dominated. There was very little that could take it down, let alone before it got the chance to run. Thankfully it could be distracted so other top tiers in the event like Antarctovenator could somewhat deal with it. It was also the best creature around to clean up an injured Testacornibus on top of that. It could also abuse sidestep as well, and thanks to its deceleration resistance, it could still outspeed creatures like Skoonasaurus. Critical sidestep can also be used to stall for lethal rampage and run. All these combines make for a creature that must be taken seriously.

Boosts can always shift just how good a creature is. Majungaboa is a creature that without boosts does mediocre in the meta but become much more viable when given boosts. So what about Phorurex? Phorurex loves a boosted arena. I am not knowledgeable about a boosted Phorurex, so I asked a few people about it, so special thanks to IDGT from Apex Predators and Cwheels and Kelociraptor from Kelliance.

With any creature, a proper boost spread is needed. You can’t just throw 20 speed onto Titanoboa and think it’ll perform as well as one that has a good balance of speed, attack, and hp. Phorurex is no different, although it benefits much better from some stats than others. All of the people I asked said go with attack, and it’s no surprise. You want to get as much mileage as you can from that instant rampage. Not only that, but the on-escape will also love the extra attack, thus punishing swaps even better now. Speed won’t matter as much as it has priority, so very little speed is needed overall, but do not neglect speed as it could bite you in the rear if you run into a mirror matchup. No more than five is probably best as it’s not like much is sitting at 140 speed where this bird roams. After that, just dump everything else into health, and with over 4000 hp, Phorurex is able to get quite bulky with boosts and distraction effects. I then asked what’s the biggest appeal to Phorurex. And the answer was pretty consistent: all the abilities of so many different creatures wrapped into one. You have Phorasaura and Dracoceratosaurus wrapped up into one with no escape and bleed and just so much. It’s an ice cream sundae of a creature. It has everything you can imagine. I then asked what the biggest weakness of Phorurex is. Cwheels said it does struggle if you aren’t set up as it is a bit of a struggle waiting to run, but luckily Phorurex can still work around this. The worst matchups are resilients for this cunning, as well as creatures like Antarctovenator that can work against its bag of tricks. The big 2 threats that were constantly brought up were of course Testacornibus and Skoonasaurus. Testacornibus is especially annoying as when Phorurex runs away, Testacornibus heals and cleanses the bleed inflicted. There were many times where a Phorurex would run on my Testacornibus and then it could kill the Skoonasaurus that it runs into and just win me the match. Skoonasaurus is another problem due to its bulk as well as massive output on top of that. And with a priority impact itself, Skoonasaurus can work around Phorurex’s speed advantage. With many people fearing this bird, I asked these 3 if Phorurex should get a change. IDGT said that it should lose the pinning and stunning from the on escape move, while both Cwheels and Kelociraptor felt it wasn’t strong enough to warrant one. For me, I feel the instant rampage and sidestep should get some alterations to them, but that is because I personally hate moves that are strictly better than other moves. Maybe an extra cooldown turn on the instant rampage or a cooldown on the sidestep. And finally, I asked them about the Phorurex bug where it can pin unpinnable creatures, and it was a swift response of a priority. I agree. This is an issue, because you can actually use on escape abilities against the creatures with them, so it takes away that strategy as well as using it as a kamikaze bomber to then pin a Mammolania, thus taking away a plan with a random pin chance on anything.

As to using it in battle, Phorurex has 2 areas where it shines: as a swapper or as a revenge killer. This is easily the best revenge killer in the game, putting an actual revenge creature like Andrewtops to shame. That instant rampage is just too good, and with the on escape at its disposal, a weak creature will usually just take the fall. And as a swapper, you can use it at the end of something like Smilonemyes or Coelhaast to get massive damage off and potentially kill something with an instant rampage at the ready. However as the match goes on, Phorurex is best saved as a revenge killer as the swap does less damage, but it can be used as a way to get that last bit of damage in to set up a sweeper.

Despite Indotaurus being the mascot of the new update, there is a creature that clearly got more love from Ludia than the rest (especially compared to Andrewtops). If you can, go out and get all the Dracorex gen 2 DNA you can find because this thing is a monster in any environment. For me, this is a top 5 creature in the game with many putting it top 3 in the game right now. Thank you all for reading, and head on down to that Gamepress server link to vote on next week's creature feature. Have a good week and good luck in the tournament Friday!