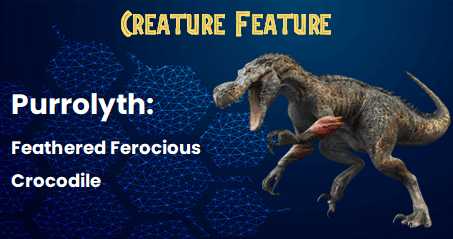 It’s that time of year again. The seasons are changing. The days start to get shorter (or longer). And especially this month, there is a holiday that sends chills down your spine. It’s October, or as I like to call it, Spooktober. So this month’s theme will be the scariest rare, epic, legendary, and unique hybrids. And to kick off this month, we have the terrifying rare Purrolyth. This feathered crocodile has had a bumpy past, but nowadays it is regarded as a top rare. So, how good is Purrolyth compared to other rares and how good is it in the meta itself? 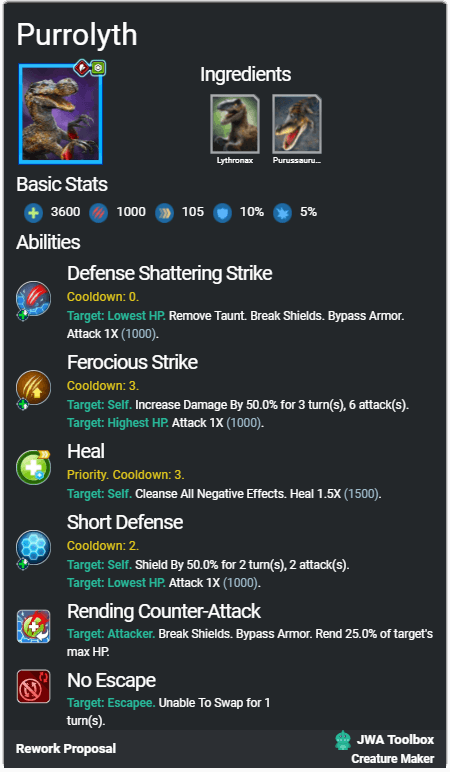 Let’s start unboosted as usual. Purrolyth has a great kit that flows quite well. However, the stats are just average at best. Below average hp, attack, really low speed, and no resistances hold it back. The reason why Purrolyth succeeds so well is all in the moveset. This moveset is very good on any creature, and this is why Purrolyth is a top rare. If you can get a setup with a shield or ferocious strike, Purrolyth becomes an even bigger thorn in the side of any creature facing it. And the setup is made easy thanks to no escape preventing that swap. In rare environments, Purrolyth sits at the top of the ladder. It can deal with almost every threat thrown at it minus a few creatures like Albertosaurus and Archaeopteryx. It can trap while dealing big damage to an opponent. And if you try to bleed it to avoid the counter, it can heal itself back up. And that heal is made even better if it has ferocity up, allowing it to heal another 50% of its attack. However outside of rare events Purrolyth begins to fall off that ladder. Yes it is still good, but there is something that is even better: Compsognathus. Compsognathus completely changes the game, and Purrolyth is a creature hurt by this change. And if Compsognathus was bad, Argenteryx is even worse. It can rally heal even better, it has 2 rampages with one being a cunning rampage, and the other dodging those counters. Not to mention both of these flocks have good pin resistance, so no escape is not much help in these scenarios. And in legendary and unique formats it doesn’t get better. Sure it has a good matchup here and there, but it’s not something to really consider at all. It’s best matchup Mammolania can just run away with pin immunity. It doesn’t really do anything at all, but being a rare this should not come as a shock either. At the end of the day, Purrolyth unboosted cannot really compete all too well, but it is still a beastly rare.

Boosts always change the game, and Purrolyth is no different from this. I reached out to Jackie from Apex Predators and Kelociraptor from Kelliance about Purrolyth. They have big beefy Purrolyths and seeing as we just had an advantage tournament with Purrolyth I asked them a few questions.

What is the best way to boost Purrolyth?

Jackie and Kelociraptor said the same thing here: a lot of hp. This way you can better get the counters off. Jackie then said to split attack and speed. This way you get more hp back when you heal while also being faster than the slower sauropods like Diplodocus or Ardontosaurus. This is important as it can just be a raw 1v1 matchup or a setup, but getting that shield or ferocity up is super important for really wedging yourself onto the field.

How good is Purrolyth in a rare advantage? What about ones that include epics and legendaries?

Both Jackie and Kelociraptor again said Purrolyth is at the top of the ladder in rare advantage tournaments. However this time, they say it can also compete with epics and legendaries, and I can also say that Purrolyth was a tough creature to face when running legendaries. It can really give creatures like Indoraptor gen 2 and Mammotherium a tough time with its counter and no escape. Epics are a bit rough as this is when Compsognathus reigns supreme, and Argenteryx won’t make things better. But odds are Purrolyth will still be able to run with those guys when a rare/epic hybrid advantage format comes around.

What is Purrolyth's biggest flaws. Do these flaws change from format to format?

Purrolyth’s biggest flaw is its lower health stat. While boosted it is good, it still isn’t that much to begin with. 3600 base hp is quite low. And for a creature with a counter, the more bulk the better. Also, the other big problem has again to do with survivability. Short defense is not that reliable to help prolong Purrolyth’s bulk die to the fact that many creatures can stall it out before Purrolyth has the chance to throw it back up. And on top of that, with the way healing works, if Purolyth heals the second turn after the shield is thrown up, it’ll fade as that is Purrolyth’s turn, so many creatures can take advantage of that weak spot. However, these weaknesses are pretty consistent from format to format. The only real problem comes with better creatures introduced every time a higher rarity is allowed.

Can Purrolyth have any hope of competing in the arena?

Both Jackie and Kelociraptor do not see Purrolyth as viable for the top arenas. Purrolyth will only see time in the arena up towards the lower end of Lockwood Library at best. You have too many creatures like Mortem Rex and even its superhybrid Grypolyth able to just outclass it while also destroying it in the process. But down in the lower arenas, Purrolyth will be one of the best rares around.

When it comes to using it in battle, both Kelociraptor and Jackie had the same idea when it came to using it: at both ends of the battle. Kelociraptor said she leads Purrolyth if she has another creature with no escape to just win a matchup and get momentum for her team rolling whereas if she doesn’t have a no escape creature, she waits to use it to get that final kill. And Jackie also brings up the fact that the end of a battle is when a flock is at its weakest, so Purrolyth actually has a chance of taking it down. Purrolyth can work in the middle as a revenge creature too, but that requires more situational scenarios.

So at the end of the day, Purrolyth is a solid rare that is easy to make and level, which makes it perfect for advantage tournaments. It has OK stats, good moves, and a good role in many different metas. Is it the best rare out there? No. But unless it gets any changes in the future, make sure you watch out for Purrolyth is any rare events ever role around. Thanks for reading and stay tuned for next week where the spotlight will shine on the scariest epic. Have a good week and good luck this weekend.