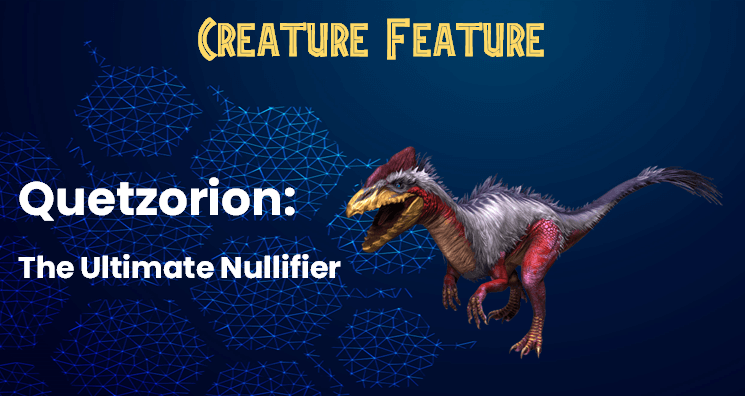 When it comes to nullification, you can’t do much better than Quetzorion. Released way back in 1.8, this feathered terror was one of the fastest hybrids around, and currently it is still tied for top 5 fastest hybrid in the game. Stemming from Tanycolagreus, this guy was meant to be the best nullifying creature in the game when it was released, and with nullifying rampage it was. Times have changed and Quetzorion fell to the wayside. That is until 2.11, when Ludia gave it a bit of love. So with this buff, is Quetzorion able to nullify the meta once more? 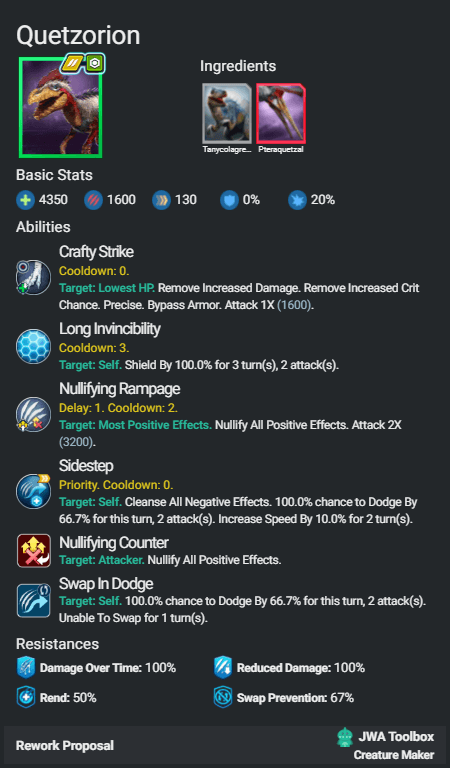 Starting unboosted, Quetzorion is really appreciating the buffs Ludia gave it in the last patch. The most important of the 2 was the damage buff, as now it can dish out 4500 in 2 turns every time. And with a 20% critical hit chance, it can sometimes deal a little extra. The health is also pretty solid for something this fast. 4350 is nothing to sneeze at, and with long invincibility and sidestep, Quetzorion can tank hits and deal damage. When it comes to nullification, they don’t come much better than this. With a nullifying counter and nullifying rampage, you can kiss your sweep positive effects, like a long protection or a ferocity boost, goodbye. And even if you don’t hit it when you gain a ferocity boost, it can still use crafty strike to get rid of those while bypassing the armor that many resilients rely on to tank big damage. When it comes to speed, Quetzorion is at the top of the ladder. While other creatures like Monomimus and Dakotanops are faster, who is going to use Dakotanops when Testacornibus and Phorurex are running around. The only unique rival in speed is Pterovexus, and while it is debatable as to whether it got a buff in 2.11 with its changes, it still couldn’t match Quetzorion or really much else in the meta pre-2.11 or post-2.11 if it tried. So if you need to pick off a creature, that Speed on Quetzorion will save the day. But Phorurex can break the speed tiers with its terrifying instant rampage. Well, Sidestep can come in handy here, allowing Quetzorion to easily tank that hit while gaining a speed boost of its own while cleansing any negative effects it may have. And speaking of dodging, Quetzorion can come in handy here with its swap in dodge, allowing it to dodge any hit. While not the best thing on the world, it’s better than nothing. And finally when it comes to resistances, Quetzorion is no slouch. With bleed and distraction immunity with rend and pin resistance on top of that, Quetzorion can really mess with both fierce and cunnings.

Boosts will always change the name of the game, and Quetzorion cannot escape this fact of the game. Luckily I have GP’s Bart here to help me out as a bit of a Quetzorion expert.

What is Quetzorion's biggest strength?

Bart really likes the versatility that Quetzorion has. With high speed, good output, and a moveset that really doesn’t struggle against a single class, Quetzorion can really deal with many different threats thrown at it. However, Bart says that Quetzorion has some incredibly important matchups being Gorgotrebax and Phorurex. These 2 are shaping up to be absolute monsters in the meta and being something that can take both of them is a pretty good quality. And even if it does lose, Bart points out that it can never really be shut down. Even tanks like Testacornibus will take massive amounts of damage while fighting Quetzorion. As for slower cunnings like Erlikospyx and Spinoconstrictor, they are completely helpless against this tiny terror. Long invincibility can absolutely shut down must cunning attempts to attack and take down Quetzorion.

What is Quetzorion's biggest weakness?

Bart points out 3 big weaknesses for Quetzorion: swappers, stuns, and boost spreads. Swappers are always a problem for something with no on escape move, and Quetzorion is not immune to this. With Quetzorion’s mediocre turn 1 options, it is pretty susceptible to an attack from a Monolorhino or Ceramagnus. And with these 2 especially comes Quetzorion’s other big weakness in the form of stuns. Quetzorion can easily take down Scorpius rex gen 3 when toxic quills is down, but when it’s up, Quetzorion can be in trouble. Thoradolosaur at lower levels is an issue with instant charge at its disposal, allowing to handily take out Quetzorion with a big hit and threatening a stun right after if Quetzorion tries to dodge. Finally, the boost spread is a hinderance for Quetzorion. A creature in a boosted environments wants to be something that really focuses on 2 stats. Skoonasaurus and Testacornibus focus on damage and hp while something like Indotaurus focuses more on hp and speed, and they are all top threats. Quetzorion needs to focus all 3 stats, which means pros in some major areas while major drawbacks are seen in others. If you focus on speed and hp, then you really cannot kill much in 2 hits, allowing it to be easily killed. Neglect hp and you’re in swap range turn 1. Focus on attack and hp and then a faster Erlikospyx or the occasional speedy Phorurex will wipe you off the face of the planet. Bart says that mostly attack and hp is better to focus on, and his build allows him to easily deal with Gorgotrebax, which is a growing threat in the meta, but something else like a Monolorhino can take advantage of that lower hp and ruin its day.

What are the worst matchups for Quetzorion?

Bart says Quetzorion has 2 big weaknesses. You have your big tanks like Skoonasaurus and Testacornibus who just absorb blows while dishing out big damage. You also have chompers like Mortem and Thor. While the latter isn’t as strong in the meta, they are still readily used to deal with creatures like Testacornibus. Surprisingly, Quetzorion is a very good counter to Mammolania, but this is for reasons involving persistent ferocious strike and the nullifying counter. However, despite it losing, Quetzorion can dish out big damage and can pick off some of these creatures like Testacornibus.

What future do you see for Quetzorion?

While it may not have the best future around, Bart points out that it will always have some sort of niche as long as creatures like Spinoconstrictor and Phorurex sit on top of the meta. As for lower arenas, creatures like Magnapyritor, Erlidominus, or Indoraptor are all popular picks, and Quetzorion can rip through them all like tissue paper. Gorgotrebax is becoming more and more popular, and Hydra Boa could make a big splash as well. And with a meta where cunnings are beginning to dominate more often, Quetzorion could have a bright future ahead.

When it comes to using Quetzorion in battle, you want to use it in 3 different scenarios. First up, you can use it as a swapper. You see something like an Erlikospyx going for an impact, swap it in, and then take it down while only sacrificing a small chunk of hp. Second is for the revenge kill. Set up that nullifying rampage by picking off a slower creature. And with its high speed, odds are Quetzorion will have the speed advantage. Finally, just throw it in when you see something that you can easily set up a shield on and win. Creatures like Haast Maximus or Erlikospyx can’t do anything with that shield and need to either take the loss or risk swapping out into something else. Bart recommends to save it for the mid or late game, where a revenge kill or swap opportunity is more likely to occur.

That’s Quetzorion. It did quite well in the last unique event and that buff has really helped it do better in the meta. While not as good as Phorurex, it’s nice to see something that was pushed to the wayside back in some sort of spotlight again. And with dodging and distraction becoming more common, maybe we’ll see Quetzorion make a comeback. Thank you all for reading and tune in next week for whatever you all vote for in the GP discord (which you all should join). Good luck in the tournament tomorrow and don’t forget to dart your chompers, because they’re all good. Happy playing.