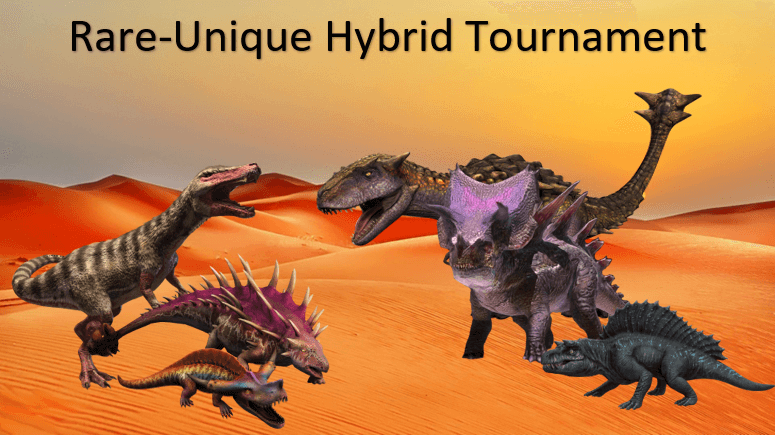 It's tournament time again, and this time it's a unique tournament with hybrids only. Normally the hybrids part doesn't matter, but with Rexy, now it 100% does. But anyways, there has been a bit of time since the last unique tournament, so much has changed. So, let's get into this right away!

This Tournament is a Rare, Epic, Legendary, and Unique Hybrid Tournament. The rewards for this Tournament are boosts, and a lot of them. These are an important resource that only comes by once in a while, so make sure to partake in this event and get as many as you can.

First up on the list is Parasauthops. This is gonna be your creature devoted to being a swapper. With a swap that can bypass armor and shields as well as 3 healing abilities, it's a pain to take down. And with solid hp and damage, this becomes even harder to deal with. Thankfully it's slow and has trouble with armor while on the field, so you can use that to your advantage. And with no resistance to vulnerability, creatures like Testacornibus can wear it down.

Next up we have Andrewtops. This creature does crazy high damage and has the highest turn 1 damage in JWA history. You have good speed, crazy damage, and decent hp with a bit of armor and distraction to go with it. And on revenge, you have a rampage at your fingertips or a priority rending attack to get the jump on faster creatures. It's mostly used as a revenge killer, but if you predict a swapper like Parasauthops, you can swap it in and use it's counter and high damage to kill it. This is something you'll want to have on your team.

Troodaboa last time underperformed. However this time, it's back and has the benefit of a strike with priority no matter its hp. And with good abilities and that counter, Troodaboa is poised to have a better showing this time around.

Skoonasaurus is still going to be a big wall with many tools at its disposal. And with no Ankylos Lux to ruin its fun, Skoonasaurus should do much better here. You can distract, slow, induce vulnerability, and throw up a shield. And on top of that, your multipliers are all group moves, so be gone pesky flocks. While not as dominant as it was, Skoonasaurus is still something to watch out for

Ardontognathus is going to be a popular pick with its multiple rally healing abilities, armor piercing moves, and big multipliers. Not to mention an on escape that provides invincibility and killer resistances. It does face trouble turn 1, but once set up, it's hard to slow down.

Now we're getting into the new guys. First up is a must have. Albertocevia has the highest swap in base damage in the game right now. And on top of that, this swap is a devour move, precise, and can bypass absorb. And that's just the swap. You have good speed, great resistances, and solid hp with that high attack stat too. And then the moveset. First you got your shattering strike, which isn't bad. But then you got distracting blow, which can be a distracting impact without revenge, or it can be a distracting rampage that also reduces damage by 100% on revenge. Not only that, but you also have instant ferocious revenge, which is basically a priority ferocious impact. And then you have precise revenge for those flocks, because while normally the same as precise rampage, on revenge it's a group attack and can one shot Ardontognathus. Just throw this on your team.

Another new kid is Allodrigues. With high attack and speed a good resistance set, and a turn 1 rending takedown, this thing is hard to stop. And unlike its counterpart Dodocevia, Allodrigues has on escape roost, which allows it to start getting critical hits with that high damage. And if it sets up on you, well good luck because it'll hurt to stop it.

Giganyx is the newest unique and it's an interesting one for sure. For starters, you can never count it out with crushing showdown, allowing it to swap in and heal itself back to full hp with a boost. And then on top of that, it's got good bulk and output as well as speed control with ferocious restore and a good resistance set. This thing can definitely be a wildcard.

Another flock you may run into is Ankylodactylus. While it lacks rally healing abilities, the abilities it does have make it a pain to remove. It's got priority, a good set of resistances, and solid stats across the board. Not to mention it matches up pretty solidly with all the other creatures in the format.

Speaking of flocks, we have another flock in Tarbognathus. Tarbognathus has big damage, priority, and one of the best on escapes in the game with on escape impact. And with good healing abilities, Tarbognathus can easily wear you down or can be saved for a revenge kill.

Finally, we'll end on quetzorion. With high speed, decent bulk, and good damage, it's hard to stop this little terror. And with that nullifying counter, rampage, and crafty strike, it's hard to use positive effects against it.

That's all for this weekend really. There are a few other creatures you can use. The newly buffed Indoraptor could show some promise as can the newly buffed Entelolania. You also have some other creatures out there like Scorpios Rex gen 3, Indotaurus, Fukuimimus, Thylaconyx, and Phorurex (man, it's weird to see those uniques now being honorable mentions, but hey, powercreep). Good luck this weekend and make sure to not miss out on your Giganotosaurus and legendary/unique attempts. Happy Playing!