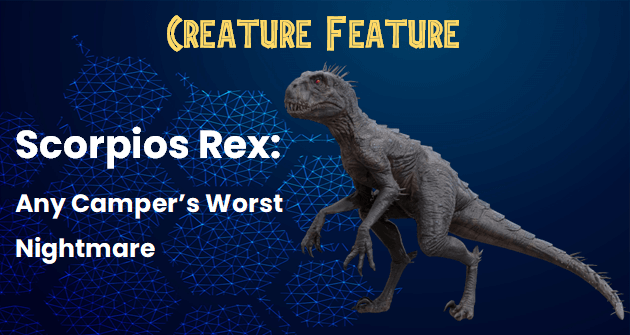 After Fallen Kingdom, many people thought hybrids were not going to make an appearance in the official Jurassic World cannon. However Camp Cretaceous has brought a 3rd hybrid to the spotlight. Scorpios Rex terrorized these children with its venomous quills and relentlessness. Ludia soon after took Dr. Wu’s first hybrid and brought into JWA with not 1, but 2 more Scorpios Rex variations with their own kits and abilities. But how does the original Scorpios Rex stack up to the meta in JWA.

Starting unboosted, Scorpios Rex has pretty average stats across the board. It has lower hp than average, slightly attack than average, and speed that is middle of the road. So, with these average stats, how does it do in the meta. That’s where the kit comes in. The kit elevates Scorpios Rex above mediocrity by a lot. First up, it has a solid strike with fierce strike to cleanse vulnerability. Next it has cunning impact, which is again a nice turn 1 option and is never a bad move to have. Then we got its priority move in camouflage, which is a really good move. It’s defensive, offensive, and spammable. And this comes in handy with creatures that are faster and struggle with precision and distraction like Dodocevia and Tryostronix. And finally, you have the quill move that all versions of Scorpios Rex have. Scorpios Rex gen 1 has lethal quill shot, which is distracting impact with 25% bleed over 2 turns on top of that. The problem with this is that there is a delay on this, but thanks to camouflage or cunning impact, it can quickly get those quills ready. It is a shame though that it’s the only quill move with a delay. The final move has is swap in critical ambush, which is essentially camouflage on the swap with a 50% critical hit boost. This can allow Scorpios to swap in pretty safely and then set up for those quills. On top of this moveset is a solid set of resistances. Scorpios is immune to slow and is 75% resistant to pin and stun, which is really good for any legendary to carry. On top of that, it has some distraction and vulnerability resistance which is never bad either. All in all, Scorpios Rex manages to make itself one of the top legendaries in the game with others like Eremoceros and Coelhaast.

Boosted Scorpios Rex is another story. Luckily, I have IDGT here to help me as he recently tested out Scorpios Rex in the shores not to long ago. Boosts can always change how well a creature does. So, how well does Scorpios Rex do in a boosted environment?

What is the best boost spread for Scorpios Rex?

IDGT said to only put a bit of speed onto Scorpios to outspeed some faster creatures, but not much is needed because it has 2 moves that increase speed by 30%, which is already quite a bit. Then shoot for 2000 attack, and this allows you to deal big damage with its impacts and can 2-turn many legendary creatures that are not flocks. This can also better allow Scorpios Rex to set up and get its quills ready. Finally, dump the rest into hp. With its distraction and evasion abilities, it’s not easy to take down something with around 6200 hp.

What are some of the strengths of Scorpios Rex in terms of matchups and kit?

With its critical ambush and camouflage, most fierce creatures struggle to deal with Scorpios Rex. It can always distract an opponent, it can dodge big hits, and put on pressure with bleed. Resilients can also have the pressure put on them with the bleed. Scorpios Rex can even deal with some cunnings like Phorusaura by swapping in on them and then outspeeding them with ambush. And with its resistances covering all 3 classes, Scorpios Rex is able to deal with all their effects. And with camouflage being a move that has no cooldown, it can throw off an opponent and make Scorpios more unpredictable than its gen 2 and 3 counterparts. And finally, as an interesting fact for Scorpios Rex gen 1 and 3, swap in critical ambush is a swap move with priority. So, if your opponent sends in a faster Dracoceratops, it will still be distracted and could be evaded.

What are the biggest weaknesses of Scorpios Rex?

IDGT and I agree that one of the biggest issues for Scorpios Rex is the inability to use its quill shot turn 1, which is a big weakness in comparison to its gen 2 and 3 counterparts. You can thankfully stall and wait out the delay with either its impact or camouflage, but it is still a bit of a drawback to it because lethal quill shot can apply so much pressure on any creature. You can distract them for 2 turns and apply bleed. You also have creatures like Mammotherium who are popular picks and can usually take it down in 2 turns. Again, if Scorpios had the ability to use its quills turn 1 it could better deal with threats like these and apply more pressure with bleed. You also have other smaller issues like no stun immunity and just average stats, but the biggest issue is that delay on the quills.

What future do you see for Scorpios Rex?

IDGT said Scorpios Rex will be a safe pick for quite some time. It has its fair share of counters and probably isn’t going to be changed in fear of being broken, but it also is one of the better legendaries in the game with its abilities to fight off against many classes. It has options and tools to get it out of almost any sticky situation. It has its issues, but if you want a safe legendary, you cannot go wrong with Scorpios Rex.

When it comes to using Scorpios Rex in battle, there are really 2 situations where you should use Scorpios Rex. First up is the revenge kill. You see something in range of an impact, it’s not a bad idea as you get the quills ready for the next creature. The most common time to use Scorpios Rex is using it as a swapper. The swap is incredibly safe and also allows it to outspeed every creature out there at base levels and even some nitro creatures can still find themselves slower. You also increase your defenses with evasion allowing to defend yourself against instant attacks like instant rampage. Scorpios Rex is defensive enough to be able to come back into a match multiple times. Just try to not lead it unless necessary.

That’s Scorpios Rex. While not as terrifying in game as it is to Kenji and Darius, it is still a legendary to never underestimate as it can easily mess up any player that isn’t prepared for it. It has coverage for all the classes, it has a good kit, and it has no bad stats. As long as the meta isn’t full-blown cunning, Scorpios Rex will always be a solid legendary pick. Thank you for reading and stay tuned next week for the next creature feature.