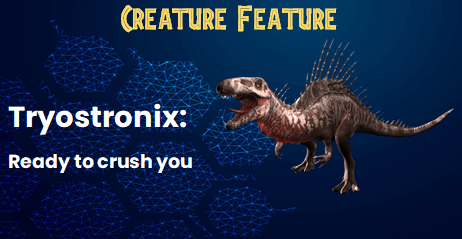 Hi everyone, sorry for the delay on this one. This week we have our first legendary creature feature, and it’s one that has always stuck around for a long time. Today we’ll be looking at the zombie-like Tryostronix. This creature is an interesting one. With two moves that  buff its stats and 2 fierce moves, Truostronix is a pretty unique legendary. So, does this legendary raider have what it takes to compete in the arena? 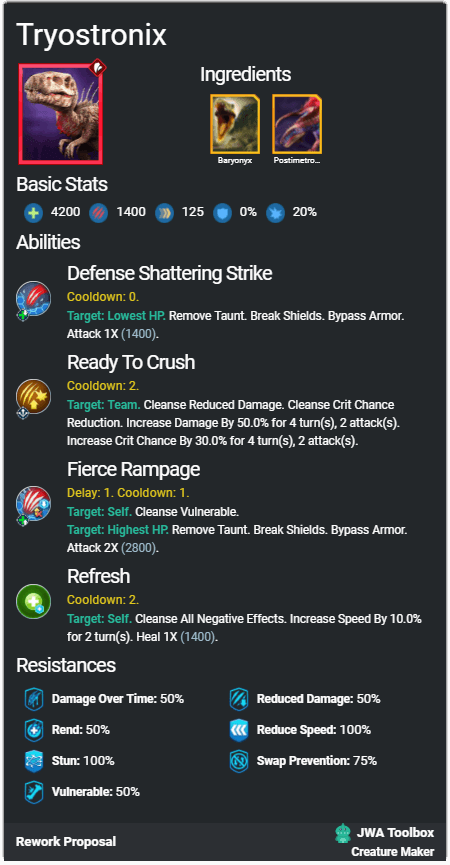 Let’s start unboosted. The main appeal to Tryostronix comes in the form of those resistances. With both deceleration immunity and stun immunity, this legendary is a fierce that can ruin a Monolorhino’s day. And with a great critical hit chance and ready to crush, counter creatures like Grypolyth and Testacornibus won’t get their nasty little counters off on Tryostronix. And with Refresh, it can get the jump on faster opponents like Alloraptor. When you look at the stats, the most outstanding of them is the speed. 125 speed is pretty good for a chomper like Tryostronix. This allows it to set up on a slower opponent with a strike to get that rampage off. And with a distraction resistance, Tryostronix will always be able to squeeze out some damage in almost every scenario. However, when you look at this creature, you can tell it’s torn between raids and PvP. It has good stats and abilities, but they aren’t amazing.

Before I get into this, I would like to thank JAMMYDODGER2012 from Rex on the Beach and IceBlaze from Frozen Cave to help me gain a better insight into Tryostronix.

Now going onto the arena and tournaments, and this is where Tryostronix gets interesting. Based on the legendary and arena metas, Tryostronix seems to do much better in an arena setting rather than a legendary tournament setting. Why is this? The reason is simple: Coelhaast. Coelhaast is such a dominating force that Tryostronix really cannot stand much of a chance against these flying lizards. Along with Coelhaast come other cunnings that also hurt Tryostronix. Phorasaura, Grylenken, Rinchicyon, Smilocephalosaurus, and if epics are also fair game, Compsognathus all can walk over Tryostronix. It does appreciate the rend resistance to stop Dracoceratops, but Monostegotops and Megistocurus especially can do major work on Tryostronix before it can get a good hit off. But now let’s move onto the Uniques meta, and this is where it get’s a bit interesting. Luckily we had a unique tournament the other week and got to test out the new and scary Indotaurus and Phorurex (as well as the disappointing Andrewtops), and this is a meta that is probably better suited for Tryostronix due to what probably was the king of the meta: Testacornibus. While Phorurex was terrifying, Testacornibus still caused more issues than most creatures combined. I persoanally dropped Skoonasaurus for Entelolania due to Testacornibus. And guess who can easily take care for Testacornibus? That’s right, it’s Tryostronix. While not as reliable as say Indotaurus or Antarctovenator, its stun immunity allows it to better hold off creatures like Monolorhino. With boosts, you want to stick around the 6000 hp range and shoot for 2000 attack at least. And if you go somewhere around 145 speed, a refresh will put you at about 160 speed, outspeeding most cunnings like Erlikospyx and Magnapyritor. That attack will also put some major hurt on a Testacornibus or Geminititan without ready to crush and it has a decent amount of hp to tank a hit from almost anything.

When it comes to using it in battle, Tryostronix is best saved for last according to JAMMYDODGER and IceBlaze, you want to wait till the end of the battle when you know the swappers are pretty much gone, and if you can set up the rampage at the same time, that is a huge. But thanks to it’s pin resistance, it can also leave if creatures with no escape come in to try and prevent your last creature from possibly winning the battle. Starting with Tryostronix is really risky as there is probably a Scorpius Rex or potentially a flock that can come in and bait out a ready to crush. But at the end of a match, no one wants to take a rampage from this monster.

So when it comes to its overall viability, does it have what it takes? Yes, up to a certain point. IceBlaze said that while Tryostronix is a great fierce legendary, you probably won’t be seeing it in shores anytime soon with better options like Mortem Rex and Scorpius Rex gen 3 as well as big counters like Skoonasaurus and Antarctovenator, but it can still work decently well. And for something that is also the best legendary raid creature around, that’s a win in my book. If you’d like to vote on next week’s creature, make sure you vote right now! And while you’re doing that, don’t forget to go out and dart your Alberts. See you next time.