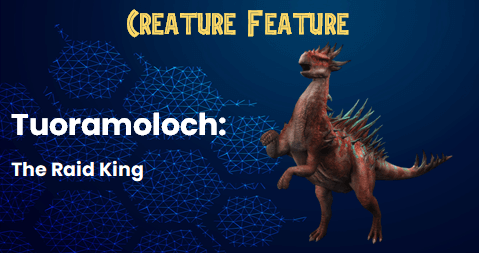 Today we’ll be doing something a little differently. Usually I look at a creature and how well it does in PVP and discuss its strengths and weaknesses. However, not all creatures are built to battle in the arena. Some are designed in a feature that was added in 2.0: raids. Many creatures are designed more for raids and have lousy kits for the arena. A strong example of this is Irritator, who has garbage moves in PVP, but strong team support. Other big raid creatures include Skoolasaurus, Tragodistis, Bajatonodon, and Gorgosuchus. But if there is one raider that reigns supreme, it has to be Tuoramoloch. Why is this unique the king of raids? 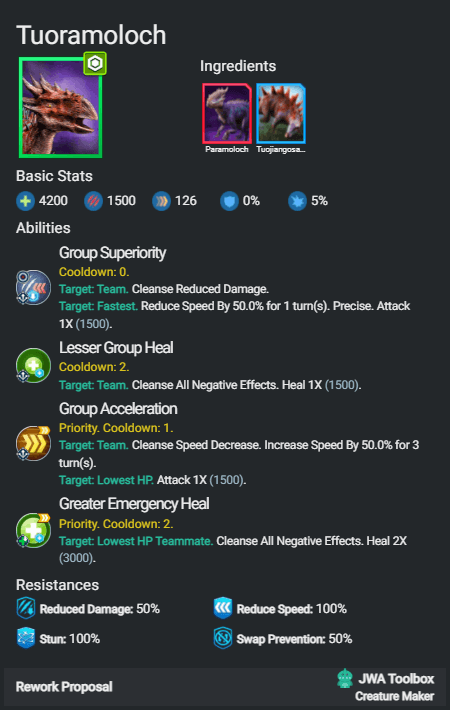 Starting unboosted, Tuoramoloch has some great base stats. It has decent hp and very good attack and speed while having a typical 5% crit and no armor. With that speed and attack, it can make use of its 2 healing moves to stick around for a long time. However, with no multipliers, it doesn't do well in a PVP environment. It usually heal stalls until it goes down. However for raids, it has some beastly good moves. For starters, every single move can contribute to the team. Group superiority has the ability to cleanse the group of all their distraction while slowing a minion or the boss. Group acceleration cleanses the team of deceleration effects and gives everyone a 50% speed boost. And with priority, everyone will get their hit in before the minions. And with 2 healing moves, it makes sure your team is able to still dish out damage. And because regeneration is based on attack, Tuoramoloch can regenerate a lot of hp for the team. And with all of its moves having no more than a 2 turn cooldown and being available at turn 1, it can cycle between 3 moves every round. And with group acceleration having a 1 turn cooldown, it can function in a strategy with a 2 turn round strategy.

Again, this is going to function a little differently than my normal creature features. However, raids (at least the higher rarity raids) all involve boosts. And thankfully, I have two alliancemates that I raid with all the time to help me out today. Sel and Chappy both have big Tuoramolochs for raiding, so I asked them a few questions about it to see if it's the raid creature you're looking for.

For raids, what is the best boost spread for Tuoromoloch?

Chappy and Sel said that a good Tuoramoloch should focus primarily on attack, with around 2500 being the maximum you should go for. Anything higher than that is a bit overkill. This allows Tuoramoloch to get off a good hit with group acceleration or to regenerate a lot of hp, especially when boosted by ferocity. As for hp, they both have a little over 6200 hp in order to soak up some big hits as many apex raid bosses like Mortem Rex and Gorgotrebax hit really hard. Tuoramoloch can easily function in raids without speed, but with many players liking speedy chompers like Thoradolosaur and Mortem Rex to be fast, a Tuoramoloch at 136 speed can still maintain priority and use something like group superiority to cleanse distraction before they unleash a powerful hit.

How Important is Tuoromoloch in the grand scheme of raiding?

Both Sel and Chappy say it's the most common raid creature for apex raids and for good reason. Group acceleration is such a powerful team tool as it allows you to get rid of those minions as soon as possible, which is crucial for many raids. Also those double heals are really good at maintaining your team's strength throughout the raid, as many apex raids require some sort of healer as these bosses do massive damage. It just does so much team support that it can bring back a team during a raid with its support.

What are some weaknesses of Tuoromoloch in raiding?

For most players, Tuoramoloch is going to be a necessity, but for some players, these strats take a bit longer due to weaker creatures, which Tuoramoloch can work with. But with some of the beasts that the top players have, many times Tuoramoloch just isn't needed. However, it is for the majority of players, which is a good role. But despite its strengths, it has some weaknesses. First up is the investment. It's a big investment for something that can't be used in the arena. It takes time to get the DNA as well as coin to level it up and boosts to make it viable for raids. Chappy also points out that Tuoramoloch is something that is easily targeted by the boss as many of their attacks target the fastest creature, the bulkiest creature, or the creature with the most damage, and Tuoramoloch can be all of those. And with no vulnerability immunity or armor to help with the bulk, it can go down despite the large amount of hp put into it. However outside of PVPO, it really doesn't have too many weaknesses.

For the arena, how far will Tuoromoloch get you?

Chappy and Sel say it isn't a creature meant for the arena, but it is annoying in the arena. With good hp, attack, speed (especially with group acceleration), and 2 healing moves, it can annoy any player. However it will only get you so far. Chappy originally had it until it was replaced by another creature that was actually suited for the arena. But Chappy did mention that you can make it to the Library with Tuoramoloch being a good member of the team, but that's really the limit unless it is carried by some good creatures. It's not a bad thing to level and use while slowly getting that apex and unique DNA from raids.

When it comes to using Tuoramoloch in battle, you should really just put it on the bench unless you have nothing better. However, it can be a good revenge killer with high base attack and group acceleration. It can swap in on some creatures and pick them off with group acceleration and then can just heal up next turn. However at the end of the day, this thing is not designed for a PVP arena and should only be used if you have nothing better.

That's Tuoramoloch. Probably the most important raider in the game with all of its tools blending into this absolute beast. It can play so much support that most players will rely on it for the majority of their time playing the game, if not all of their time on the game. If you got a friend or an alliancemate out there with a big Tuoramoloch, make sure you keep close to them because odds are it'll bail you out in so many scenarios. Thank you all for reading and make sure to go out and dart the rest of your rares as well as all of your epics tomorrow. Also see you in the tournament tomorrow. Happy Playing!