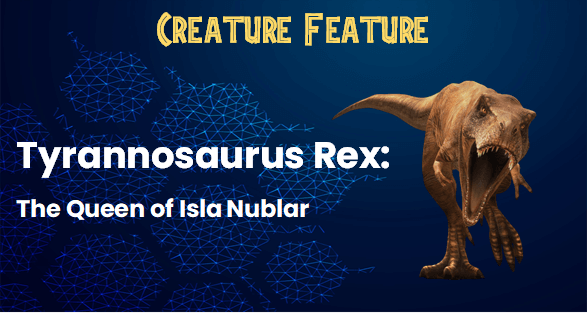 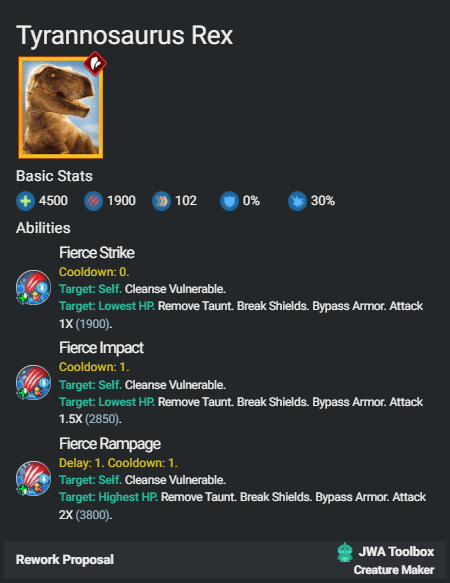 Starting unboosted, Tyrannosaurus Rex is tied with Tenontorex for the 2nd highest base damage in the game with 1900 attack. It is also the slowest epic in the entire game and the 5th slowest creature overall. That stat is made even more lethal with the 30% critical hit chance, which is pretty decent for a creature like this. The hp is a standard 4500. So obviously this thing is here to hit hard and do not much else. If you can bring it in on a creature that was slowed and is in range on an impact, great. However, Tyrannosaurus Rex doesn’t have much else going for it. It has no resistances at all with a kit that is purely fierce, and this isn’t that great as nowadays fierce is struggling in the meta with flocks. It can get lucky with evasion, but it fails to do anything against distraction. Being the 5th slowest creature in the entire game isn’t that helpful for it as you’re an easy setup for almost any creature out there. Something like Secondontosaurus, Edaphosaurus, Stygimoloch, or Megalosaurus can take advantage of that speed. And on top of that, there is little point in using Tyrannosaurus Rex when Allosaurus gen 2 and Acrocanthosaurus exist. They may lack the output, but Allosaurus gen 2 has the resistances and a better critical hit chance while Acrocanthosaurus has one more speed and 300 hp, which may not sound like much, but it makes a substantial difference in many matchups. Also, both creatures have access to cleansing moves while Tyrannosaurus Rex does not have anything. It’s not bad in an unboosted format, but not amazing either due to its ability to get set up on and because it’s just outclassed in every way.

What is the best boost spread for Tyrannosaurus Rex?

Mattylus said you want to shoot for 20 speed, with the most common build being the 0/10/20 build. At 142 speed, Tyrannosaurus will get the jump on most tanks now and still have enough damage to really hurt anything slower or faster than it. Mattylus built his to be a bit bulkier as Tyrannosaurus is already doing a lot of damage anyways, but he still has it at 142 speed. You can also have much bulkier builds with Tyrannosaurus sitting at around 120 speed. While these builds have some advantages, they are much more niche.

What are the biggest strengths of Tyrannosaurus Rex?

What are the biggest weaknesses of Tyrannosaurus Rex?

While Tyrannosaurus gains many strengths while boosted, there are still many weaknesses that still plague it. Once again, it is just outclassed by other fierce creatures. You have Indominus Rex gen 2 and Secondontosaurus with better resistances. You have Acrocanthosaurus, who has access to cleansing abilities as well as more bulk and speed. Andrewsarchus and Baryonyx can go much faster while being immune to deceleration. Speaking of immunities, Tyrannsaurus has none. This again is always a problem as it can be bled, stunned, distracted, or slowed. Like in yesterday’s article on Glyptodon, Rex now loses to a standard Glyptodon because it has no immunities, allowing something like Glyptodon to pick up the kill. While it does gain many strengths in a boosted arena, those same weaknesses come back to bite it.

How far will Tyrannosaurus Rex get you?

In an advantage tournament, Tyrannosaurus Rex, despite its flaws, can still get you decently far. There are much better options, but Tyrannosaurus in a setting like this can work pretty well still. However, in the arena, there are many more creatures out there that hurt you. It can get you further than most epics, however in order to reach arenas like Library, it would need some major help from its teammates. While it isn’t a creature you’ll see in the end game, it can bring something to the table in lower arenas.

When it comes to using Tyrannosaurus Rex in battle, Mattylus says you typically want to use it as a set up. Come in on an injured creature that is slower, hit it with an impact, and now whatever comes in is taking a rampage, and nothing really wants to take a rampage from a Tyrannosaurus Rex. He also likes to use it as a lead in advantage tournaments as usually it will wipe the floor with most leads seen there. You just want to get it in a position where it applies a lot of pressure, and that’s something Tyrannosaurus can do. And if you find yourself in an unfavorable matchup, you can always swap to a swapper, because odds are Tyrannosaurus Rex did enough damage to get something in range.

That’s Tyrannosaurus Rex. While not as threatening as it is in the films, it can still strike fear in the players that aren’t well adapted to an epic advantage tournament. It has the decent bulk and high damage that can be a problem. And while nowadays it has become more outclassed than many epics, it always has the high damage to never be counted out of a battle. Thank you for reading and stay tuned until tomorrow to see what the next creature is.