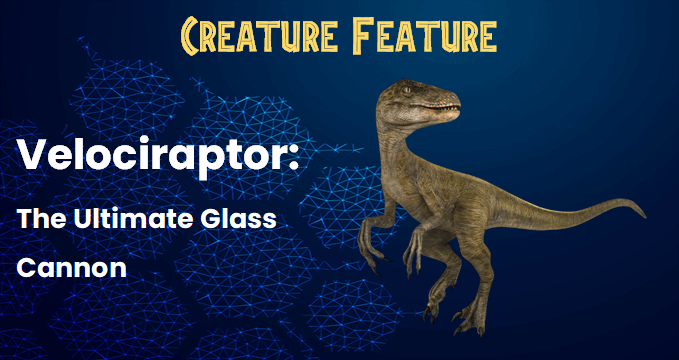 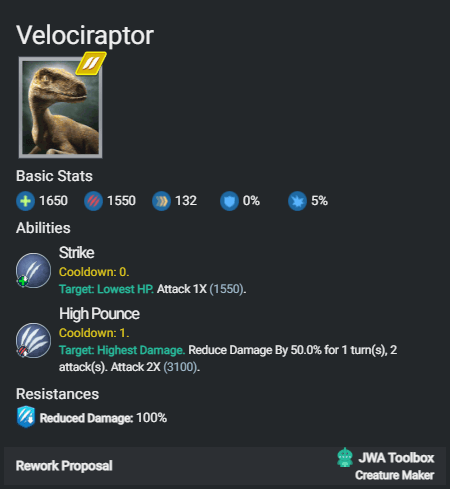 Starting unboosted, many stats of Velociraptor that stand out. It's got really good damage. Anything above 1550 needs to be respected, especially when it has pounce available to it. It also is tied for the 3rd highest speed available to it. If also has the lowest hp in the game, with only 1650 to keep it going. This is your ultimate glass cannon. It dies in one hit to so many creatures but has a lot of burst output with that pounce. It's all or nothing with Velociraptor. It has a really good immunity with distraction immunity, thus allowing it to do full damage with that pounce. The issues come after it uses pounce, because it's then stuck with strike, which leaves it completely open for attack. So hopefully you can kill something with a strike or swap out, because Velociraptor can't take a hit really.

Boosts can always change the outcome of something. Creatures can always go up or down in a boosted meta. Velociraptor is no different. Thankfully I have Mattylus here, who uses it on his arena team. I shot him a few questions and asked how good Velociraptor was in the meta.

What is the best boost spread for Velociraptor?

For a boost spread, Mattylus said put at least one boost into hp. That way a max attack Dracorex cannot kill you on the swap, although Rhino usually can. But after that, he has a pretty even split between attack and speed. You want to be faster than everything and get that pounce off while doing a lot with that pounce.

What is Velociraptor's biggest strengths?

One of the biggest advantages of Velociraptor is the speed. That means it's going to have priority most of the time and get that pounce off. Also, with the high damage, it's doing a lot to anything that gets hit with it

What is Velociraptor's biggest weaknesses?

When it comes to weaknesses, Velociraptor has quite a few as a common. First up is the limited move pool. After a pounce, anything can really come in and kill it. It's also really frail and some max attack creatures like Ceramagnus or Woolly Rhino can kill it on the swap. It struggles with shields, armor, and dodge as well.

How far will Velociraptor get you?

Like most commons, Velociraptor won't get you really far. However Mattylus is around the library and runs it, so you can get far. However it will really rely on its teammates to carry it there. It's one of the better commons, but commons only get you so far at the end of the day. But it will help you in the right direction.

When it comes to using Velociraptor in battle, Mattylus likes to lead off with it. Pounce something and either kill it with a strike or just kill it in one hit. Odds are it's not going to stick around for long, so just use it to quickly punch a hole in your opponents team and plan from there. However maybe keep it away from the really bulky creatures and save it for later.

That's Velociraptor. It's not as good as it once was at the start of the game, but with many more creatures added and after so many years it's not a surprise that it has been pushed to the wayside. However, it is one of the best commons you can find and has a unique place in the game nonetheless. Thank you for reading and make sure you tune in tomorrow for the next creature feature. Also don't forget to get those last rares and participate in the tournament for Andrewsarchus and Glyptodon. Happy Playing.