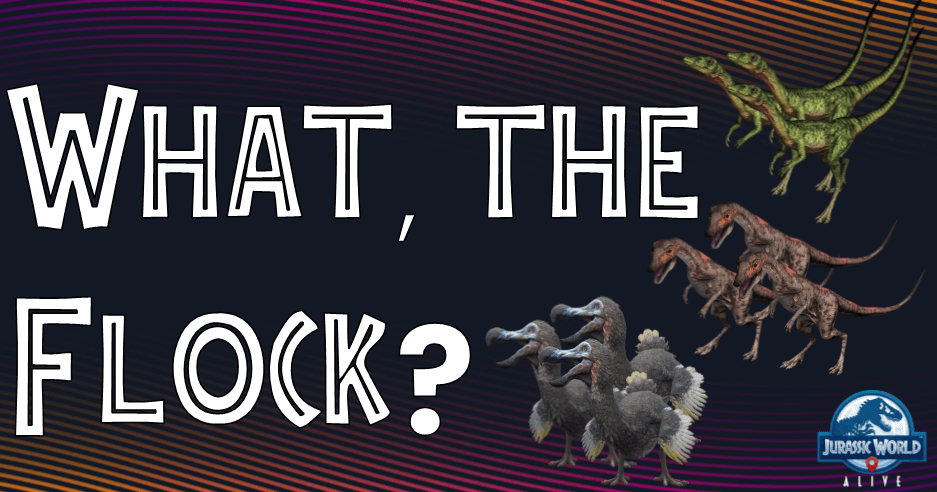 There has been a lot of questions and confusion over the new mechanic: Flocks. Battle experts IDGT and Practicekat are here to help break it down.

Compy are finally in the game and boy do these guys look cute!  Do not let these smaller creatures fool you, they pack a mean punch.  They come with brand-new game mechanics that look to be promising and will hopefully spice up the dullness in the arena.  Let’s examine these mechanics they bring to help better understand their uses.

At first glance, their stats don’t really stand out or seem like something one should get excited about.  But we assure you, this is not the case.  Each flock of creatures comes with new moves that will take all of us some time to get used to.  Their strongest power is a new passive called ABSORB.  Each flock comes with a set of three creatures.  Basically, their max HP is divided into a third which represents each individual flock member’s HP.  Now, the cool thing about absorb is that only one creature from the three will take damage from a NON-AOE (group) move.  For example, Mortem Rex vs. Compsocaulus (CompyC).  CompyC uses cunning strike to distract Mortem, Mortem uses cleansing Impact to remove the distraction.  This move normally causes 3,000 damage (at LVL 26, no boosts)- enough to kill almost the entire flock.  But only one flock member goes down.  Two are left at full HP.  This will make AOE (group) moves more effective during battle and bring some mind games back with strategy.  (No more “chomp and swap”). Swap In Strike moves from creatures like Ceramagnus and Monolorhino will also only hit one member of the flock, so swap in on them carefully. Be aware, however, that status effects will affect the entire flock. (DOT, Stuns, Distraction).  Each flock also has its own type/types of ALERT moves. Some are the same between non-hybrids and their hybrid. We will go over all of the specific creatures next.

Compsognathus and CompyC both have ALERT SCURRY.  This move has two different end results depending on HP remaining for the flock.  It is based on the number of flock members remaining.  So, if you have three on the field you are in a “Secure” state, and will attack as such.  On CompyC, this is a rampage.  If you are fielding two or less of the flock members, you are in a “Threatened” state.  You will perform an impact.  But!  one of your flock members will return!  Alert scurry in a threatened state will also heal 1/3 of total HP.  This is called a Rally Heal.

HOP AND MOCK is a move on all three Compy dinosaur flocks.  It feels somewhat like a raid move.  It can be used to remove a status effect from yourself (ie: bleed) or your opponent (ie: attack buff/shield/evasion) or to stall and avoid a counter-attack.

Compy2 is intriguing and has some powerful moves for a rare.  Its base attack, COURAGEOUS ALERT, has two forms: Secure and threatened.  In a secure state, it has a priority strike that is 100% chance to crit.  In a threatened state, this is still a priority strike, but the move changes to 50% chance to dodge 66.7% of damage (evasive strike).

Compy2 also has two passive moves that it shares with epic Compy- ALERT THE FLOCK and ALERT SWARM.  Alert the flock is a swap-in move that will bring one of your members back.  It is only activated with one flock member remaining in Threatened status.  It is also a dodge move with a 66.7% chance.

ALERT SWARM is the other passive.  It comes in the form of a “NO ESCAPE”.  Alert swarm is only active while you are in a secure state.  So once you drop to threatened (one flock member remaining) be ready for a swap-in to come.

Dodo and Dodocevia (DodoC) look to have some promising and fun moves.

They both have PROTECTIVE ALERT.  This is a non-damaging move but can prove useful in certain scenarios.  In the secure state, this move will cleanse as well as distract all opponents for 4 attacks/2 turns.  It also makes the opponent vulnerable for the same duration.  In a threatened state, this move will cleanse, distract all opponents for 4 attacks/2 turns, AND adds a rally heal.  So, we get another team member back.  This move could be useful to use while waiting for another to come off of a cool down or if the flock needs to survive longer.

Dodocevia has REVENGE DISTRACTING IMPACT, which is a rampage if used as a revenge move.

Both the hybrid and non-hybrid also have ALERT DECOY.  Alert Decoy has the potential to be very exciting.  It’s a risk vs. reward move.  It is quite powerful- packing a rampage move with 100% crit chance.  But you must sacrifice one of the flock to do it.  Now, there are restrictions.  If you are in a threatened state (only one member remaining) this ability is disabled.  Above it though- fair game!  Alert decoy is also an automatic swap.  (hit’n’run)  It is a risky move to sacrifice HP if an opponent times their priority shield or distraction.

We have been asking for ways for cunning to be relevant.  With most of the flocks being predominantly this class- it may be the answer we’ve been waiting for.  AOE creatures will become important for taking down the flocks.  Counter attackers will prove valuable as well.

All in all, the flocks and new mechanics they bring add some much-needed changes to the game.  Another aspect that will definitely change once these creatures are more prevalent in the arena is team composition.  This in time may indirectly buff a few of the “less popular” creatures (Poukandactylus for example), along with some of those already in use.  We are looking forward to what else Ludia has in store for the future...

As always, Good Luck Everyone.  Enjoy hunting the Flocks!