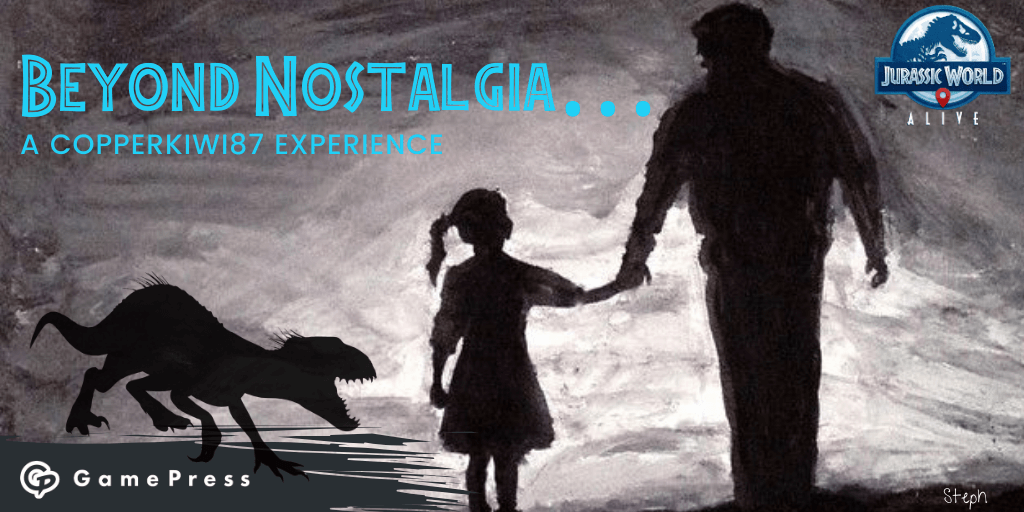 For those of you who don't know, I have been helping my daughter with her new JWA account ever since she lost her main one. It was hard for her... losing her team, her progress, and all the possibilities that were inherit to it. I also recently started a new JWA account myself, purposefully, to experience the game again. Needless to say that with all these new accounts, I started feeling a bit nostalgic.

Some of you may recall when strike events first came out, there was a level 30 Indoraptor strike. It was the subject of numerous review articles, YouTube videos, and debate on our Discord. Since this was in an era before boosts, even the veterans knew, that some strategy would be required to beat it. I personally reviewed the guide, watched the videos, and carefully calculated every step; how much damage I could do (with and without a crit), and how much damage I could take, factoring its insane 50% chance to dodge 100% damage. Just as well, there were no swap in monsters to help pull off a Hail Mary either.

I did manage to beat that strike, with a lucky crit through the evasion, and a sliver of health on my only dino left. I have a feeling that experience was close to what a lot of us went through at the time. Remember, this was before boosts, so a jumped up Thor (who also didn't exist) couldn't just waltz in and muscle its way through. No substitute for hard work, planning, and a "little" luck existed back then. I was so proud of myself as I think most of us were. What an accomplishment, after all.

Well, my daughter wanted to try it, and I always encouraged her to give it her all and accept what happens. At the time, her highest level creature was a level 12 Stegoceratops (who was no slouch back then). I mentally prepared myself for her reaction to the inevitable defeat. I mean, if players with level 22 Uniques were failing this strike, what hope did she have?

She walked up to the tree we were using for shade, sat down, and began. Mere moments later, she exclaimed "Daddy, I have it almost, but I took some damage!". I thought "Some damage? This thing chewed my team apart...How is she still alive, much less beating it?". Flash forward thirty seconds and she is opening her first epic strike incubator while I sat there, slack jawed at her accomplishment.

She had just defeated the level 30 Indoraptor Strike with a single level 8 Ornithimimus!!

All she did was spam Evasive Strike. THAT'S IT. I was a strange combination of proud, and outraged. I had spent quite some time coming up with an ideal battle plan, factoring in a whole slew of numbers, scribbling battle calculations on a piece of looseleaf laying around, researching videos, reading the Strike Guide...And she just waltzes in and spams Evasive Strike for the win?! Although I am convinced, to this day, that she was sacrificing small animals to the JWA RNG Gods that morning, the result was the same. We had both won… myself with a little bit of luck and a lot of strategy, and her, with just a sliver of a strategy and a Mt. Everest of luck.

But this article isn't a Strike Guide, it is a story. We all have our stories with this game. Ask any of the staff on our Discord, anyone who has been playing since the beginning, and even some of the new players who are beating Indo strikes with level 8 dinos about their stories… they will have some.  They are wasted keeping them to yourself and if nobody else wants to hear them – we do! I have heard of people who went to extreme lengths to reach a strike, or an elusive spawn, or RNG that was so extreme that people have rage-quit the game (and come back, of course), or conversely forced their opponent to rage-quit, in the middle of the match! SO many fun times in this game that we often forget, until we re-tell them.

Dont believe me? Just ask Jimbo about Stuns, or Ghast about Dodges, or Piere about Pierefuses, or Reeb about...well, anything but strategy!

Come Tell us YOUR stories on Discord by Clicking HERE!