A change that needs to happen: Balancing Ardentismaxima 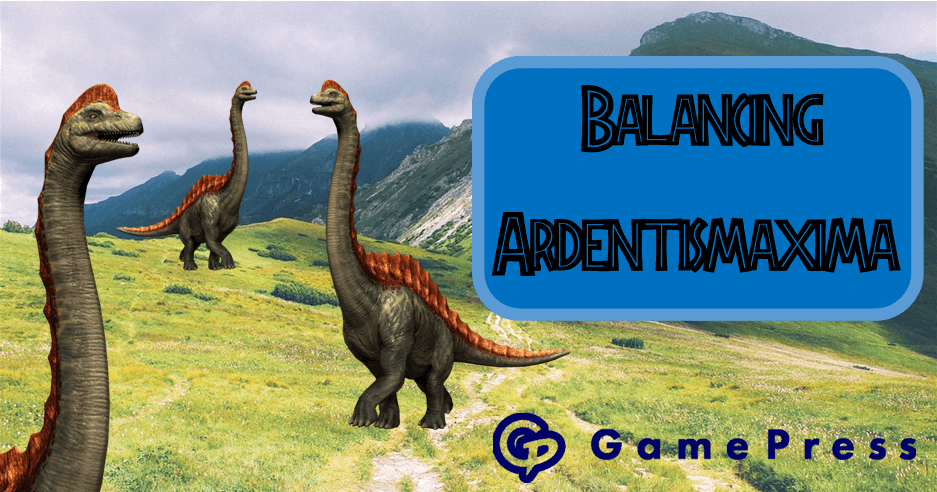 So the dust on Update 2.0 has finally settled a bit and lots of people including myself have been playing around with all the new creatures and all the changed creatures. Update 2.0’s biggest thing aside from Raids was the Creature Balancing, which annihilated the Immune meta and made sure that almost every creature was viable in some way. However, there are two creatures that might have had too much given to them, as they are quite literally wrecking the Arena for a lot of people. Those creatures, as you might have already partially guessed by the title of this article, are Ardentismaxima and Trykosaurus. These two creatures have been a pain for many teams to deal with purely because of the fact of how many creatures they can defeat without much effort. In this article, I will explore several options to make Ardentismaxima more in-line with the rest of the creatures in game, as this will cause way less frustration about it. Be sure to be on the lookout for a future Trykosaurus balancing article as well!

What makes Ardentismaxima so powerful?

In order to see what makes Ardentismaxima so powerful, it is important that you know the basics of what beats what in this new Update. So if you haven’t read Brian’s article about Fierce/Resilient/Cunning yet or don’t know the basics of those three types, I highly recommend reading this article first before continuing to read this one. 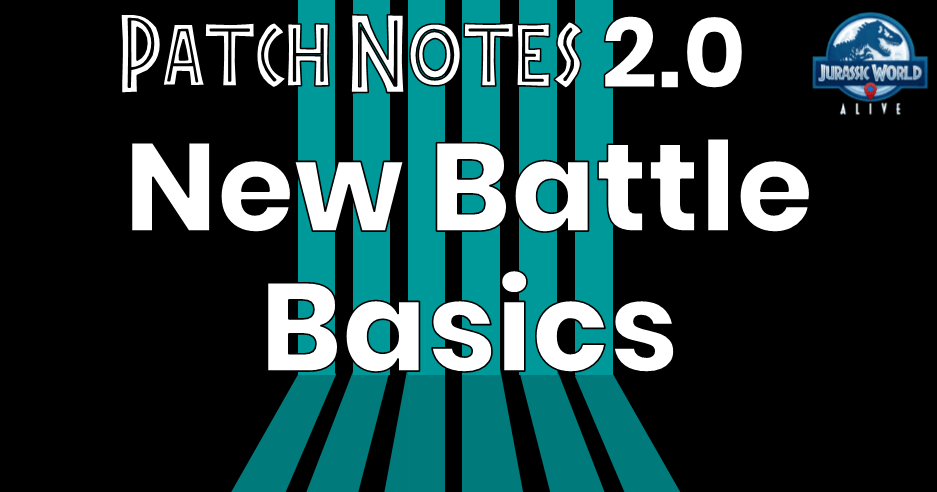 Ardentismaxima is designed to be a mixture of Fierce and Resilient creatures. As mentioned in Brians article, Fierce gets beaten by Cunning. However, since it is also a Resilient creature, it beats the Cunning creatures as well, as Resilient beats Cunning. So in that sense, the only thing left that can counter it is Fierce, as Fierce beats Resilient. However, Ardentismaxima possesses so much damage output that the only creatures that can counter it are Mortem Rex, which is locked behind Raids (good luck if you only get 10s every time, like me. Not nice waiting 28 weeks for it isn’t it?), Alloraptor (still risky for Ardentismaxima crits if not boosted enough), Thylacotator (best option) or Marsupial Lion. There are probably a couple more that can counter it but those are the ones I am certain of, let me know either in the comments below or in Discord if I forgot any. Damage over Time will check it, but most Bleeders get taken out by Ardentismaxima.

The whole reason for a balancing is to not have to run a couple of creatures to beat one main threat, which ultimately did happen with Ardentismaxima. So with the basics of it being too powerful being covered, let’s go over some options to balance it. 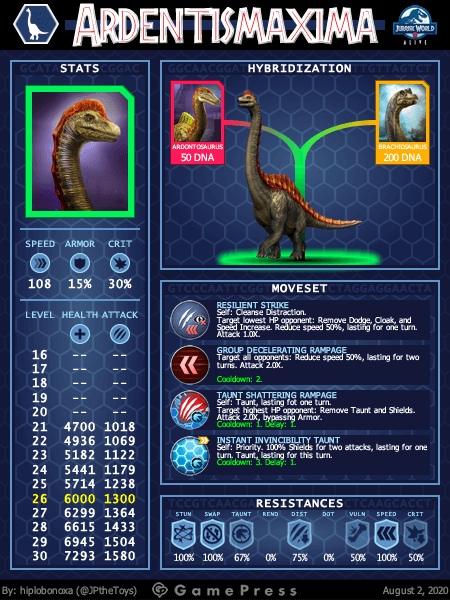 If we want to keep the Health stat, I would suggest an Attack drop to 1000. Since I can already hear the outrage people might have, hear me out on this one. While this is the same Attack stat as Brachiosaurus and Ardontosaurus has 1500 Attack so 1300 seems like a good medium, Ardontosaurus has threequarters the Health stat of Ardentismaxima, as well as having no Armor, allowing it to be dispatched much more easily. With Ardentismaxima, it has 6000 Health and 15% Armor. The thing that irked me the most about the Immune Meta (I’ll link the Op Ed if you haven’t read it already) was that some creatures have had both tankiness (either by high Health, lots of Armor or a combination) as well as massive damage output. Ludia went and fixed this for most creatures. But not this one. So if Ardentismaxima wants to keep its big Health pool, the Attack Stat NEEDS to drop in order for it to be balanced. The opposite is also true, if Ardentismaxima wants to keep its Attack stat, the Health Stat NEEDS to drop for it to be balanced.

Op Ed: The Immune Meta is a Mess

The third thing I want to chat about is the Critical Hit Chance. This comes from its Brachiosaurus ancestor as well as Ardontosaurus having 20% Critical Hit Chance. Everyone despises RNG, especially when it comes to Critical Hits, as they can ruin entire games if you get unlucky. And with such a bulky and offensive creature such as Ardentismaxima, it makes them even more painful, as it will have an easier time destroying all your creatures. In my personal opinion, I think it should not have that 30% Critical Hit Chance, but seeing as all its components have at least a 20% Critical Chance, it should at least have the 20%. This still isn’t perfect, but that 10% reduction should be enough to at least lower the chance of it ruining your dreams.

To be honest, the other Stats don’t bother me as much. 15% Armor is okay for the role it has as a Resilient creature, so I don’t see that much problems with that. The 108 Speed can be a bit iffy, seeing as it does allow it to outspeed other chompers such as Allosinosaurus and Thoradolosaur, but seeing as it will outspeed most of them with its Decelerating moves, that won’t be such a big deal regardless. The things that are Immune to Deceleration and that should be countering it are all faster than it, such as Mortem Rex.

The second big thing about Ardentismaxima is its phenomenal Moveset. Having access to arguably the best Basic attack Resilient Strike as well as two Rampages in Group Decelerating Rampage as well as Taunt Shattering Rampage is already good, but then we get to the biggest problem: Instant Invincibility Taunt. This is the worst part of Ardentismaxima’s moveset, as because of Maxima’s low Speed, this move will most likely Shield Ardentismaxima for TWO attacks rather than one attack due to the way Turns work in JWA.

As Instant Invincibility Taunt is a Priority move, it will almost always act before any other attack, making sure that you are Shielded for at least one attack. But here’s the big thing. If the opponent is faster than Ardentismaxima, it will use a second attack before Ardentismaxima can move to start another ‘Turn’ for it. This way, the Invincibility will stay up for another attack from the opponent. In all Updates before 2.0, Instant Invincibility only blocked one Attack. But now in 2.0, it stays up for an entire ‘Turn’, and with the way ‘Turns’ are made this causes Ardentismaxima to frequently block two attacks rather than 1, like it was in the previous Updates. I hope that this explained a bit more on what a ‘Turn’ is and why the Instant Invincibility blocks two attacks rather than 1. And now, back to the regularly scheduled program.

NOTE: Apparently Instant Invincibility Taunt by time of this article's release is broken and does not block any attacks. We presume this is a mistake by Ludia while they were attempting to 'fix' it.

This change is what pissed people off the most, and while it does sound busted, it does exactly what it needs to do. This move is just used on a slow dinosaur which will make it more powerful than if it was used on a faster creature. Due to this Instant Invincibility will most likely block two attacks. This needs to be reworked. Other Invincibility moves such as Group Invincibility (Geminititan has this one) all block for one ATTACK, and that is how Instant Invincibility should be tweaked.

With the Invincibility ‘problem’ fixed, now we can look towards the other moves Ardentismaxima has. To start it has Group Decelerating Rampage, a Rampage move available to it on Turn 1. While I’m not the biggest fan of having a Rampage move with a special effect I think this move should be able to stay on Ardentismaxima. It fits it Resilient role well and this is its main move in Raids. Taunt Shattering Rampage however is where I have a problem. With Fierce and Resilient’s combination being able to shut down every type of Defense and Ardentismaxima’s 75% Distraction Resistance there is little that any creature can do in order to stop its assault when this move shatters Defenses and pierces Armor. To keep its Fierce aspect I suggest that we change some things up in its moveset.

With this change Ardentismaxima focuses more to be a Resilient creature while also having access to Shield Breaking in its Basic attack. This way it is capable of dealing with Shields, but it needs to sacrifice damage output in order to break them. Ardentismaxima will still be able to deal quite a lot of damage as well, with it still having access to Decelerating Rampage and Resilient Impact, but now it won’t be able to shatter Defenses while also dealing big damage at the same time. This also pairs greatly with how Ardentismaxima has more Resilient components rather than Fierce and it now creates a choice for people: Do I want the more offensive Sauropod Ardontosaurus with more Fierce damage output, or choose the tankier, more Resilient focused Ardentismaxima?

So with all these options covered, how would I personally make Ardentismaxima a more balanced creature? I think that I would focus Ardentismaxima to be more of a Resilient focused creature, with some small Fierce aspects applied to it. I would remove the Distraction Resistance, change up the moveset as mentioned above, and change the stats like this:

Oooh boy this was a long article. But I do think that I presented some very justified and reasonable changes that could be made to Ardentismaxima in order to make it more balanced. It still is nowhere near the range where it will be unusable, but it also isn’t beating everything. What do you think of the changes that I made to Ardentismaxima? Share it with me in our Discord server! I would love to see what you think of them or discuss other possibilities to balance Ardentismaxima! Also let me know what you think of these types of articles. If they are popular and people like them, I might write some more of them! Be sure to be on the lookout for a rework of Trykosaurus next time! Until next time Explorers!