There’s a lot going on in the world of Jurassic World Alive and we wanted to do a quick wrap-up on all the news in Jurassic World Alive. If you’re unfamiliar with the game, Jurassic World Alive is a geolocation based game like Pokemon Go – only featuring creatures from the Jurassic Park universe. Be sure to check out our beginners guides if you’re brand new to the game and download it on the Apple App Store or Google Play Store.

First up, we’ve got a new scent in the store today that you can pick up. This is a hardosaurae scent, so if you’re desperate for Edmontosaurus, Tenontosaurus, Iguanadon and the like, you can pick up a bunch of them in this scent. Remember, these scents work like the blue scents – which means they have a higher than average (around 20-30%) chance of getting you rare creatures and there’s at least one rare creature guaranteed. The full list of possible creatures can be found in the image below: 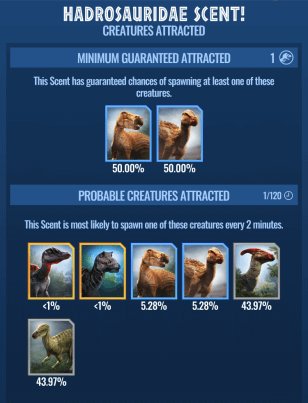 As promised, Ludia will be rotating seasonal matches each month – tracking your highest trophy count and rewarding people with desirable Epic DNA based on the highest rank achieved in the season. To participate in a season, all you need to do is battle once in the month of August. That’s it. You’re automatically entered and you will get the possibility for some cool rewards.

If you battled in July, you can collect your Pyroraptor DNA for hitting a tier by hitting battle again. You’ll see a pop up with your pyroraptor reward DNA. You can collect this reward anytime between now and the start of the next tournament but basically you can’t battle until you collect.

August will be featuring Ankylosaurus DNA, which is much appreciated. We’re still holding out for Diplodocus, but we’ll take Anky for now!

Check out the reward tiers below:

700 gold per chest for 15 minutes if in close range. 175 gold per chest if not in range. (Those limits at player level 20) Chests pop every 15 minutes and seem to be everywhere. Once you open a chest, the remaining chests around you disappear. 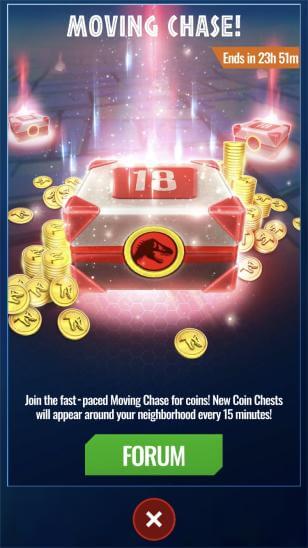 On the forums, Ludia mentioned how this would allow people to collect over a million coins in a month, and overall more coins are indeed appreciated. Can’t complain about changes that make the game better and easier for free to play players. And this certainly does help.

Edited as of 11:23 PM – For the first hour or two it appears chests were not disappearing after one was opened and players were able to collect more than one chest in a 15 minute cycle. It appears this has since changed and now chests only allow one open per 15 minutes (and the rest disappear).

While the pain points with matchmaking, arena luck (RNG), and boosts remain, it’s good to continue to see new creative things in the works and we’re hopeful the major issues get addressed soon. We hope more good things are in the works that make the game easier, more fun, and less painful in the arena. Make sure to join our Discord for more discussion and up to date information!