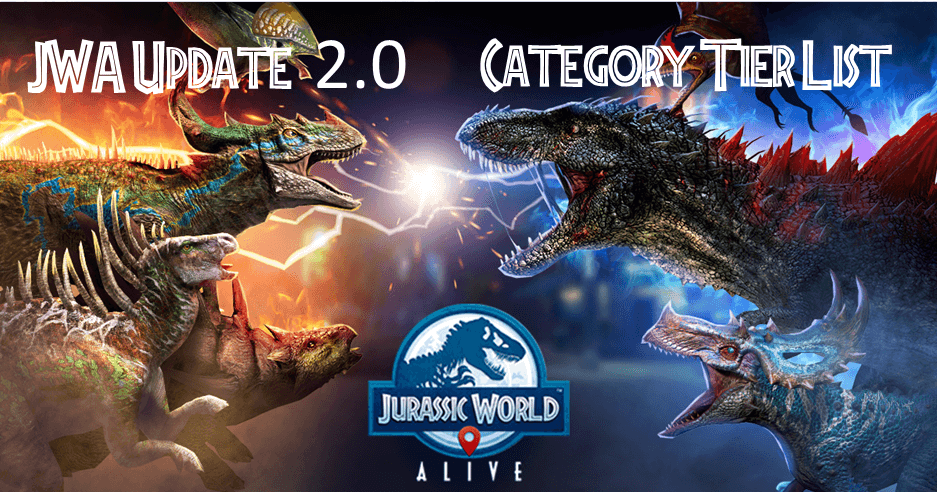 Explorers! The question we get asked the most on our Discord server is: Where is the Tier List? Trust me, we get that question daily at least a couple of times. Unfortunately, the big Tier List is still being made as you read this article. However, as some sort of teaser to the big list, we have produced different Tier Lists for several categories! These will work a bit differently than the big Tier List, but they took a while to create nonetheless. I do want to say: These smaller Tier Lists do not replace the big Tier List, we are still working on this, just to mention that again.

With the introduction of Mortem Rex and the stolen name Apex Rarity, we had to change the name of the Apex Tier. Shame on Ludia for stealing our terms! So we have made a new name for the formerly called Apex Tier: Elite. We felt that this name fit the Tier well, as it isn't quite Tyrant class, but definitely one of the best ranks you can get.

We also want to take the time to credit some people who wrote some pieces for each Tier List. With all images goes a small piece of text that has been written by the leaders of the team responsible for bringing you that list. So in that regard, I would like to thank greenlantern68 (Wild Card), jimbohi (Raid), MaleficEthan (Cunning) and Prominence (Fierce) for writing the pieces for their respective Tier List. We also want to thank Heather for writing a quick piece on how we determined which creatures turned up where.

Finally, we want to give a massive thank you to our Artist Hiplobonoxa for making the Tier List images for us! So, let's not stall any further and dive into these Tier Lists!

Explaining the Categories and how we placed creatures

When Update 2.0 came out, we of course trembled at the thought of creating the big Tier List. Giving all 200+ creatures a new placement isn't easy! However, Ludia's new creature descriptions gave us an idea. Ludia ranked all creatures in certain categories: Cunning, Resilient, Fierce and Wild Card. We thought: why not rank all these creatures in their respective categories first? That way we have a good insight on how good all creatures are in the role Ludia gave them. This would help us to create the big Tier List as well, as we could see where they would be on the power scale. However, with Raids being added to the game, we had to create a Raids Tier List as well. This took some effort from some of the best Raiders in the game together, but we managed to make one.

So now you may ask: how did we place all these creatures in the respective categories? Some are quite simple: You will see creatures that have access to Cunning/Fierce/Resilient moves being placed in their respective categories. However, not all choices were very easy. We made the decision to put Bleeders in the Fierce category, under thought that they were designed to defeat Resilient creatures. You may have your own thoughts on this, but we felt that this felt appropriate.

Any creature with a 'Group' move such as Group Decelerating Rampage was placed in the Raids category, but we didn't stop there. Through careful selection we have brought you all the creatures that we feel belong in the Raids Tier List.

Finally, there are the Wild Cards. These creatures are not of any one specific category, this is a list of creatures who are either a jack of all trades or excel in more than one area of expertise!

Names of the people who worked on them, as well as a brief explanation on how these Lists were made. This will hopefully give you an insight on how all these Tier Lists were made and to hopefully make it easier to see why we put which creature where. Now, without further ado: Here are the Tier Lists!

Hey explorers! Prominence reporting. I was working with the amazing team that developed the Fierce creatures tier list so I thought I’d give you a peak into how we decided where to place things. We started by considering how each Fierce type creature faired against what they were meant to counter (typically resilient type creatures) using their entire set. Ardentismaxima and Trykosaurus top our list even though they have qualities other than Fierce, because their entire set makes them very strong against Resilient type creatures. Alloraptor and Thylacotator are also very specialized tank busters, so we figured they should also be at the top of the list. For the most part we organized the list by vote, and when a creature was in contention we had a quick debate from both sides to try to sway the argument. Tier 1 creatures are the meta-defining creatures most people will be using as their Fierce type creatures, tier 2 creatures are still quite strong but won’t be most people’s first choice, tier 3 creatures may have a chance to shine in rarity limited tournaments but won’t end up on many arena teams, and tier 4 creatures are typically not going to end up on many teams at all. Its probably not perfect, but we worked hard together as a team to make this tier list reflect how we feel Fierce creatures handle themselves in ideal conditions. 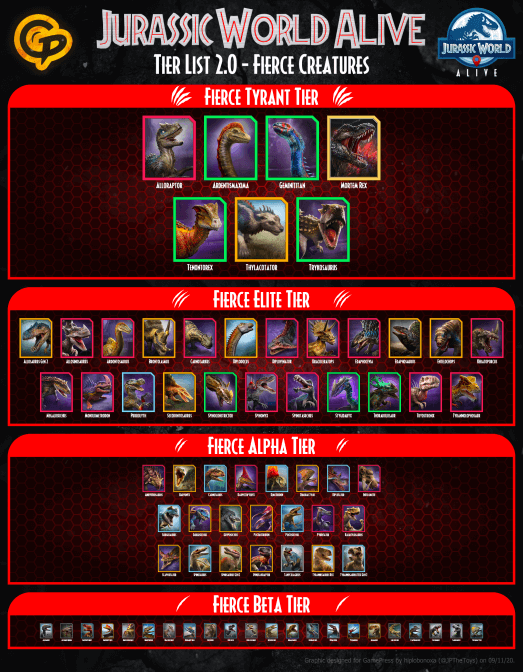 In the Cunning Tier List, we ranked each creature on whether they effectively countered Fierce creatures, their class they are designed to counter, and also how well rounded of a dinosaur they are. For example, we placed Utasinoraptor in Elite even though it does a great job against Fierce Creatures, but it falls flat against other Cunning and Resilient Creatures. Then for example Phorusaura was placed in Tyrant because it counters Fierce Creatures efficiently, and is a very well rounded Creature. This was a long and arduous process, but we are happy the way it turned out! 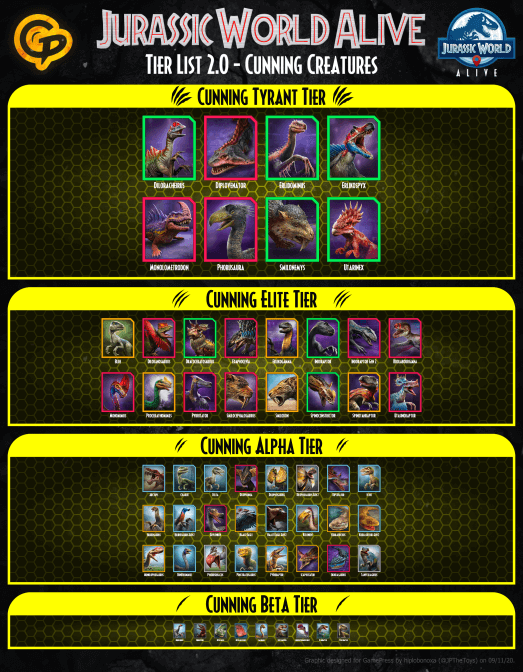 For the Resilient Tier List, we decided to do a vote on how the creature performed overall. Not just at how good it was at being Resilient, but also at its performance in general against all types of creatures. This will cause creatures such as Ardontosaurus, who doesn't have much Resilient aspects to it, to still be placed very high, while other Resilient creatures such as Mammolania were also placed very high due to how amazing it is at being a Resilient creature. Multiple aspects like this determined the placements of each creature and after that we all went and discussed the placements of creatures we couldn't agree on. But in the end it resulted in an amazing Tier List that we all agreed on. 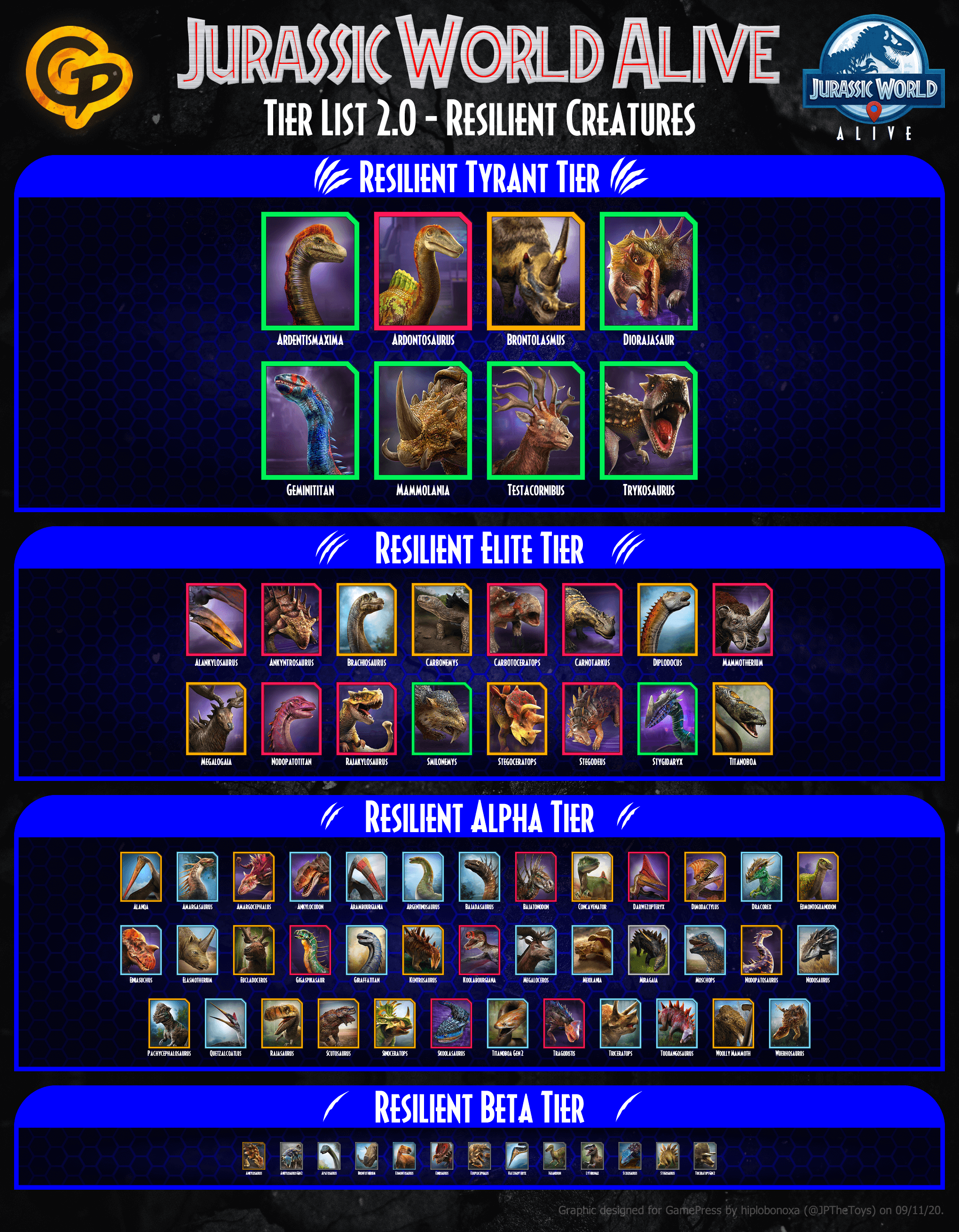 Creatures in the ‘Wild Card’ category have the ability to handle multiple types of opponents and cannot be strictly confined to the Cunning, Fierce, or Resilient categories.  Wild Cards were compared against each other for ranking and placed in Tyrant, Elite, Alpha and Beta classes.  Tyrant Wild Cards stand out as having diverse toolkits that allow them to excel in battle.  Whether it’s bleeding, a Swap-in Strike or Deceleration; these Tyrants stood out above all others as having what it takes to be the last dinosaur standing.  Next, the Elite group were superior creatures that were lacking something, such as lower health or attack, that held them back from being dominant Tyrants.  Then you have the Alpha class, not good enough for Elite status, but still having something that would make them a cut above the bottom of the barrel Beta group. 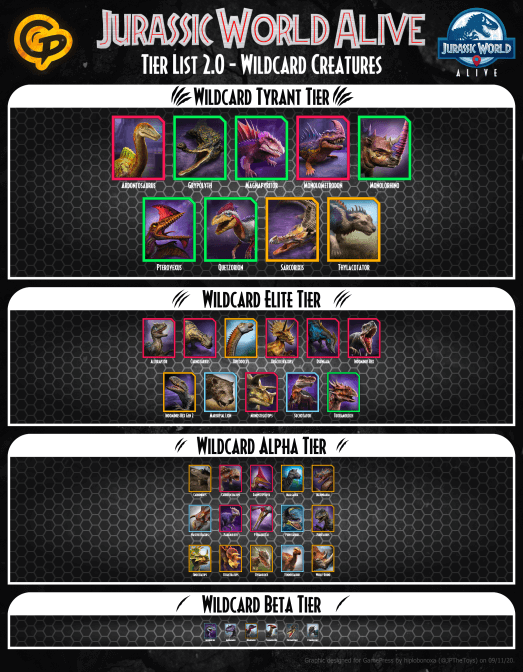 This list worked very different than the other Tier Lists and completly different to the big Tier List so to help better understand here is a brief explination,

For starters we couldn't use the normal set level of 26, mainly because Raids don't abide by that rule so we couldn't either. Raids have different Rarities and different Levels so we had to consider that.

We decided early on that it was going to be a tough list to make as what could be Tyrant in one Raid woud either be not allowed or unusable in another. As such we decided to look at the bigger picture and take as much into account as we could whilst considering what the average player could/couldn't use and what they would have access to.

So we very loosely went along the lines of what are the creatures stats and moves? How many Raids can it compete in? Does it need to be overlevelled? And is it easy enough to do without hindering progress on a better dino?  Does it need Boosts? Can it be paired with multiple different teams and still compete? Will it help in other aspects (Arena & Strikes) then we put all this together to work out how important it was to a Raid then we placed it from there,

This obviously meant things like Tuoramoloch that can only be used in 2 Raids but shines exceptionally well in 1. It didn't fit all the boxes but was so vital to the one it did it had to become a Tyrant. On the other side Indoraptor G2 and Irritator shine in multiple areas but they are very easily replaceable so not quite top tier.

Hopefully this gives a small insight into how we went about placing things for the Raid Tier List.

As a disclaimer: This discussion did not take into account the datamined Raids for Grypolyth, Pyrritator and Tyrannosaurus Rex. We don't know anything about then yet and it is almost impossible to predict what creatures will do well due to the altered moves these Raid Bosses have. 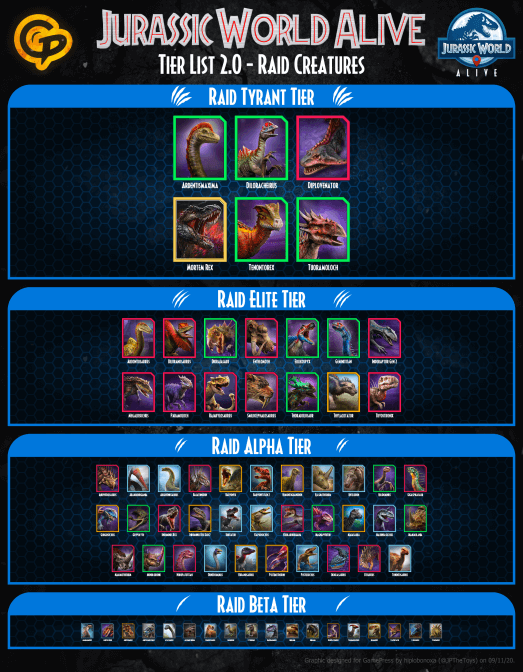 Once the Tier Lists were finalised, the entire group alongside a couple other people that weren't able to participate beforehand went over the Tier Lists and made some final changes. The people who weren't listed before but did help in these discussions are Castal, CopperKiwi87 and DadJokes.

Our Tier List Coördinators this time have done an amazing job at making sure the Tier List Discussions moved on and stayed on track. As such we would give a heartfelt thanks to Heather and MaleficEthan for taking up this role! Together with Dr. Reebecca you made sure these lists were made in a proper manner without letting the debates getting (too) heated.

Finally, we want to once again put out a thank you to our Artist Hiplobonoxa for creating these amazing Tier List Images.

Below is our code for this week. It will be active until Sunday, September 13nd at 12 PM EDT.

And there they are. The Tier Lists you have all been waiting for. We hope these will suffice until we release our big Tier List, which we hope to release before the next Update comes around ;). If you have some things to say on our Tier Lists, be sure to hop over to our Discord, where you can come into contact with the people that created these lists and can start discussions with them! This took a great amount of time, but do remember that we had to start from scratch with 200+ creatures. That takes some time. Until next time Explorers!