JWA: Creatures used by the Top 50! 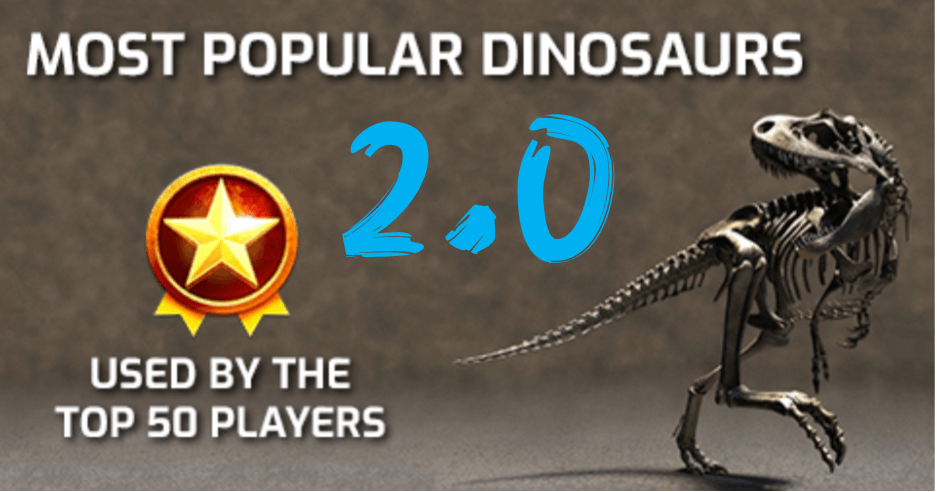 Explorers! It’s that time again where we collect all the data from the Top 50 and see what creatures they use! But this time we have done it with a little twist – be sure to read on to find out what! As usual we want to thank KillerT for collecting the data on the creatures, but we also want to thank our Artist Hiplobonoxa on adding to this information. Without further ado, let’s dive right in.

So as I mentioned before we have done a little twist with the data collecting this time. We still have the list of all the creatures that are used, but our Artist Hiplobonoxa went one step further and calculated the average boost counts for each creature that has been used more than 4 times! In the image he made he shows the creatures that are used most as well as their average Boost spreads! Do keep in mind that while it should be 30 boosts all around, there might be some rounding errors involved. 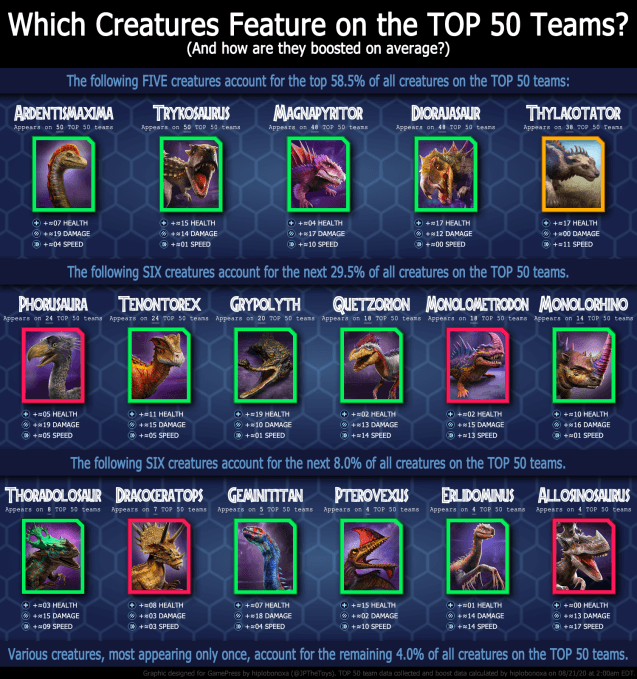 And if you want to know the entire list of creatures you can find it right here!

Creature Changes in a Week

So we had our Discord member KillerT send in data about a week earlier than when Hiplobonoxa collected data on the Top 50, so this allowed us to create quite the interesting graph on how the Top 50’s creatures have changed in a week. Here is how it got changed. We only used the top 18 creatures by Hiplobonoxa. 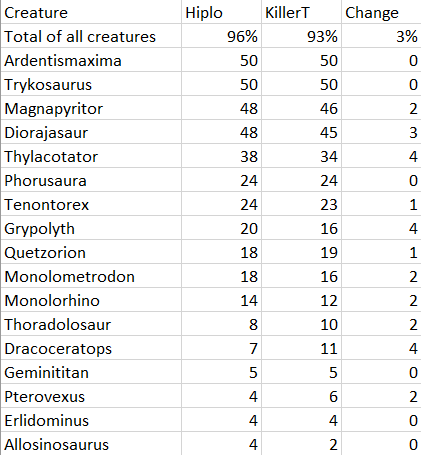 It’s interesting that some creatures drop more than others, while others gain popularity. For example, Diorajasaur, Grypolyth and Thylacotator gained usage based on their ability to either Tank or deal with Tanks, while creatures such as Dracoceratops lost some, presumably because he got overshadowed by Monolorhino as a better Swap in creature. It is quite interesting to see how the Top 50 adapts to the people around them, as they really do have a meta on their own that changes quickly.

For all the big number crunchers among us, you are going to love this next graphic. It shows not only how much each creature is used, but also percentages of how much they are used, as percentages of all creatures and most importantly: how much boosts these creatures generally have and how they are spread out! Once again a massive shoutout to Hiplobonoxa for providing us with these statistics! 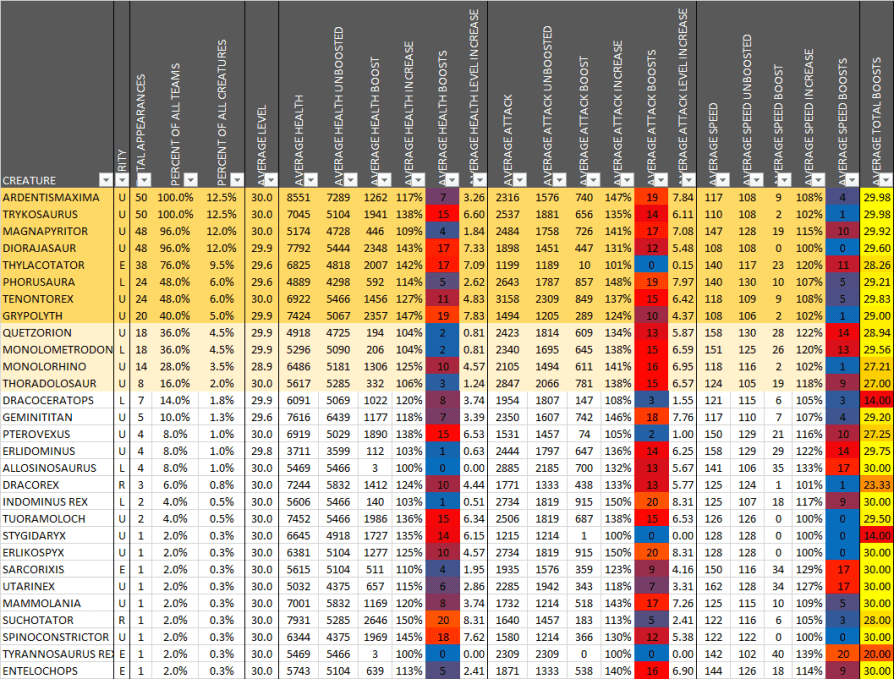 Of course the biggest question you have is: ‘Why do these people use these creatures?’ And that’s a very good question, which we will try to answer with a quick overview of some of the standouts. Some creatures such as Trykosaurus, Ardentismaxima, Magnapyritor and Diorajasaur are simpler to explain, as they almost rule the metagame right now, but there are some interesting numbers in this list, and we will try to explain why they are picked!

The fifth most used creature is the Epic Superhybrid Thylacotator. An Epic as the fifth most used creature might surprise some of you, but Thylacotator is one of the absolute best creatures at taking out some very prominent threats: Ardentismaxima, Trykosaurus, Diorajasaur and Geminititan. And the benefit is that it doesn’t have to invest in Attack at all, so it can go easy bulk and speed to survive all hits thrown at it! This Epic is definitely one to keep on your team when you unlock it!

With three out of the five creatures being Resilient, you might be surprised to see that Phorusaura is being used by almost half of the Top 50. But if you take a closer look you’ll see that it actually is a real force to be reckoned with. Instant Rampage gives it the tool to be one of the best revengekillers in the game, and Rampage and Run give it ample damage while escaping a tricky situation as well! Pair that with Monolorhino, Dracoceratops, Quetzorion or Pterovexus and you will have a very dangerous situation!

This creature went from being the most powerful in the game to only used by 5 of the Top 50. But don’t be fooled – this creature is still a powerhouse. Group Decel Rampage and Definite Shield Advantage still pack a punch together, but you need to be more careful when using it due to the Delays and Cooldowns. Group Invincibility is also less powerful than Instant Invincibility Taunt, as it doesn’t stay up for the entire Turn, but it just blocks one Attack. Still: 5400 Health, a great set of Resistances and an amazing Attacking kit makes Geminititan one of the most feared Resilient creatures to come out, especially late game when its counters are gone.

This one even surprised me when I saw it, because how often do you see a Rare Non Hybrid being used in the upper Arenas? Almost never. However Dracorex has a pretty good Resilient Kit that allows it to take out Cunning creatures with relative ease, especially with its Swap-in Resilient Strike coming off its 1100 Attack. Instant Charge also gives it nice priority damage for when it gets slowed or needs to stall a turn of Lockdown. As a Rare, it can battle with the big boys and it has been used 3 times in the Top 50, showing how you don't necessarily need to have a team with all these fancy Epic, Legendary and Unique creatures to do well.

Ever since the Update dropped people immediately thought Thoradolosaur was gutted and Allosinosaurus would now be better than it. However, Thor actually gets used almost twice as much as Allosinosaurus is right now! We think that this is due to the fact that Thoradolosaur has two Defense Shattering Impacts, but another very important thing it has is a 100% Resistance to Swap Prevention. This allows it to get out against creatures such as Pterovexus and Grypolyth if it is about to lose, something Allosinosaurus cannot do. However, don’t be fooled – Allosinosaurus packs a bigger punch than Thoradolosaur, is faster and bulkier – but it has no Resistances and it can be blocked by Shields for one turn if you predict right. Still, it would seem that both Thor and Allosino are both well used in the Arena to shred those pesky Resilient creatures, and they will do the same for you!

Finally we have Dracoceratops, a creature that received a Superhybrid this patch. Why does this Legendary get used more than its Unique? The answer is very simple: better Stats and better movepool. Dracoceratops is much bulkier compared to Dracoceratosaurus, with a 4200 Health stat compared to the 3300 its hybrid has. And even though Dracoceratosaurus has 1600 Attack, it is just 100 more than its Legendary component. Add Dracoceratops’ ability to Shatter Shields with Fierce Strike and Impact and you have a very powerful Swap-In creature that can hold its own after it has swapped in too!

Those are the creatures that are used by the Top 50! Of course these numbers might have already changed by the time this article goes live, but you need to remember that this data is pulled from one moment, not from a period of time. Were there any surprises? Let us know in the comments or on our Discord server! We hope to see you on there!

Don't forget to click on the button below for some in-game Cash as well! This link is active until Sunday noon EDT. It can only be claimed once and via a mobile device. Promotional code provided courtesy of Ludia Inc.

Click this button to claim your in-game reward!Join our Discord!