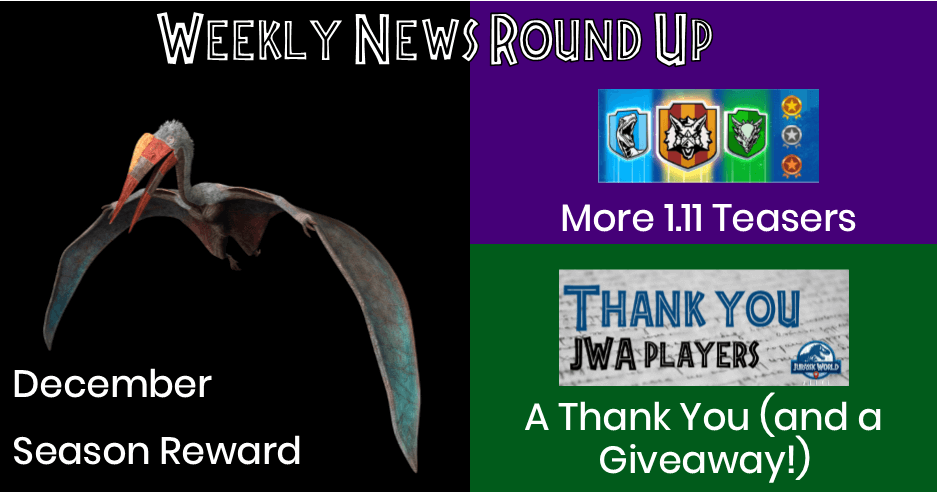 Welcome back, Explorers! We were really hoping for another teaser or even patch notes this week, but all is quiet on the Ludia front (and that usually means they are up to something). The thanksgiving events have been awesome so far with the chance to dart a unique yesterday and a chance to dart a legendary dino tomorrow. We are also loving all the extra rewards in the chests and supply drops (especially the sanctuary items!). It's been a pretty quiet week in terms of news, but we did see another teaser that suspiciously disappeared recently, the December season rewards have been announced, and we say thank you to our players with a chance to win some gift cards! So let's get to it.

After the tweet that confirmed that we will get birds in sanctuaries in 1.11, we were all aboard the hype train. Usually we see about 3-4 teasers before we get patch notes so we were anxiously anticipating another one this week, and Ludia delievered.....kind of.

On November 23rd we got what we though was the 2nd teaser: 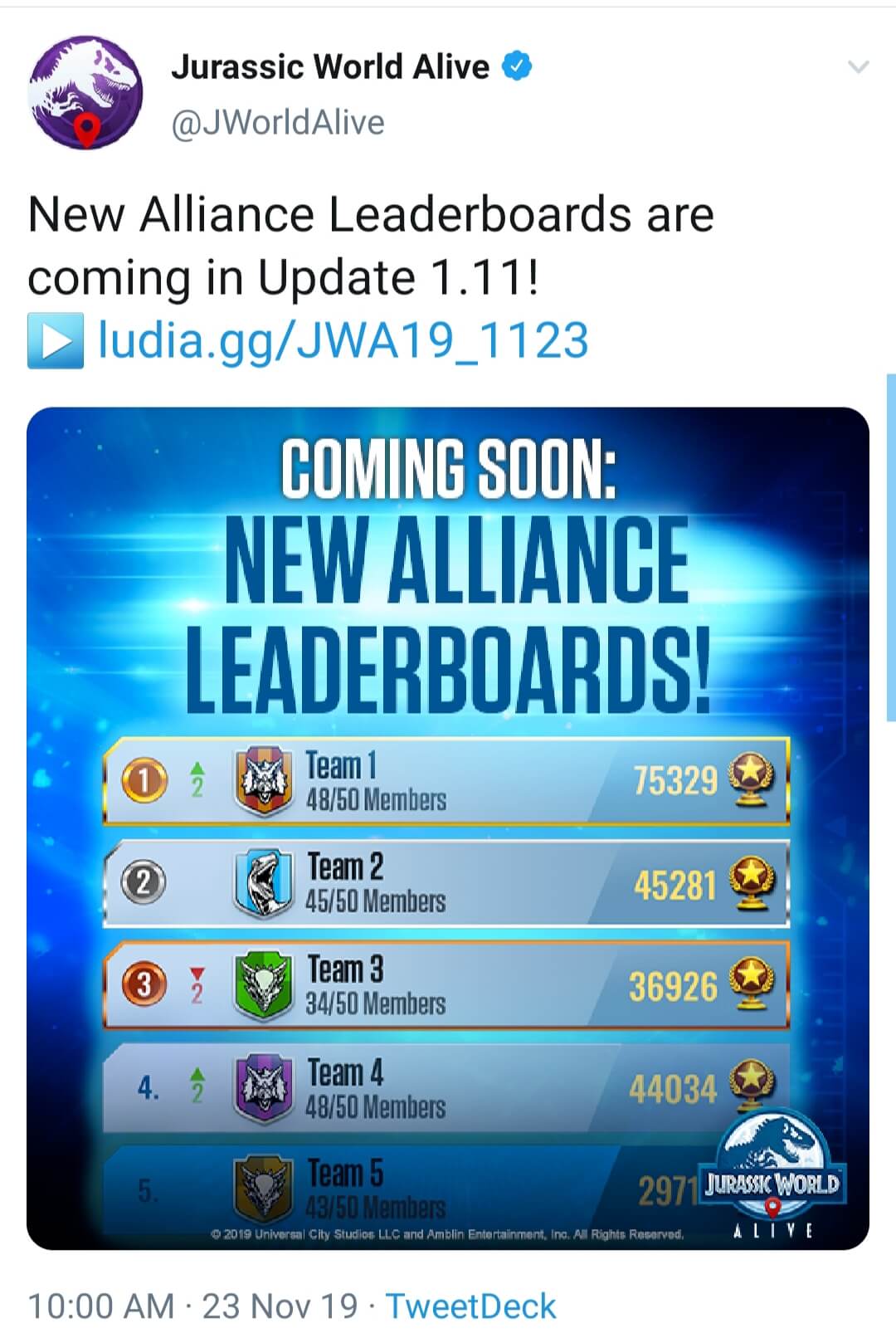 This was pretty exciting news and once again everyone was talking about it. There weren't any more details about it so we didn't know if the alliance leaderboard would be trophy based or mission based or how the scores would be calculated. People had some opinions about it and once again the forums and our discord were full of discussion.

That tweet, however, has mysteriously been deleted and is no longer showing on the official twitter account. And we aren't sure what to think about that. Is this feature going to be available in 1.11 or did they scrap the idea all together?!

Then today we got another teaser!!

Looking at the image and after talking with those on our discord we think that is a Mammoth, a deer, and a wooly rhino. Really exciting stuff!  We're hoping to see one more teaser next wee (hopefully about hybrids!) and then maybe patch notes next week?! Whatever the case, we'll be sure to keep you updated on everything!

As the November Alanqa season comes to a close on Monday, there has been a lot of talk about what the next season's rewards will be and that was officially announced yesterday on the forum and it will be Arambourgiania.

Here are the breakdown of prizes: 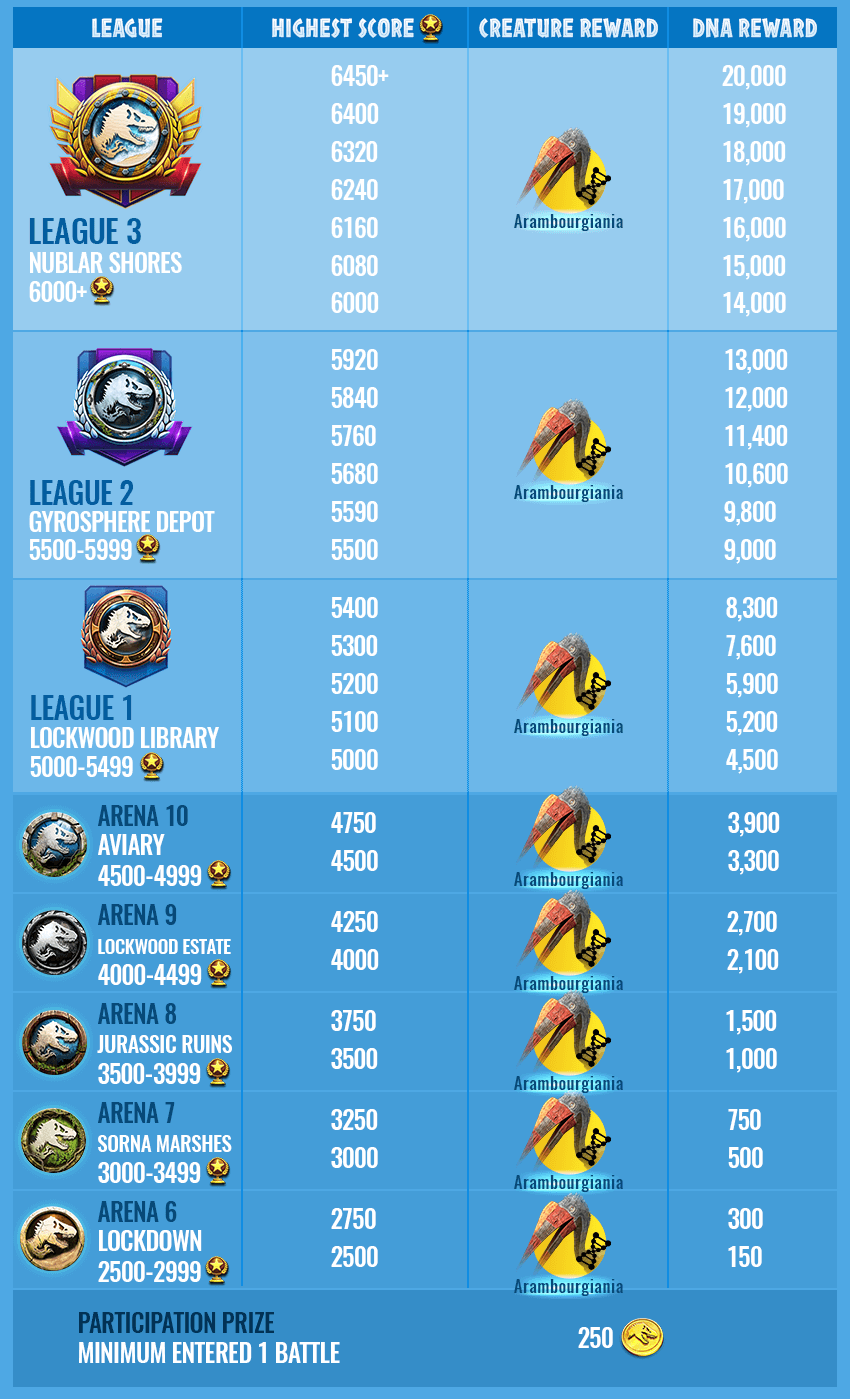 We are pretty excited about this prize as this is an arena exclusive dino that is a component of the Tyrant hybrid, Geminititan. Based on the rewards we have had so far it looks like the seasons will feature the arena exclusive dinos from each arena. The last 3 rewards were the exclusive creatures for Fallen Kingdom and this one is from Mt.Sibo.

We are hoping to see some Diplod featured in events the next month as well so we can start stocking up on the other component of Gem so we are ready to fuse once we get our rewards.

Thank You and a Giveaway!

In the spirit of the holiday season, we wanted to take a moment and thank our readers because we wouldn't be here without you. To express our appreciation of you we are doing a giveaway for a chance to win a $25 Google Play or Apple iTunes gift card. Check out the article below for the whole thank you letter and the links to sign up for the giveaway. 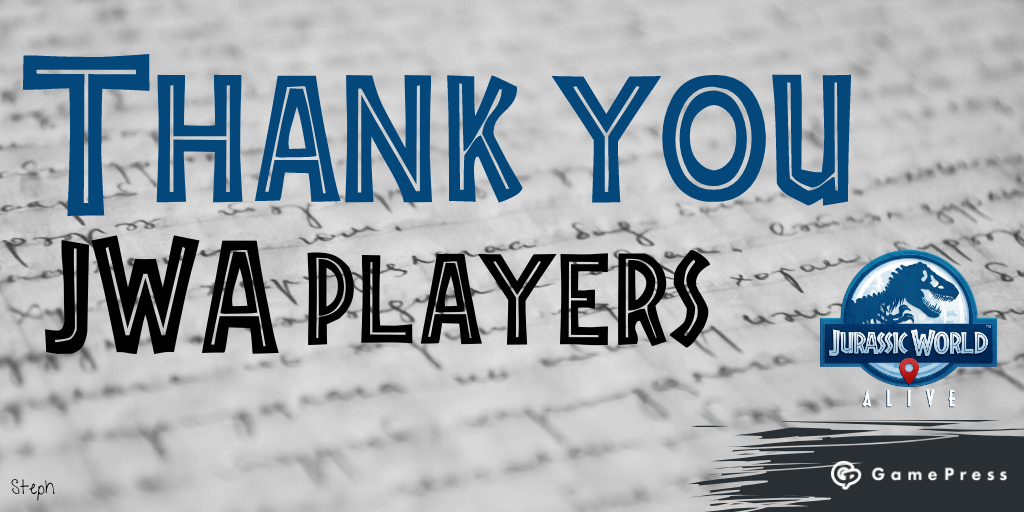 We've had another exciting week and will make sure to update you on Sunday as soon as next week's event dinos are announced. Hopefully, we'll get more teasers for 1.11 next week and we are especially excited to see what new dinos and hybrids we might be getting! As always, make sure to follow us on Twitter and Facebook where we will keep you up to date with information, and join our discussion on discord. We will be all aboard the hype train once we know when those patch notes will actually be released!