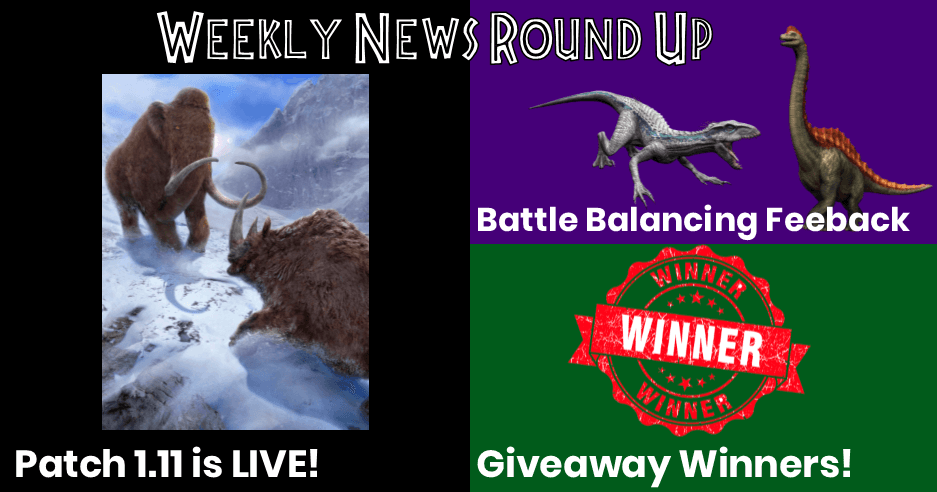 Explorers! It has been an exciting week! After we got surprise notes last Friday, Patch 1.11 officially went live on Tuesday. We have been busy all week digging into the code and keeping you up to date on the new patch. There is also an epic skills tournament that started today. Make sure to check out our article below on what creatures you should be using (hint: Mammoth is a must!). Also this week, there was an Alliance Reward Update, more Battle Balancing Information, and we announce Winners of our Thanksgiving Giveaway! So let's get to it!

Epic Regular Skills Tournament: Best Dinos based on the Sim

Patch 1.11 went live on Tuesday and we have been pretty impressed with it so far! After going through the code we found some interesting things so you should definitely check out our article below on it. We were also able to get a look at the spawn mechanics. It looks like the new Bajadasaurus was added to the parks and there were some changes to nests, but there weren't any changes to the local spawns.

Mammoth is out as a global spawn right now because of an event, but we aren't sure how long that event will last. There was a banner in the news tab on Tuesday but it didn't include a time or end date. After this "event" Mammoth will not spawn in the wild since we did not find it in any of the spawn tables. It is attracted by scents during the event so make sure you get out there and hunt those Mammoth!

Woolly Rhino is an incubator exclusive creature. We have already had reports of people getting it from the epic strike today as well as from the campaign mission prizes. You can also place it in a sanctuary and get DNA that way as well. As long as you are a player level that is high enough to interact with it, you can unlock a dino from sancs without ever having any DNA prior to that.

We aren't sure where the Maegaloceros will spawn (if at all) but we hope they allow us to dart it and the Rhino soon. We love getting new creatures but when a majority of them are locked up it is very disheartening.

A while ago there was an announcement about some changes that were being made to alliance rewards where they would be scaled to player level. They later announced that change would not take effect until 1.11. Now that 1.11 is here, they made another announcement about these changes:

To smooth out battle experiences when leveling up and aligning the Alliance reward with other level-based rewards received in the game, the amount of DNA a player can unlock will be scaled to the individual player’s User Level in a similar way as the battle incubators and the drone starting the week of December 9th, 2019.
You may notice the visual changes for this when you update to 1.11, however, the change in data will only take effect as of December 9th as stated.

Thank you for your patience and understanding.

This means that starting next week, the rewards will be scaled based on player level. We don't know what this scaling system will look like or what the difference in rewards will be, but we will update you as soon as we have more information.

When patch notes went live, there was a dedicated thread on the forum specifically regarding feedback about battle balancing. Since there were some significant changes made to creatures like Indoraptor Gen 2, Ardentismaxima, and Dracoceratops, they wanted feedback from players about those changes:

Our designers want to hear YOUR feedback! They are interested in hearing about your thoughts on the Dracoceratops change.

We have received your feedback regarding the battle balancing of 1.11. The team is looking into working on Procerathomimus, Dracoceratops, Cautious Strike and Ardentismaxima.
A survey will be available soon, where you can vote for specific balancing tweaks.

Congratulations to the Winners of the Giveaway!

As a way to express our appreciation of our readers we did a giveaway for a chance to win a $25 Google Play or Apple iTunes gift card. We had over 300 people combined enter for a chance to win. And we are excited to announce the winners of those giveaways!

Congratulations to these 2 winners! We will be sending the gift cards to the e-mail you provided when you entered. And once again, THANK YOU to everyone who reads these articles, we really do appreciate you.

We've had another exciting week and will make sure to update you on Sunday as soon as next week's event dinos are announced. We are also hard at work on the tier list already and plan on more articles soon with simulation results as well as best ways to counter some of those dinos we are all having trouble with (Like Indoraptor Gen 2). Make sure to joint our discord as well for more discussion!