JWA Opinion: Play your own game 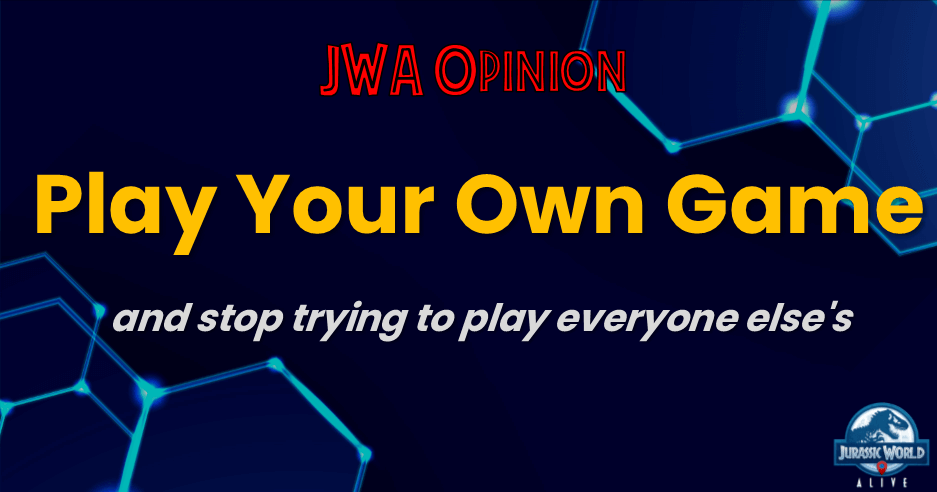 Every time I go on the forums there is at least one conversation or topic about changes that should be made to “prevent people” from doing something. Popular topics include: boosting only one creature on their team, dropping arenas to play at different levels, lower level players being carried through raids, players who spend money, advantage tournaments in general, and a variety of other things that are “unfair”.

While I don’t 100% agree with all the things people do in this game (I think dropping arenas to purposely beat up on lower level teams is a despicable thing to do), I am also of the mindset that it isn’t up to Ludia or other players to control someone else’s gameplay. Everyone gets the same opportunity in the game as everyone else to collect DNA, participate in Raids, join an alliance, and get out and hunt for creatures. As long as people aren’t breaking the Terms of Service, they should be able to play however they would like.

If someone chooses to level up and fully boost their Thor that is a choice they make. It might give you a hard time when you play against it and it demolishes your team, but what about the games the person plays when they don’t draw that creature? They are going to have a really hard time without it.

If a player wants to run a full team of boosted epics and rare creatures in the arena, more power to them! They aren’t stupid (as I recently saw someone call them on our discord) to level them past hybrid level, but choosing to play the game as they wish. They probably won’t make it to Beaches with a team like that but they probably do very well in the monthly advantage tournament with those creatures available. And you might be surprised what can actually do well boosted in top arenas. A certain top-level player won a couple of seasons ago with a Secodontosaurus on their team.

I think that’s one of the best things about this game. The ability to play it however you wish. Sure, there are creatures that are obvious standouts in the arena, but the game doesn’t make you play with those creatures. You can level and boost what you wish, and however you wish. We should applaud those that decide to do something different and play with an oddball team. It makes the game more exciting and often times it actually makes you stop and think when facing them in the arena.

We can't (and shouldn't) control what other players do

I know this game can get frustrating sometimes and I have been on that losing streak where nothing seems to go right. I try not to fault the players that are pushing me down at the time as they are just trying to play the game just as I am. As we make suggestions to Ludia about possible additions or changes that need to be made, let’s try and avoid putting more restrictions on people. We don’t need (and I especially don’t want) the game to tell me how I’m supposed to boost or what I can level up and use. It can get tricky sometimes in the lower arenas, but at the end of the day, everyone is eventually going to reach their wall. And they’ll have to keep playing and building to break through that wall.

If you are having an issue with a particular creature, work to build a counter. Keep hunting, keep fusing, and keep raiding to get that precious DNA you need to level up your team. Don't, however, expect Ludia to do that for you, and don't expect things to be implemented to "prevent" people from doing things in the game. The attitude of "other players deserve to suffer" is never the approach we need to take. This attitude drives people away from the game and that just amplifies the issues people often have with things such as matchmaking. No one deserves to be "punished" or "suffer" from a choice they made. There may be consequences for those choices (such as a buff or a nerf of a creature they leveled and boosted), but some people need to get off their high horse and realize that 1) it's a game and 2) we don't have control over choices other people make and that's what makes this game so great.

We should be coming together as a community and thinking of ways to help each other out. Many of us are competitive, yes, but we also need to think of ways the game can be improved to secure its longevity. That means encouraging more events such as boost reshuffle (that benefits everyone), stop calling for unnecessary nerfs on creatures just because they beat you, and stop asking for game mechanics that restrict play and limit people so much they just end up leaving.

If you are playing this game, it means there is something about it that appeals to you. Be it the sanctuaries, hunting, battling, raiding, or any other aspect of the game. Whatever you enjoy, embrace it and try to remember why you love the game as that is what is going to keep players around. At the end of the day, however, remember this:

You play the game you want to play, but don’t fault or condemn players for how they play theirs.

If you have thoughts on any of this (as I'm sure you do because we all have opinions) come join our discord and we'll discuss! Try to keep positive out there explorers!