JWA: When you lose the love of the game 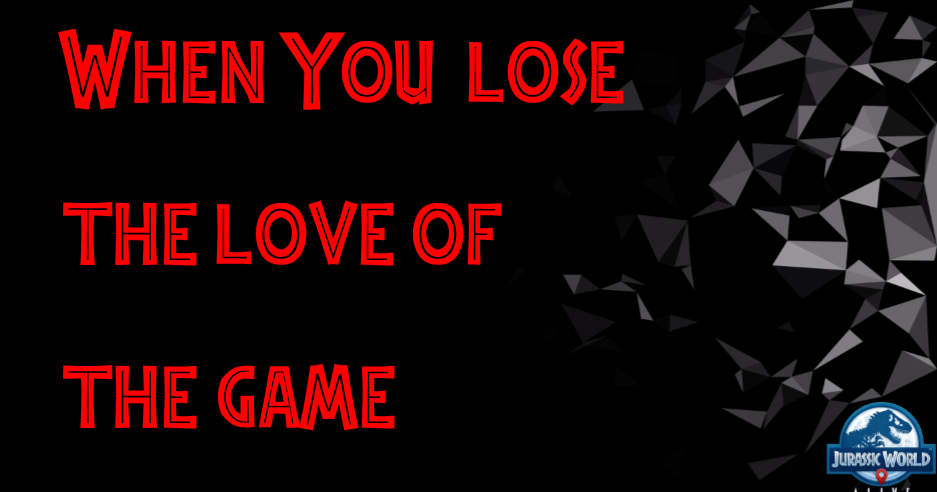 Disclaimer: This was by far the most difficult thing I have written for GamePress. It is a long, reflective, sappy post, but I felt the need to put this into words and for everyone to understand my JWA journey up to this point and the very difficult decision I decided to make.

I remember first being introduced to Jurassic World Alive. It was June of 2018. My husband and I are both Jurassic Park nerds and he told me about a game where we could play with dinosaurs. Right up my alley! We began playing together and loved hunting, battling and all aspects of the game. I eventually joined the forums and virtually met some amazing people. A certain dino butt thread led me to discord where I found a JWA family that led to alliance, that led to even more virtual friendships that I will never forget. Joining GamePress (formerly known as Metahub) as a mod, writer, and eventual admin locked me in to what I believed would be the long haul of the game.

As I continued to hunt and battle, my competitive nature came out and I got more serious. I remember grinding out Tapjoy offers and spending my Hard Cash on epic scents. I would drive to Local 2 every day at lunch and run a scent in hopes of getting Ourano so I could level up my Diloracheirus (when it ruled in the arena). As the game evolved and boosts were introduced I adapted with it. I have admittedly spent money on the game on various bundles and other in-game offers, but the thrill of the chase to the top of the LB kept me going. Going toe to toe with top members in alliances such as Apex Predators, Kelliance, TrykoCarnage, Top 500, and many many more was both exciting and humbling as I honed my battle skills. At my highest point, I ended 10th overall for the season.

The game has gone through many changes since that season, and even when I was unhappy in the arena, I would focus on tournaments and hunting. I started building advantage tournament teams and was able to achieve ranks I never previously thought possible. After Patch 2.0 went live, I realized I was not ready for a major meta change and I made it a personal goal to get all of the unique creatures to level 30 so I was never in that position again. I very recently achieved that goal.

So now what? I still have projects to work on but like many other players, I'm patiently waiting for another boost shuffle event or a meta change of some sort before I can really do anything.

Losing the love of the game

I can't say exactly when I started to lose the love of the game but it probably started around patch 2.1 or 2.2. The class system, matchmaking changes, trophy system changes, and rise of Apex creatures has made battling unbearable for me.

I hate the arena more than I ever have and even the thought of battling makes me sick. Last month I went over a week without battling at all and those incubator spots just sat empty. I only battled when I had a DBI in my daily missions and that's just because I needed the Rhino DNA.

I wrote a letter to Ludia in December expressing a lot of this frustration. They have admittedly addressed some of it (such as communication improvement). And the addition of achievements was a fantastic addition to the game that took my mind off the arena for a while and gave me something to work towards. I wasn’t expecting the arena to change overnight as I understand sometimes these things take time. But it's been almost 4 months and I personally haven't seen a change at all. In fact, it's gotten worse.

I know every player has different reasons for playing the game. Some do it for collection purposes, some like hunting, some love raiding, and others thrive with sanctuary management and coordination. But me? I love battling. Well, I used to. I loved pushing myself to be better and make my team better. I loved getting out of a bad situation using skill and the creatures I had in my hand. I didn't mind losing to more skilled players or that occasional crit or missed stun that didn't go my way.

Now, 80% of my matches are won or lost before I make my first move. It's all about the RNG of a match it seems. Not much skill involved. Whoever draws the better counter creatures to the other comes out the winner. No more playing around a bad matchup. Crits, team selection, and stuns (landing or missing) rule the arena now. It's a game of chomp and swap and it's only going to get worse as the Apex creatures continue to grow.

And let's talk about those Apex really quick. Remember me mentioning that I recently got all my unique creatures to level 30? That doesn't matter. All that time, effort, and resources I put into that achievement went down the drain when a lower-level team of Apex can just demolish me. This means nowadays, all you apparently need to do is raid to have an end-game team. You don't need to hunt or work towards anything else. Just keep boosting those Apex.

I love that Apex are a way for alliances to come together and raid and get DNA. I understand the point behind them and them being a way for some players to “catch up” to others. I don’t personally like that these Apex are so incredibly strong when they are what I consider “give out creatures”. Yes, people have to have the creatures to raid for them but I don’t like that they are so much more powerful than most of the Uniques people have worked so hard to create and level. Apex shouldn’t be “end game”. Magnus is ridiculous even at level 26 and is competing with level 30. Add on the fact that DNA from Apex is purely RNG base so everyone is at a different place with them even if they completed every raid every single week. Players need a reason to keep working on creatures outside of these Raids and right now it’s not there.

When the one thing that I truly loved about this game became unbearable, that's when I started to really reflect on how much longer I could continue. And it seems, it's not as long as I thought. And that saddens me to my core. The game I fell in love with is gone and I haven't found a really good reason to stick around.

A note to all the JWA players

I want to thank you. Thank you for the battles, the friendships, the laughs, the memes, and for letting me be a part of the community. Thank you for allowing me to provide content through GamePress and for your continued support. You are the reason I've even stuck around the last couple of months. Shout out to, GamePress Alliance, Sand Dunes Alliance, everyone in the APF Discord, and the JWA Discord.

I hope the new players coming in find something about the game they love and I hope that doesn't change for them. I hope they find a way to make the game better for the veterans that are still around that are just as frustrated as I am.

A note to Ludia

Please continue to communicate with the players. I've seen an improvement but they still need more. Let them know why decisions are being made. Let them get even a small glimpse into some of the changes the game could see in the upcoming patches. I know things take time to change and I don't think it's too late to make it better. I don't know how to make it better but something needs to be done and I hope you are able to figure that out. I don’t want the game to die, and I hope the balance is achieved.

I'm not sure what else to say as I feel the community has already expressed a lot of the frustration I have. I'm honestly disappointed and I never wanted it to come to this point. This game had so much potential. I understand the need to bring on and retain new players but don't push out the Veterans in the process.

I have mostly enjoyed the past 3 years of JWA. I have continued to stick around because of the people and friendships I have made. I have thought about “going casual” as many players have done but my competitive nature won’t let me. It has finally come to that point for me to hang up my drone, release my team into the wild and step away. I know I'm not the first player to make this decision and I know I won't be the last. This game will go on and GamePress will go on with it but it may look a little different. I'll stick around on discord for a little while as I'm not ready to completely say goodbye to the friends I have made on there. But consider this my goodbye to the general community. Best of luck out there, Explorers.