Op Ed: The Immune Meta is a Mess 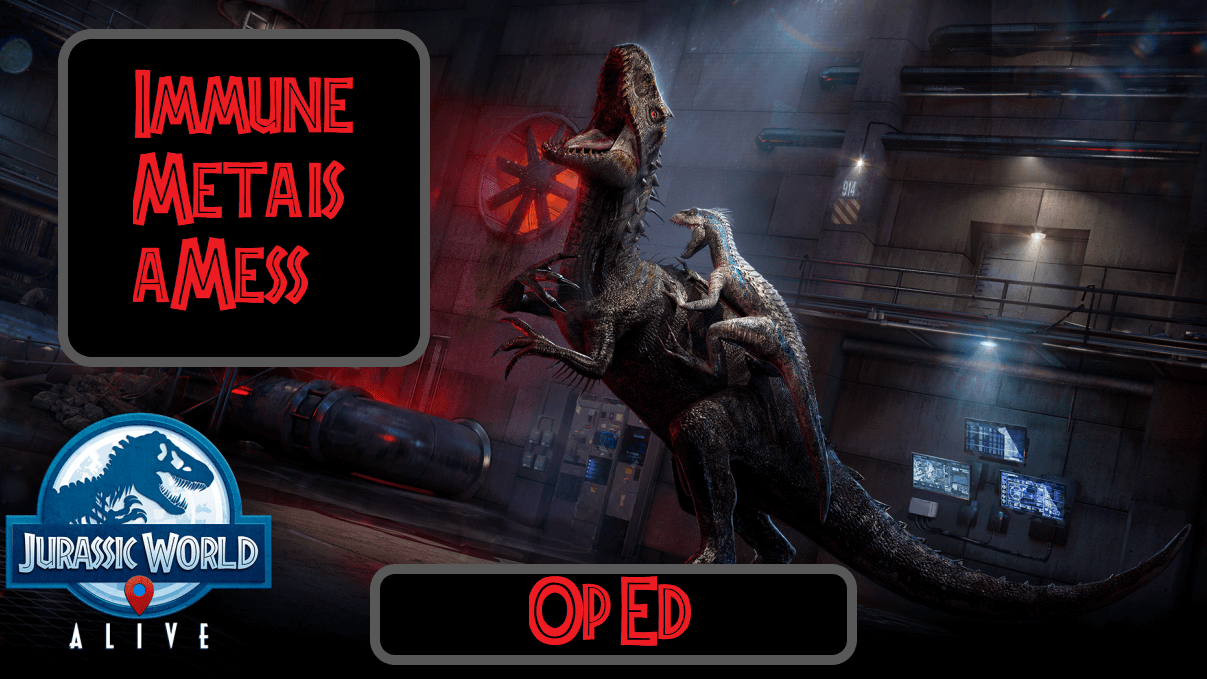 Warning: this article contains opinions. These dangerous things can be offensive to some people. If you are one of those people, please go read one of our other non-opinionated articles instead.

Ludia Community Management: Who are they really?

If you are still here, that means that the warning was not applicable to you, and as such you can deal with opinions! Great! Let’s get started!

There are some strange times in the game right now. Ludia has been teasing the next update with releasing creature families for quite a couple of weeks now and people are expecting some big changes. However, as these teasers keep rolling out at a slow pace, we also realize that the majority of the playerbase is on the verge of quitting. In our Discord server and on the Forums there are people repeatedly mentioning how they are so frustrated at a couple of things that causes them to (nearly) quit the game and also mention how the next update will be make or break for them. One of the biggest complaints is about the Arena. The Arena as of now is getting stale, with certain creatures running around that dictate what should be run or not by players: Immune creatures. That’s right, I’m attacking the big ones here, and I will be talking about how Immunity destroyed the Arena (at least for me, but I’m pretty sure that there are more people who feel this way).

A small history lesson on Immunity

Back in earlier updates (think update 1.5/1.6) there was a good usage of all kinds of creatures, as each creature had a task. Debuff creatures took out chompers, chompers took out tanks, tanks took out debuff creatures – you get the point. Then you had these other categories like DoT, Stuns and Immunity that were sitting to the side a bit, all with their own checks and strengths, but not directly in the rock-paper-scissors that the three main categories have.

Immunity back in the earlier updates was good, as everything still had a counter to it. Erlidominus did not have Armor Piercing, so Shields and Armor checked it, Magnapyritor wasn’t the fastest thing around so it could be outsped and had no Decelerating abilities, Indominus Rex got beaten by Shields – you get the point: Ludia made sure that Immune creatures still had a way to counter them. Enter Geminititan, Ardentismaxima and Partial Immunities.

All of the three aforementioned things came in 1.9, or at least became relevant in 1.9, so I consider this the turning point for the Arena’s Health. Geminititan gained Immunity out of nowhere, making it fully Immune to its biggest weakness: Damage over Time. It also caused Geminititan to be able to fire off big hits coming off its 1400 Attack stat without it being able to be stopped by Distraction, making it the best creature in the game. It also got a Speed increase to 110, allowing it to outspeed virtually every viable chomper except Tryostronix, taking the potential for Thoradolosaur to take it out away, while Tenontorex and Trykosaurus had to guess with Instant Distraction. In the same patch, Ardentismaxima got buffed, making it one of the best creatures in the game as well. With 5400 Health and 1300 Attack it might seem like a knock-off Geminititan, but it had the ability to DESTROY Shields and Armor but also allowed it to remove Evasive effects, making it virtually uncounterable with all the Defensive options we have (Shields, Distraction, Evasion and Armor). It now also HAD Armor, albeit a meagre 15%, but that caused it to be out of range for a lot of creatures and taking away the fact that you could just hit it hard to counter it. Now you HAD to hit it with an Armor Piercing or Defense Shattering move, vastly restricting the options for your team.  They had a method that caused them to deal with almost EVERY SINGLE CREATURE in the game, making them quite overpowered and limiting the options for your team immensely.

Then we get to the partial Immunities. I’m not going to lie, at first I was excited for them. They were announced that they were methods that would revive old creatures that had fallen behind and I was ecstatic about creatures receiving them to make them better. However, as the updates passed my opinion shifted in a complete 180. Now I think that they were a mistake and further restrict the possibilities of what is in your team. These Partial Immunities are mostly used to patch up weaknesses that a creature might have. For example, Carbonemys became Immune to Damage over Time, removing that weakness. Both Indoraptors became virtually unstoppable damage-wise because they received Immunity to Distraction and Stuns, therefore making their offense virtually uncounterable by any form of Defense as they also destroyed Shields and pierced Armor, making the only check to them Dodge, which doesn’t even work on Indoraptor G2 due to Cautious Strike.

The biggest offender of the bunch in my opinion is Mammolania. Before I even start about this Immunity you need to know that this thing has a 1500 base Attack which can be boosted even further by Persistent Ferocious Strike, a BASIC ATTACK with no cooldown, making its basic damage 2250. Add Definite Rampage to that allowing it to deal 4500 damage and your only defensive option would be Distracting it. Guess what Mammolania is Immune to? Yep, Distraction. So there is no real way to block that 4500 damage coming your way, which is Stunning to say the least. And even that doesn’t work all the time. Add that to the fact that Mammolania is bulky and fast enough to outspeed almost every creature that can possibly two-shot it except for Tryostronix. And with only 30 out of the 203 creatures having more than 4500 Health, it is capable of one-shotting almost 85% of the roster with just a boosted Definite Rampage, and there is no way of blocking it. And even if your creature has more than 4500 Health, good luck taking it out in two hits with its 4500 Health and 30% Armor. This is bad game design to take something so tanky and give it a method to deal with almost EVERY SINGLE CREATURE IN THE GAME if they are not prepared for it.

What makes Immunity such a pain?

The point I’m trying to make here is that there are so many Immunities running around, either full or partial, that it eliminates any form of variety in your team. Geminititan, Ardentismaxima and Mammolania are all extremely bulky and they cover their weaknesses with Immunities. These Immunities prevent an entire archetype of creatures to be virtually useless: Debuffing creatures. Lots of creatures like Erlikospyx, Spinoconstrictor, Utarinex and such focus on applying debuffs to your team. With all these Immunities running around and patching up the weaknesses that these debuff creatures prey on, you shut the possibility down for you to use them. Sure you can use them, I see plenty of Erlikospyx, Spinoconstrictor and Utarinex running around in the Arena because they can still be used, but that’s not the point. Immunities make those debuff creatures a lot less desirable, and all you mostly need right now is just raw damage, as that is the only way you are able to take out the Unique Immune Sauropods and Mammolania. And since Immunity is so powerful at the moment you will suffer from not putting an Immune creature on the team and it is basically ‘the more the better’.

I should not have to put specific creatures on my team to do well in the Arena or have the desire to work towards them because they beat EVERYTHING. That is a case of an unhealthy Arena as almost everything should be viable, not just Immunes or raw damage. I should be able to run most creatures and not suffer because of these Immunes.

How can Ludia fix it?

The best solution to this problem is to raze Immunity to the ground, obviously. However, as Immunity seems to be a staple nowadays I highly doubt that will happen. But we can further improve on the Partial Immunities. What we can do is remove certain aspects of full Immunities to make way for a counter. For example, Geminititan and Ardentismaxima could keep their Immunity, but they would remove the Immunity to Damage over Time. That way they now have a more solid counter, while still retaining the rest of the Immunities that they have. Still, I’d rather see Immunity completely removed as I’ve become quite frustrated with it as well as the majority of the rest of the playerbase. As of now I will continue to use my Immune creatures, simply because I have little other choice to do well in the Arena. Yes, you could say that I have become the thing I want to destroy. Unfortunately Ludia is the one who has the ability to make any changes and I hope this is something that is addressed in the next Update.

Well, there you have it. My opinion on the Immune meta. Again, this is my opinion, and yours may differ from me, which is totally fine! This article was never meant to persuade anyone, but I would like to hear from you guys what you think about this subject. Do you enjoy the Immune meta or dislike it? Do you agree with my points about creatures with Immunity/Immunities being needed to progress? Please let me know either in the comments below or discuss this subject with me and other people in our Discord! We are nearing 8000 members there, so there are a lot of people you can discuss all subjects with!

Thanks for reading this article! If you like what we do over here at GamePress, be sure to stick around for updates! Follow our social media (Twitter is the most important one!) and join our Discord for instant updates for when we post new articles or find useful information for you! Until next time!