Is RNG becoming too much in JWA? A Discussion Piece 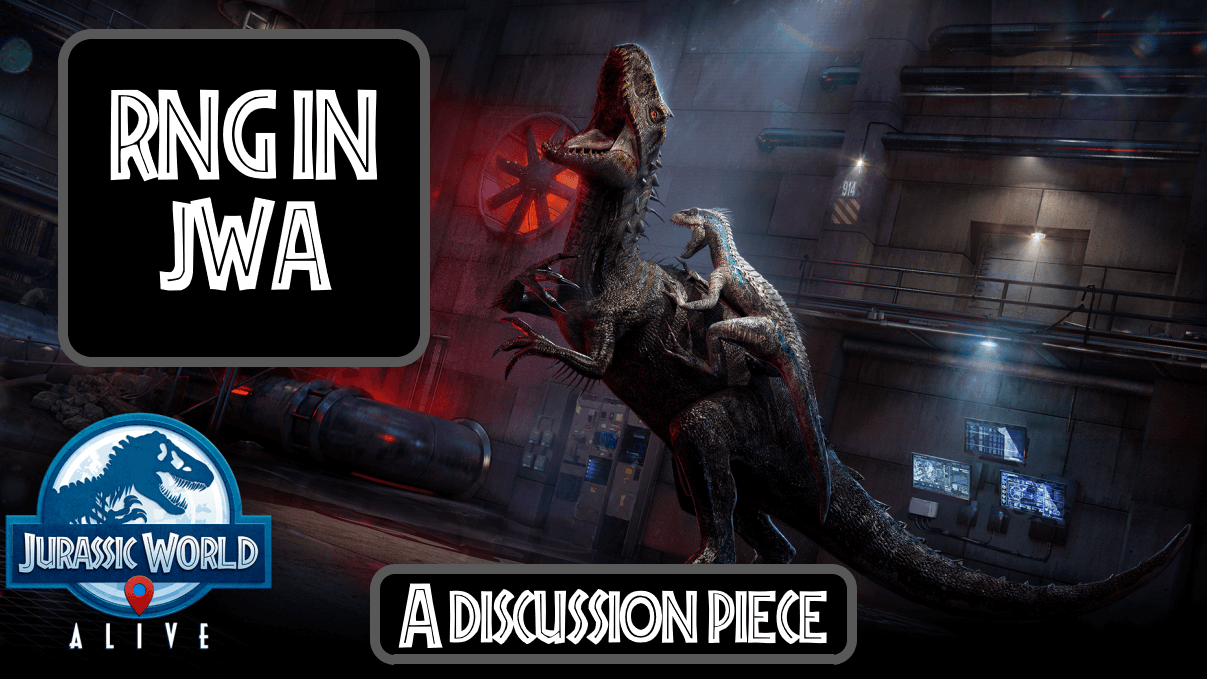 Although this is an article that focuses mostly on pure facts, numbers, and logic, before I even start with this article, I want to do a disclaimer I always do whenever something particular is involved in one of my personal articles.

WARNING: This article contains opinions. These dangerous things can be offensive to some people. If you are one of those people, please go read one of our other articles instead.

JWA: Building a Sustainable Player Base

JWA Exclusive Information: Next AC, Next Daily Dino and Next Weekly Event!

I’ve played this game for a while. I believe I started playing around Spring 2018, about a month after JWA released globally because I remembered still being addicted to Pokémon GO at that time. However, eventually I started playing JWA and quickly ditched PoGO to focus on playing JWA. I was addicted to the battling system at the time because of its simple, yet still complex system where there were many effects that could completely change the flow of the game. Stuns and Dodge being two of these effects. Critical Hits were able to completely turn the game into your favour by adding a 50% damage boost to your hit, so something like a Trykosaurus hitting you with a Critical Hit wasn’t exactly the most fun thing. I’m rambling on, you’ve all read the title, so you’ll already know where I’m going with this.

RNG is something that the JWA community has talked about for ages, both in favour of it and against it. However, this debate recently sparked again after the last couple of updates, where Ludia seemingly started to increase some of the RNG factors in the game, and people in the JWA community took notice of it. New creatures seemed to have a ton of powerful abilities where RNG was becoming a true factor in determining many of their effects, and their Critical Hit chances took an increase for no real reason compared to other creatures. So today, I want to analyse RNG in this game we all love to hate. When did RNG become so prevalent? Why is a large portion of the player base so incredibly fed up with it, even to the point of quitting the game? Is the statement “Skill doesn’t matter anymore” true? In this discussion piece, I want to analyse this phenomenon that people keep talking about and see if RNG truly has become a problem in JWA.

What is RNG and where is it found in JWA?

So first up, it’s important that we know what we are talking about. RNG stands for Random Number Generation. It is used to determine what is going to happen out of a certain chance that is available. The most common one is the Stun chance. Most Stunning moves have a 75% chance to Stun their opponent. The game will then internally randomly generate a number between 1 and 100. If the number is 1-75, the Stun will land. If it is 76-100, the Stun will miss. That is the basis of how RNG works, and it works the same for all kinds of things in JWA. I’m about to list off everything where RNG is involved in this game. You’ll know a lot of them, but some you might not realise or might have forgotten about.

As you can see, there is a lot of important things that are determined by RNG. I want to analyse all of them to see whether or not they could be changed, or if RNG is the best one for the game, even though it is frustrating at times (trust me, been there, done that).

When did RNG become so prevalent?

Thanks to Apex Predators’ Jackie for this following piece!

In order to fully comprehend the huge difference RNG is playing in the game we first must look at the progression of the game.

When JWA was first introduced it was all about rarity and levels. Personally, this was when true skill mattered the most. Sure, there were some minor issues like basic attacks with 20 or 10% chances to Stun, but those got removed from the game, as they should be. Next, Boosts and more Immunities were introduced. While skill still played a large role it slowly became more about the number of Boosts and what was Immune.

Battling in the Arena and Tournaments is now so RNG dependent that skill rarely matters. Everything now feels luck based and the majority of the player base feel the partial Resistance percentages are not what they claim to be.

These issues have resulted in a player base that spends more time frustrated and angry than enjoying themselves. Battling has become a chore that so many only do to help their Alliances. We have seen so many long term players leave because this has made the game so difficult to enjoy. The longer RNG issues aren’t addressed we will see more of the player base leave. People can only tolerate a game that should be based on skill be luck based for so long.

Resisting the urge to rage

As Jackie already pointed out, partial Resistances added a lot of RNG into the game. Resistances can be any number Ludia decides them to be, ranging from 25% to 100%, and it adds an extra RNG roll to whatever move you’re using that uses RNG. It doesn’t adhere to any serious steps either. To give a few examples of some numbers that Ludia gives Resistances, Monolometrodon has a Distraction Resistance of 25%, Compsocaulus has a 33% Resistance to Distraction, Acrocanthops has a 34% Stun Resistance, and Parasauthops has a 33% Stun Resistance. A 1% difference.

But those are only examples of Ludia’s wonkiness with Resistances. There are a number of effects in this game that rely on RNG. Stuns are the most common ones that people think about. Usually, abilities have a 75% or 66% Stunning chance, which is reasonable. You know what chance you have to Stun the opponent, right? And now the Resistances come in. These further decrease the chance for you to Stun the opponent, increasing the role that RNG plays. Because not only does the game need to roll a chance for you to Stun the opponent, but it also needs to roll again if it detects that you Stunned the opponent to see if it is still invalidated thanks to the Resistance. This is why you sometimes don’t even see the “Resisted” icon pop up above a creature, as the RNG determined you didn’t Stun originally, so the Resistance was not needed. But in order for your Stun to land successfully, you need to win TWO rolls of RNG. Tell me that isn’t just almost unnecessary RNG added to make things more complicated and less skilful. And let’s not even start with the Partial Resistance to Swap Prevention. That thing should just be removed in its entirety or only have 0 and 100%, because having a 50% chance to swapping out causes people to lose matches more than not landing a Stun, because not being able to swap out will cause you to lose a creature 100% of the time.

Praying to RNGesus for a good team

And that’s just one instance of RNG in the Arena. Another thing completely reliant on RNG is your team. If the RNG team generation gives you a team of Cunnings like Gorgotrebax, Phorurex and Compsocaulus and the opponent has a team of creatures such as Ankylos Lux, Arctovasilas and Skoonasaurus on their team, the Cunning team basically loses by default. Sure, it forces you to run a varied team to prevent these situations, but creatures such as Arctovasilas, Skoonasaurus and Ankylos Lux have ways to circumvent a number of classes and be at least somewhat competent at hurting every class. As much as I personally disliked the Immunity meta, you at least were able to work around a certain threat to your team by crippling it down and then taking it out with another creature.

With the current class system, this is practically impossible. The classes are too oppressive, cancelling each other out quite easily, so a balanced team draw is extremely important, but it also makes things much more complicated. If you for example only have one counter to Testacornibus, you need to keep it around for that deer, because if you lose it, you’ll basically lose the entire game if the rest of your team can’t deal with it. There are a number of creatures that force this, meaning that your entire game plan can be screwed around by the sheer potential of the opponent having that one creature on your team. And if you’re me, they’ll always have it.

With these previous factors discussed, I want to tackle the main quote: “Skill doesn’t matter anymore”. This quote has been said a couple of times now, and to be honest, I feel like it is becoming more and more true, especially in Tournaments. The fact of the matter is that RNG in this game simply became too much. It started off as a factor in a skilled game that could turn the game around, but it could be worked around. Stuns and such were annoying, but Ludia took appropriate steps to minimize the effects of RNG. For example, they removed basic attacks that could Stun, and they tweaked Dodge from Dodging 100% of damage to 66.7% of damage, meaning you’d always do a bit of damage. This meant that everything in the game had a countermeasure.

Now, your entire fate depends on it almost every match. Partial Resistances are everywhere, Critical Hit Chances have increased to a point where they almost become ridiculous and out of balance, and almost every creature now has some aspect of RNG to it. Think to yourself: when was the last time you truly had a match that didn’t have its outcome determined by RNG? When was the last match you truly felt like you and your opponent had a fair fight where the outcome wasn’t influenced by RNG in any way? I personally cannot recall one for at least the last couple months, maybe even years. Not since 2.0 started at least. Battles have become more and more RNG-filled than ever before, and to me, it is slowly killing the game off and making it less fun. And I know I’m not the only one who thinks this, so all we can do is pray to Ludia that they reduce their RNGesus worship and give us a game less reliant on praying to him.

This article was a bit longer than most others, so if you managed to read it all, thank you for taking your time to read it. I also want to thank Jackie from Apex Predators for her piece in this article. As you might have seen, this article is called a Discussion Piece. I want to use this article to make people discuss about this subject and share their opinions on the Forums, our Discord server, your Alliance chat, your Facebook group – everywhere you can think of. Just like the Survey Piere posted yesterday to hopefully call for a change in the game, let’s see if this article can also make a bit of an impact as well. If you want to join the discussion in our Discord Server, you can find a link to join right below this bit of text.