The State of Alliance Championships & Tournaments 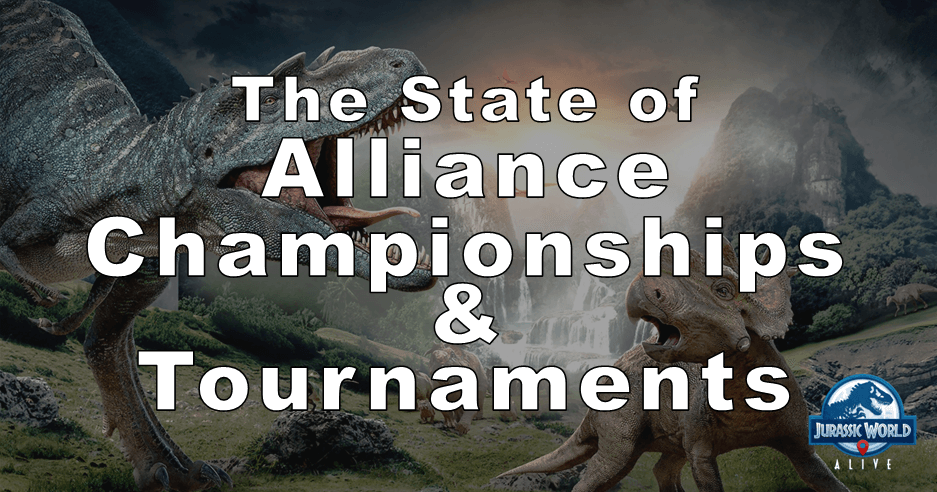 Tournaments have been around for a while with different versions. There was the original version which cost your green bucks to enter. Those didn’t work half the time & Ludia would have to refund people their entry fees. Those were ok, but prizes weren’t always great. However, it was a way to switch things up on the weekends. This was long before alliance championships were a thing, though. Ludia seemed to realize these weren’t working (literally & figuratively). Paying 50-100 HC to enter was a little ridiculous, especially with meh prizes. So eventually Ludia came up with a solution and created the current format, with the Alliance Championships.

Now I am a big fan of the concept of the Alliance Championships. This is really the only thing that has kept me going for the past few months since the arena has become just awful (that is a whole other topic). The formats were nice, the prizes have been great. It’s nice to be able to get coins & boosts monthly from tournaments (with hard cash coming around during 5 week sessions). The DNA is typically good. Once per AC, we get exclusive DNA, even if its not the best sometimes. The formats, however, started to get a bit boring around the 6 to 7 month mark. We see the same creatures week in and week out, and what was once different and fun became soooo boring. My eyes tend to roll when they announce formats and I see epic hybrids again. “Guess it’s time to use Rixis once again.” Now couple that with the fact that we are repeating rewards. Testacornibus again? Come onnnnnnnnnnn. I have learned through my life that when you present a problem, it’s best to come armed with solutions. So how can this be fixed?

First, I don’t truly expect anything from here on to happen. Ludia is going to do what they want. They claim to take feedback from the community, but they also said they would be more open and communicative with the community. That was a few months ago and ironically the last time they were open and communicative. If I were trying to spice up the tournaments some here is what I would do:

New Formats – I know people are probably thinking, “what other formats could we have?” Take a look at the trials. They exclude creatures or limit what creatures you can use based upon armor, moveset, class for example. Why not have tournaments like this? Exclude creatures with certain % of armor or crit rate. Exclude rending attacks or bleeders. These limitations could easily just switch it up. Could it get boring? Sure. But it’s definitely not worse then what is going on now.

Open up matchmaking- Right now you can only get matched with someone 150 trophies either way of your score. This really gets brutal when you’re in the top 10 and you want to play. You sit there for hours trying to find a match and if people in your range aren’t on, nothing. You spend so much time waiting and watching your screen time out over and over. People have to try to find opponents on discord or the forums to ask them to battle. Open it up to say 210-240 either way, and it could help keep battles going. One downside is that people could exploit this by asking their alliance members to get online and throw them matches to help them climb the leaderboard faster. Not saying this happens, but just saying…(it happens).

Tournament Blitz- I would love to see tournaments outside of the AC. Maybe just a 24hour tournament. Even if they wanted to bring back entry fees for this. I often see people who mention working at online poker sites before Ludia. They would run these tournament blitzes sort of like that. There’s an entry fee that goes into the pot, Ludia can take a little bit of a rake, and then the prizes are determined based upon how many enter. Of course, prizes can also be whatever. I don’t know or care really. I just think if there was like a 24 hour or even shorter time frames, that could be great. Imagine, you have some free time & boom a 3 hour tournament is starting. You can spend that 3 hours grinding out a quick tournament and hopefully come away with some nifty rewards. This would be a great opportunity for another source for exclusive and hard to find DNA! Something like this could also help alliances with their weekly missions by adding more opportunity to battle (and maybe even incubators as rewards). Ludia could run multiple a day so as to not exclude any time zones. It’s a win win.

New Prizes- This one sounds easier than it is. Obviously, Ludia would need to create new creatures to do this. Also, they would have to create exclusive creatures which are already obnoxious in the first place, but whatever. I’m all for new rewards. If the repeaters continue, next month is going to be Tenny Rex alliance championship again and that is going to be awful. Just awful. People will quit. I’m serious.

Fix Friendly Battles- I’ve seen some alliances who run tournaments on their own (we’re looking at you, Sand Dunes!) and put up their own money for prizes. These are fun because a lot of times they limit what creatures are available. It makes it interesting, exciting, and new. Unfortunately, friendly battles being horrendous at connecting really puts a damper on this. I know that friendlies have been bugged for years now, so I doubt this will ever happen. It sure would be nice. Also, I don’t think you should have to be “friends” with an alliance member to be able to do a friendly battle with them. But that’s just me.  Also it’s probably like 95% of the people reading this. The other 5% are probably just lost thinking that the cash link is part of this article.

Updated Leaderboards- Have you ever wanted to see how you finished among EVERYONE for an entire alliance championship? I know I have. That competitive nature in me would push a little harder if I knew that I could finish top 50 of everyone in game for an entire AC. Also maybe give a badge or a title for that? It would give players something else to push for.

Do you have any ideas or suggestions on how to improve battling experiences outside of the arena? If you do or simply want tell me how much you hated this article, my DMs are open on the GamePress discord. DadJokes #1609