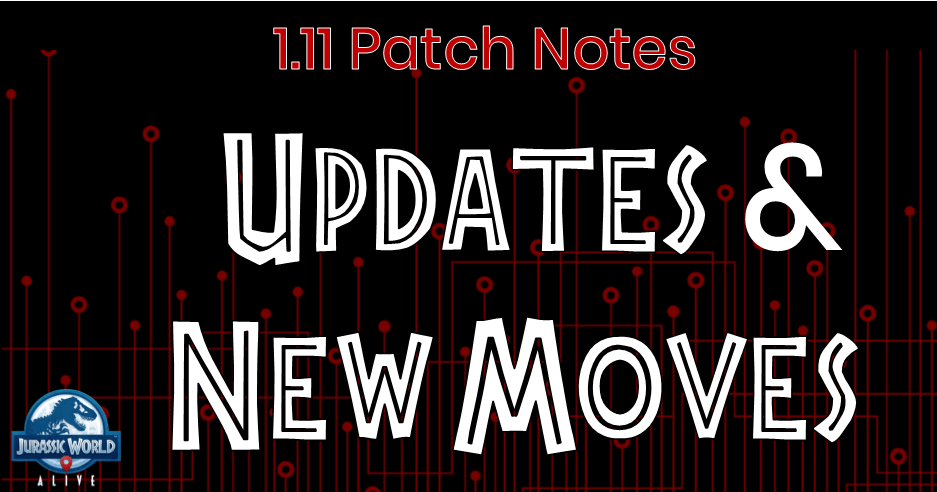 Usually, every patch (except 1.10) comes with a large list of new moves and an even larger list of creature rebalancing updates. And we nervously scroll through those updates hoping our favorite creature didn't get a nerf or that creature we love to hate finally got a nerf. This update has new moves and creature updates as well. The list, however, is very small but also very impactful. So let's dive into it.

There are 2 new creatures that get this ability (Woolly Mammoth and Mammotherium). Both creatures also have a rampage move so this is going to help that attack be even more devastating. It will act similar to ferocious strike or ferocious impact, but since it is a basic move, there is not a cooldown on it.

Dracoceratops and Dracorex Gen 2 trade-in their swap in rampage for this new move. It does damage equal to 40% of your dinos max HP (not current HP). So if you have a 4000 HP dino, it will do 1,600 damage. It does not bypass armor or shiels so if that 4000 HP dino has 30% armor the damage would only be 1,120. The nice thing about this move is it is all based on the HP of the creature DC is being swapped in on. So you should be able to memorize the swap in damage against your team based on the HP and armor they have.

So what does this mean for the rat twins that we all love to hate (or at least most of us do). We'll talk about creature balances next.

Just when we thought this move couldn't have any other abilities, they add another one to it. So now it will speed up, reduce damage, have a chance to dodge, cleanse, and deal damage through cloak or evasive abilities. Did we miss anything? Interesting they say this move is a "defense-heavy" as it is one of the most basic and smart offensive moves. Because of everythig it can do, most people are able to just use this move without many consequences (especially with the recent buff to dodge). We really hope they re-think this move as it seems to do way more than it needs to.

This powerful move is toned down by removing the cleansing component. The main goal is that swaps usually perform all of the required cleansing by virtue of removing the creature from the field… but we want to allow the “creature that wants to cleanse using a swap” to remain vulnerable to Swap Prevention negative effects. In this way, you can prevent Edmontoguanodon and Bajatonodon from healing and swapping out all the time with one well-timed Swap Prevention effect.

Note: As opposed to Regenerate and Run, the Regeneration ability still keeps its cleansing component.

This change should make lockdown and pinning moves much more viable. Since some of the pinning moves are instant, the creatures with Regen and Run would be able to cleanse the pin away. Or they could swap in and cleanse away their own bound move, heal, and come back again. The removal of cleansing will force these creatures to stay on the field if you pin them. They will also be bound for 2 turns no matter what after they swap in.

As we mentioned before. The list of updates to creatures was very small compared to previous patches. But they were also some pretty big changes.

According to the notes, they believe the definite move is what made Maxima so powerful so they changed it to DSR. This means that creatures like Indoraptor Gen 2  and Procerathomimus just lost another counter since Maxima won't be able to bypass or remove cloak or evasive abilities. We believe Max should keep its Definite move and just have HP and/or Damage mitigated accordingly. It is still a very strong dino, but may not be the king it once was.

Attack increased to 1500, but Swap in Rampage becomes Swap in Savagery.

This is a very big change to the very big problem that is Dracoceratops (for the most part). This will be especially helpful against the lower HP speedy dinos like Erlikospyx and Diloracheirus. Before they would usually take a hit and then immediately get taken out by DC. Since they have such low HP, the swap in damage will be a lot less than it is now. This also means, however, that people will just pour all resources and boosts into its HP so it can't be killed in 1 turn. To see the full effect of this change check out our article below.

Attack increased to 1500, but Swap in Rampage becomes Swap in Savagery.

Drocorex Gen 2 was hurt even more by this change than its hybrid. Simply because it doesn't have a regen move and isn't able to leave before swapping in again. It will probably still be used as the last kill in 2-2 situations, but most people drop it to run the more powerful DC.

Definite Rampage becomes Defense Shattering Rampage. This change was done in order to give players a choice. To guarantee that Indoraptor GEN2’s attack targets precisely, use the Cautious Strike!

Attack reduced to 1400. The attribute change was a tweak that should have occurred during the 1.10 update (when we implemented the dodge refactor).

We already talked about the changes to cautious strike so that will be the only way Indo 2 can get through shields. The attack reduction helps a bit, but we still feel like the basic move is what makes this hybrid so powerful (not the Definite Rampage it has now). The only good thing is if you are able to predict the DSR, you will be able to safely swap in dinos like Quetzorion to hopefully take it out.

A Note from the Designers

Because this is an important change, our designers want to hear your feedback. Your feedback about the Top Tier Tweaks should be posted in this thread, to ensure visibility to our dev team. We would be delighted to see your thoughts on the Dracoceratops change.

We highly encourage you to post your thoughts on that thread if you haven't already done so. They are making changes based on feedback so we need to make our thoughts known (constructively).

I'll have to see how everything with these changes plays out, but I am not particularly excited about it just looking at the notes. I am hoping to see a lot less DC, but expecting to see a lot more Indo 2 running around. Hopefully, they take the feedback we give them and really look at the creature balancing on these and all of the other creatures in the game. Make sure to follow us on Twitter and Facebook where we will keep you up to date with information, and join our discussion on discord as we talk about the patch notes and what it means for our teams and the arena!