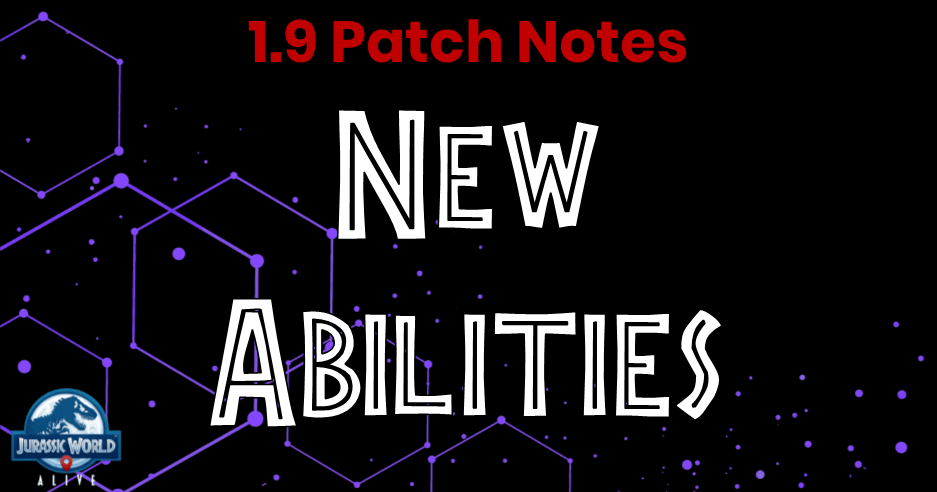 Patch 1.9 brings with it a bunch of awesome changes, and the biggest meta balancing shift we’ve seen since Thor entered the arena in 1.5. Bold statement? Maybe. But the highlights speak for themselves. We’ve got new terrifying hybrids like Carboceratops and Smilonemys (both sporting an INSANE 50% armor), a brand new meta-breaking move in Mutual Fury which makes BOTH you and your opponent stronger, insane new hybrids Indominus Rex Gen 2 and Indoraptor Gen 2 which use the beloved Raptor Pack DNA (Rip all that used up Blue/Echo DNA), balancing changes to Ceratopsians could be a nerf disguised as a buff, and a brand new Campaign Mode with some serious end-game level grit that’ll make an all 30’s boosted team shake in their boots – there’s just a lot to talk about.

There are several new moves this patch that are really going to shake up the meta (16 to be exact) and what we though we knew in the arena. First let's go over the changes to current moves.

Defensive Stance's Shield now lasts for 2 turns. This results in a lowered total HP amount for Brontotherium and Elasmotherium.

Defensive stance always seems like a waste of a move so this is a good change to a basic attack. It allows these 2 creatures to possibly live a little extra longer to be able to get off their big move.

This is an indirect buff to creatures like Utasinoraptor and Spinotasuchus that often rely on a crit to take out the opponent. Using the field guide app we can see other creatures that have this move include:

Rending attacks also got a big rework as all rending moves now have a higher percentage of opponent's max HP. This does NOT include rending counter attacks. There are not many dinos that have these attacks right now but we are getting 2 new creatures that feature one of these moves. Since the move is dependent on opponent's maximum health, they will not be increased by boosts, but can be affected by distracting moves.

Creatures with this ability include: Marsupial Lion and Spinonyx

Creatures with this ability include: Allosaurus Gen2, Marsupial Lion, and Thylacotator

Passive moves are going to serve a huge role in the arena and will make certain dinos viable again (looking at you Indoraptor). Basically these new passive moves will give immunity to a particular move instead of immunity to the whole dino. These abilities also indirectly give a nerf to dinos that rely on the moves that others can now be immune to. Let's see what they are:

This creature's speed cannot be reduced.

All of the creatures receiving this move are Fast, Low HP, High Turn 1 Damage dinos. This is really going to help their survivability in the arena and the possibility of doing major damage before going down.

This creature's damage cannot be reduced by distraction effects.

Ironically many of the creatures that are receiving this ability are distracting specialists themselves. So the distractors can no longer be distracted.

Creatures that receive this ability are:

Immune to Damage Over Time

There is only one creature that is receiving this ability, but it's a big one: Carbonemys. A tank with high health and 60% armor that can't be bled. That sounds like another Lord Lythronax or epic strike tower waiting to happen.

This creature cannot be stunned.

This move is a big one. Especially for Indoraptor (both versions). Since stunning makes your opponent lose a turn, this is a huge advantage to the creatures that receive it as they will now win matchups they may have otherwise lost.

This creature cannot be swap prevented. Note that if it performs a Swap in Ability, it is still bound

This move is a direct counter to any dino with lockdown or immobilize. It can still be stunned from immobilize unless it is immune to stuns, but wil not be bound for 2 turns. Phorusaura is the only creature that receives this ability.

Cleanse Distraction. Inflict Vulnerable Immediately. Vulnerable lasts until the end of the next turn. Speed decrease for 1 turn. Attack 1x.
Designer's note: since the attack is at the end, it means that you are benefitting from the Vulnerability this turn and the next! Bring in the Devastation!

Well that's a mouthful isn't it! Basically this move allows you to make your opponent more vulnerable to your next attack. So it is best used in combination with a high attack move. The decrease in speed basically means you are guaranteed to get off your big attack and take them out without taking any damage.

This move was given to all Ceratopsians. With only a 66% chance to stun you may want to use this move carefully to make sure you have the best chance to gain an advantage. It is best used against something that is slower than you so you can avoid any damage after swapping in. This SIA move is probably better utilized as a damage move with the armor piercing strike, more than than relying on the stun.

This move is pretty much just like the swap in stunning strike, except it does 0.5x damage instead of 1x damage. The only creature receiving this abilitiy is Carbotoceratops.

This is an interesting swap in move as it works best when you are swapping in a creature that has already taken some damage. Best use of it would be to swap in when you know your opponent is going to use a low level attack and you are faster. The only creature receiving this ability is Entelodon.

This is cleanse, distract, dodge, and speed up all in one move. It's a lot. and it also means it is hard to counter. Indoraptor Gen2 is the only creature with this ability and in their designer's notes they recommend liberal use of this move to allow it to survive longer.

This is pretty much decelerating strike with an additional turn. So it's somewhere between decel strike and thagomizer or slowing impact. We did not find any creatures that have this ability at this time.

This is basically a rampage with a cooldown. We did not find any creatures that have this ability at this time.

We have our first 3x move! This is huge and the largest multiplier on an attack we have seen in the game so far. It is still a rampage so it doesn't pierce armor or go through shield, but still sets a precedence for future 3x moves for sure.

Creatures with this ability are:

Many of the Ceratopsians that got swap in strike are also receiving this as their signature move. It is a cleanse, speed increase, shield and heal all in one. It is also available turn 1 so you might have the chance to get ahead of your opponent if you find yourself in a bad matchup.

This is an improvement on the basic shielding strike move. Allowing the shield to be active for 2 turns instead of just one.

Creatures Receiving this ability are:

Cleanse Self. Increase Damage 50%: 1 turn for opponent, 2 turns for self. Increase speed 10% for 2 turns. Cooldown: 1.
Designer's Note: Mutual Fury's usage is at its best when you are faster and your attack next turn will take out the opponent...or else, get ready to suffer the consequences!

This move is interesting because not only does it buff your damage for 2 turns it also buffs your opponents for one turn. So you have to be very careful when using it. If your opponent is low on health (say within a counter attack worth of damage) this would actually be a good move to swap in on if you have a counter attacker. While they buff their damage, your counter attack will also get buffed when you swap in and should be able to take them out before they can do any more do you.

Not only are we receiving 16 new moves this time around, many of them are going to be meta defining (such as the new passive abilities). Make sure you are checking your opponents stats as you see a new creature enter battle as it's going to take some time to see where all of these new dinos and abilities will fall. Follow us on Twitter and Facebook where we will keep you up to date with information,and join our discussion on discord as we talk about the patch notes and what it means for our teams and the arena!