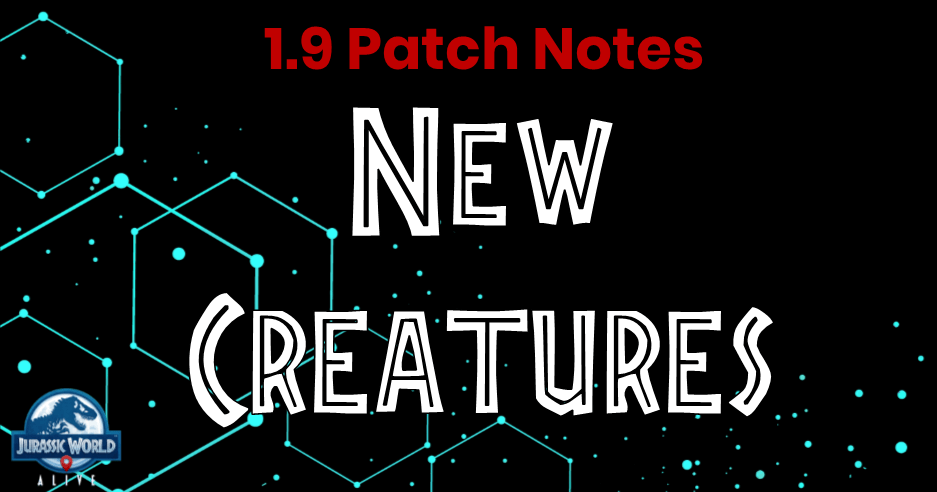 Patch 1.9 brings with it a bunch of awesome changes, and the biggest meta balancing shift we’ve seen since Thor entered the arena in 1.5. Bold statement? Maybe. But the highlights speak for themselves. We’ve got new terrifying hybrids like Carboceratops and Smilonemys (both sporting an INSANE 50% armor), a brand new meta-breaking move in Mutual Fury which makes BOTH you and your opponent stronger, insane new hybrids Indominus Rex Gen 2 and Indoraptor Gen 2 which use the beloved Raptor Pack DNA (Rip all that used up Blue/Echo DNA), balancing changes to Ceratopsians that might make Einiasuchus as valuable as Suchotator, and a brand new Campaign Mode with some serious end-game level grit that’ll make an all 30’s boosted team shake in their boots – there’s just a lot to talk about.

With the new update come some new dinosaurs, and we’re pretty excited about all of them! With 5 regular dinosaurs and 7 new hybrids we’ve got a total of 12 new dinosaurs! We already had an event with Allosaurus G2 and Nasutoceratops, so I won’t be covering these in depth in this article. However, we’ve still got a lot of dinosaurs to cover, so let’s get into it!

Let’s start with the regular dinosaurs, and we immediately got a game-changer to cover! Carbonemys is an Epic creature with the highest Armor stat in the game: a whopping 60%! With this it’s one of the best defensive creatures in the game. Oh, and did we mention it’s also Immune to Damage over Time? No way to Bleed this thing means its only weakness is pretty much Armor Piercing and Defense Shattering. It also got a way to dish out major damage with Superior Vulnerability and Devastation, two new moves! The new move Dig In also allows it to Heal, Cleanse, put up a Shield and get a small speed boost. This is a powerful Epic. However, we suspect that the Attack and Speed stats will be on the lower side because of the defensive capability of this creature. Still, it’ll be quite the powerful creature and we’re excited to see it in the arena!

The Rare Terminator Pig is in the game and it can dish out some major damage. With the new move Mutual Fury it’s able to do up to Trykosaurus levels of damage, which is a lot! Definite Strike and Defense Shattering Rampage also make it very good against those pesky dodgers and Shielding creatures, which is never a bad thing. It also got semi-reliable recovery thanks to its ability Swap in Heal, which restores 25% of its Health on every Swap in. Pretty powerful! And don’t think you can stun this thing to get rid of the Mutual Fury boosts, it’s got an Immunity to Stuns. Immunity will be covered some more in this article, so be prepared! Immunity is making a big show this update!

The speedy Rare Kelenken is almost like Phorusrhacos, but with higher Speed, a bit lower Health, Evasive Strike for more Evasive and damage possibilities, and with an Immunity to Deceleration. So it’s a high Speed creature with an Immunity to Slowing. That’s pretty powerful! If we take Phorusrhacos’ stats, we see that it has high damage, decent Health and 130 Speed. Kelenken will probably have the same 1500 damage, 131 Speed, because I doubt they’ll make something as fast or faster than Velociraptor, and maybe 3000 something Health. This Rare creature looks to be quite powerful!

We’ve got some Sanctuary Exclusive creatures to cover, which is pretty much Ludias way of saying: not obtainable in the wild at all. Those two are the creatures we’ve had last weekend: Allosaurus G2 and Nasutoceratops. And seeing as Nasutoceratops has a hybrid, you’d better start using your Toys, Interactions and Food on them! You can find more info about them in the article down below. 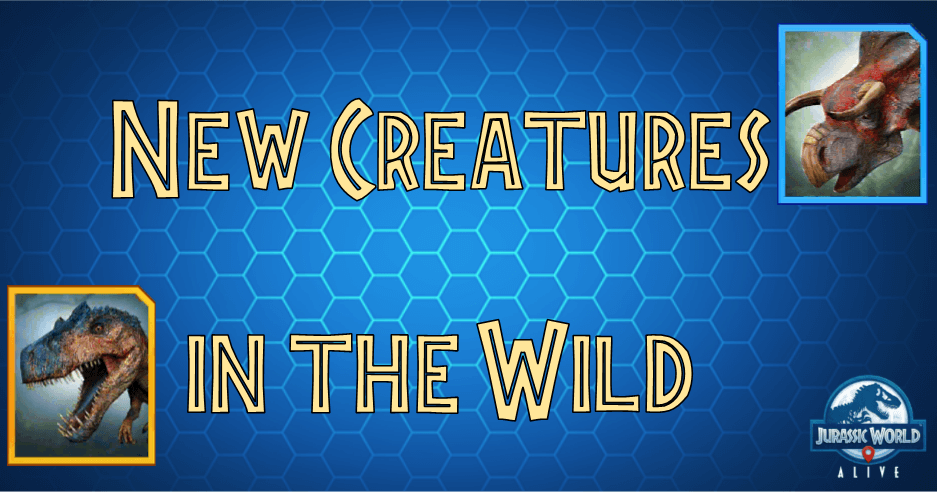 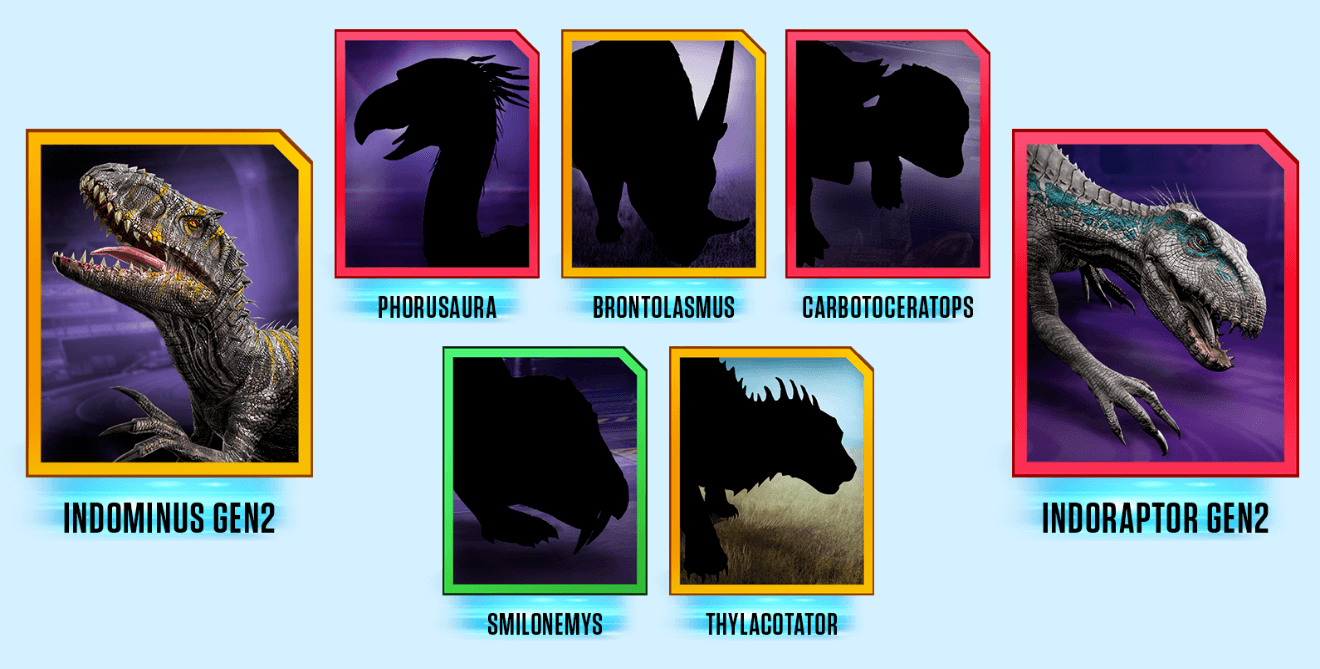 My favorite part of every update is the introduction of all the new hybrids. And let me tell you: These new dinosaurs are awesome. Let's cover them with the lowest Rarity first and work our way up!

One of our writers mentioned that we could possibly get a mix of the two rhinos Brontotherium and Elasmotherium. Guess he was right. Brontolasmus uses the best these two rhinos have to offer to create an incredibly powerful set of stats and moves that allows it to tank hits itself while also dishing out major damage to other tanks. Definite Rampage, Rending Attack and Decelerating Rampage allow for great damage while Long Defense Strike gives it great survivability. We’re very excited about this creature, as it’ll be very powerful in the earlier stages of the game!

Suchotator finally has a hybrid, and it’s a really powerful one. Using Thylacoleo, or Marsupial Lion, DNA it’s a very powerful creature with an incredibly versatile kit: Superiority Strike, Deliberate Prowl, Rending Takedown, Lethal Wound, Swap in Distraction and an Immunity to Stuns. This incredibly versatile creature sure has to be one of the most powerful Epics introduced to the game yet and we’re very excited to see it in action! Lethal Wound and Rending Takedown should be able to KO everything in two hits! Be very careful!

Ludia has finally done it. Gen2 versions of hybrids. This Epic Indominus has the same HP as its Gen1 version, higher Speed, but lower Attack. It keeps the Immunity and it has a different moveset with ridiculous damage potential: Definite Strike, Mutual Fury, Cloak, Armor Piercing Rampage. With this and its 1400 Attack, Indominus Gen2 can do up to 8400 damage in Friendly battles! This new Epic is sure to be a damage landmark on many lower teams! And creating it won’t be that difficult either, as its components are the Tyrannosaurus Gen2 and one of Owen’s Raptor Pack: Echo! We are truly excited about this creature and the possibilities for future hybrids it opens!

This might be my personal favorite dinosaur added this update. This beautiful looking Indoraptor is made of Indominus Gen2 and the Epic raptor Blue. Indoraptor Gen2 shares its base stats with the regular Indoraptor, with the exception of having a bit higher of an Attack Stat. This Indoraptor also has one of the best basic attacks I’ve ever seen: Cautious Strike. If you want a full overview, check out our new moves article! But Cautious Strike isn’t Indoraptor Gen2’s only move. It also has: Evasive Stance, Mutual Fury, Definite Rampage, and TWO Immunities: Immunity to Stuns and Distracting. This powerful Indoraptor is made to shake up the meta, and it will certainly do so!

This new powerful Legendary hybrid made out of the Carbonemys and Nasutoceratops is a jack-of-all-trades. With the versatile kit of Superior Vulnerability, Dig In, Distracting Strike, Devastation and Swap in Headbutt it can do all sorts of stuff. With a 50% Armor stat, decent Health and low Attack, this one will be more defensive, but it can go on the offensive if it wants to! We’re really interested in how it’ll do in the arena, seeing as defensive dinosaurs have always been hit or miss in the arena!

Combining the high damage Phorusrhacos and bulky Maiasaura led to this terrifying hybrid. With high damage moves, Swap in Stun, Sidestep, and running potential this is one mobile dinosaur with high damage potential. Don’t think about pinning it, because it has an Immunity to Swap Prevention. Immunity is becoming a big thing this meta, and we’re excited about it! It’s got the Attack and Speed of Phorusrhacos, meaning 1500 Attack and 130 Speed, and we expect it to have some of Maiasaura’s Health too! This will be one powerful dinosaur!

This hybrid. Ooh boy it’s a doozy. Made of Carbonemys and Smilocephalosaurus, it’s one of the best creatures in the game. 1500 damage, 50% Armor, possible high Speed and decent Health, this is going to be a game changer. Long Defensive Strike, Deliberate Prowl, Precise Pounce and Impact and Run give it a lot of diversity, and it can come in for free with its Swap in Stun. This is an end-game creature if I ever saw one!

This ends up all the new dinosaurs! Honestly, we can’t contain our excitement on this set of dinosaurs, as they all are excellent dinosaurs with great potential of being meta-defining. What do you think about these dinosaurs? Are you as excited as we are? What’s your favourite new dinosaur? Share it with us in our Discord server  and follow us on Twitter and Facebook where we will keep you up to date with information. And don’t forget to check out our other articles about Update 1.9 too! We hope to see you on our server, talking JWA 1.9 with us! Keep exploring!