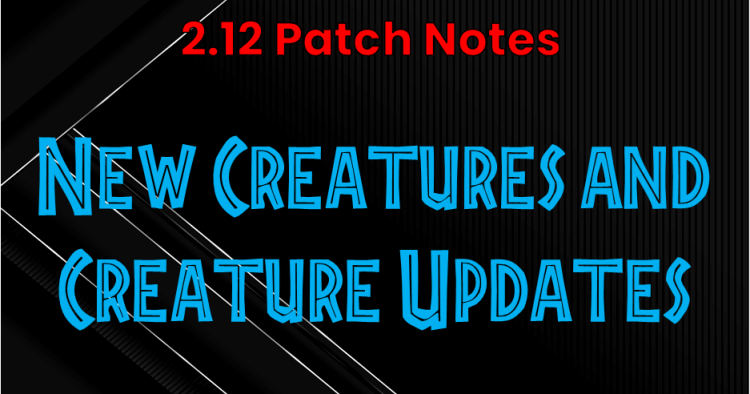 Update 2.12 is here, and it has brought a couple of new creatures, one of which is the first ever fusable Apex! Join us while we break down these creatures and figure out what they’re going to be like!

Arctodus is a new Bear creature in JWA, focusing on tanking hits while dishing out big damage itself. Heavy Strike allows it to Cleanse its Reduced Damage and Vulnerability while bypassing Armor and removing Speed Increase from the opponent, it can increase its own damage by Removing Shields from the opponents and increasing its own damage by 50% using Defensive Edge, and then hit hard with its Alert Decelerating Impact, which can also impose Vulnerability, and in its Threatened state, the Deceleration effect gets replaced by a Stunning effect! Arctodus seems like quite the powerhouse, and we are excited to see its stats and Resistances to see whether or not this bear has what it takes to do well in Tournaments!

We’re not sure why Cervalces is classified as a hit and runner due to not having an “And Run” move, but this Rare deer certainly looks interesting. It will stay Healthy due to Dig In and Swap in Heal, and the combination of Resilient Strike and Shielded Decelerating Impact will allow Cervalces to dish out decent damage. We don’t suspect that this creature will be as powerful as Arctodus, but that all relies on its Stats and Resistances, something that has not been revealed in the Patch Notes. However, you will need a lot of both Cervalces and Arctodus, as they fuse into the next hybrid:

Arctalces is a Legendary of Arctodus and Cervalces and combines their best attributes into one creature. It has Cervalces’ healing prowess with Dig In and Swap in Heal and a touch of Shielding, while taking the damage output from Arctodus and putting it all into this creature. With its Group Defensive Edge, Arctalces might see some use in Raids as well! Accelerate On Escape gives Arctodus a quick Speed Boost of 50% the moment the opponent swaps out, giving it a high chance of outspeeding its opponent the turn after. As always, Stats and Resistances are unknown, but later on in this article, you will find out why you will want to level this creature to quite a high level!

This new Legendary Hybrid is just Stunning! With Stunning Alert it can swap in very safely against lots of creatures, only to hit them with a powerful Superior Vulnerability, gaining speed control, and then having the options of three very powerful follow-up attacks! Alert Instant Shielded Impact seems like a very powerful attack, being a direct upgrade to Instant Charge, having a priority Stunning Impact which also Shields you. The chance to Stun lowers from 75% to 67% in the Threatened state, but it still keeps its Priority and Shielding attributes, so this is a powerful attack. Decelerating Rampage and Run is there to flesh out this tanks hit and run potential, while giving the teammate that swaps in a nice edge in Speed due to the Deceleration. Overall, a very good Legendary!

The first ever fusable Apex his here, creating a hybrid out of a Hybrid and Superhybrid. An Ultrahybrid if you want to coin a term? Anyway, this creature looks very powerful. All of its attacks have some crazy attributes to them, which you can read more about in the New Abilities article, giving Arctovasilas an extremely powerful kit to play with. Ludia recommends this creature to be taken into Raids due to its Alert Persistent Group Shields, which we can see why. However, this ability is just as powerful in the Arena as well, where Arctovasilas should shine as well. With Testacornibus as one of its components, we expect this creature to be very bulky, even with the now nerfed Counter Power Heal, as it’ll likely have a high Armor stat. We will see what will counter this menace, but we are very interested in the future of JWA now that Ludia has finally taken the path for fusible Apexes!

All of the new creatures seem very interesting, and the new Apex Arctovasilas seems like a very powerful asset to both Raids and PvP. What do you think of all the new creatures? Let us know in the comments below or in our Discord server, where we will share the hype for 2.12 with you!