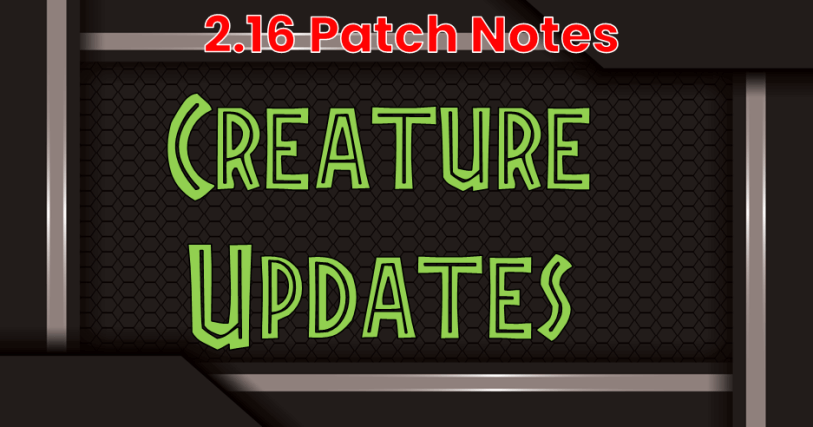 Explorers! Patch 2.16's notes have been released, and it is one patch that could see some shifts in multiple different arenas. Luckily We're here to break down some things and give our first impressions of what has taken place. So, let's hop in

DISCLAIMER: Things said in the notes and things in game on the day of 2.16's release can differ. Please just plan right now rather than level and boost creatures before they're fully released to us.

First up, we have the Super Distraction nerf. While this is a move change, it only applies to one creature. Ref is still able to fire this off turn 1, but it can't just cycle through now as well. Then to help remove random rng, the stun was also taken away. Overall a good change as there is already a lot of rng in the game already, and this 25% stun chance was one of the more annoying bits of randomness in the arena.

Now here's a controversial buff. Thoradolosaur got a good buff with more bleed resistance, stun resistance, and a cleansing group shattering impact. This helps Thor in upper arenas for sure, but it can really give lower players an issue. Right now, it's looking like lower players will really need to rely on those sauropods to deal with this unique in lower arenas.

Finally, we'll end on a creature that people were asking over and over for when it came to buffing old uniques. Indoraptor finally got a buff, and it got fierce rampage. It never deserved to lose its shattering abilities in the first place, so this is a nice change. It also received bait, which looks interesting and could be a big help for it. As for its overall changes, it's a start. It could use something to handle evasion, but this is better than what it was.

Overall some interesting changes. Some can be seen as good while others are controversial. What are your thoughts on these Creature Changes? Let us know on our Discord server! There are a ton of them this update, so there’s plenty of discussion to be had! We hope to see you on there!