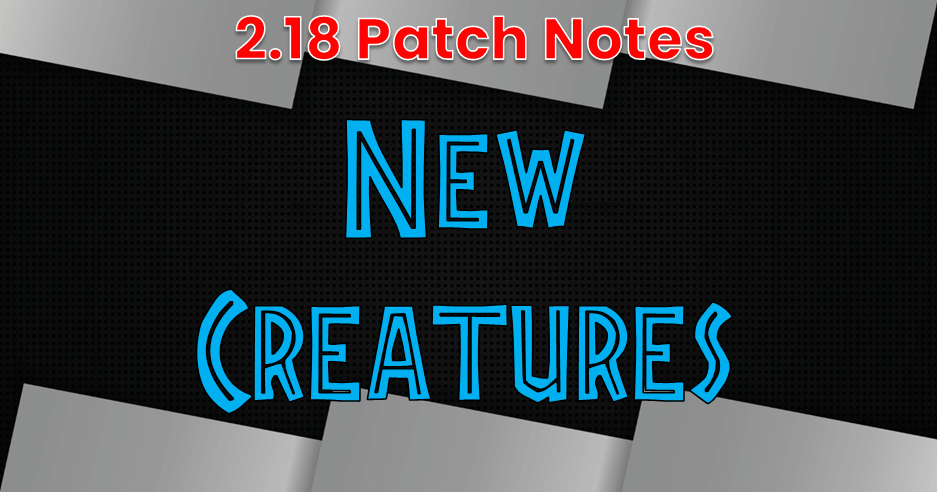 2.18 notes have just dropped, and boy do some things look interesting. Not only did many creatures get a good buff, but also many got a couple of nerfs too. However, the most buzz usually revolves around the newest creatures in the game. So it is my job to tell you what the newest creatures are and my thoughts on how well they could perform. So, let's unwrap these new creatures!

Moros Intrepidus is a nonhybrid epic

Kicking us off, we have ANOTHER flock. However, unlike most flocks, this one is a bit different and is following the trend of no rally healing. Moros Intrepidus is a fierce flock that now shares swap in fierce strike with Parasauthops. And like many of the newer flocks, Moros has no form of rally healing. This epic has some good stats and abilities, but some of its kit don't seem to work (unless Ludia changed some things). With devour, based off how healing flocks with no rally healing abilities (like a group heal for example or Giganotosaurus's showdown), it seems like the devour effect isn't going to do much to the point where it may be better with fierce impact. However, until we know the stats, we cannot count these little guys out just yet.

Oviraptor gen 2 is a nonhybrid epic

Dominion's Oviraptor comes into the fray as the epic Oviraptor gen 2! This dinosaur differs from its gen 1 counterpart in the fact that it lacks devious strike, but instead has a guaranteed critical hit on the strike. It also has a priority move that looks interesting, increasing your critical hit chance and distracting your opponent. This is especially helpful when paired with cunning rampage. And if you want to outspeed this epic, good luck with that as it has the somewhat new darting counter, allowing it to keep speeding up past the competition. And with swap in dodge, you can get a nice hit off for a small amount of damage. Based off its gen 1 counterpart, I am guessing distraction resistance, if not immunity like the rare and its hybrid. And speaking of Ovilophosaurus, if Oviraptor gen 2 gets those resistances, we may be looking at an absolute tiny terror of an epic.

Quetzalcoatlus gen 2 is a nonhybrid epic

Dominion's Quetzalcoatlus lands into the mix as a fierce and resilient swapper. This update seems to be giving creatures moves that were once unique to some creatures as Quetzalcoatlus gen 2 stole the panda's ferocious shielded heal move. And like that fuzzy feind, this pterosaur has swap in heal. To go with it, this creature can heal itself with fierce devouring cleanse like Giganotosaurus and can also swap away with a resilient rampage and run. And based off its rare counterpart, we could be looking at a bulky epic that'll refuse to go down. Based off the kit and Quetzalcoatlus, this is looking like another solid epic.

Red is a nonhybrid epic

In my opinion, Red is the most interesting of the new nonhybrids. Red is like Ghost in the sense that she isn't your typical raptor. With a resilient rampage that also has the berserk attribute as well as some good speedup abilities, Red looks very weird, but she could be very good when it comes to killing flocks and other speedsters. And based off Ghost's resistances, Red will have resistances unlike your typical raptor, with a more resilient set like vulnerability, stun, or deceleration. As for stats, she could end up being similar to Ghost, which is bound to be interesting. However, I do like that they keep straying away from the typical formular for certain creatures (Like a resilient raptor).

Lystrosavis is a unique superhybrid made from Lystrosuchus and Argentavis

Lystrosavis is one of two new uniques, and based off the silhouette and kit, it's another flock. This creature however looks like Lystrosuchus on steroids. You have a strike with more distraction, an upgraded swap, and all of its other moves have evasion. Depending on the stats, this flock looks like it could make a spot for itself in the meta, especially when it has a solid turn 1 option unlike Lystrosuchus.

You know what I find funny, Ludia claims they listened to us about decreasing the number of flocks, but here comes ANOTHER flock being crammed down our throats. Luckily Thylos Intrepidus isn't able to rally heal, but it does have an interesting and scary kit to a specific set of creatures. Crushing prowl and rending takedown WILL kill anything that is unable to remove the buffs, has an absorb effect or damage reduction effect, and isn't resistant to rend, which is a fair number of creatures in the game. You also have a devouring impact that bleeds as well as a rending strike that pins. Honestly not the most impressive flock out there, which is ok. We don't need more flocks.

Finally, we have the star of the patch. The creature we were all waiting for. Indonemyes won the poll done a few months ago, and this apex looks interesting. First up, it's got some unique moves. Speed control with its strike, devour with its impact, and distraction as well as a running ability with its rampage. And of course, we have prowling revenge cloak, which is a terrifying move. All of this make Indonemyes something to fear. Creatures like Diloracheirus and Imperatosuchus will not like this apex. And if you try to swap, well then Indonemyes has a nice little buff to its critical hit chance as well as some evasion while it can swap in and stun you, which will probably annoy Ankylos Lux. And devour plus cloak with the added ferocity from bait? That's a lot of healing no matter what. Overall this creature looks solid. Until the stats however, we can't say for certain if it'll be a meta creature.

And that’s it for the New Creatures! We have some new and interesting creatures for sure. It is a shame that we haven't seen a variety of rarities and have just been getting epic on top of epic on top of epic when it comes to the nonhybrids, but it is what it is. Fingers crossed for no flocks next patch. What were your favorite new creatures? Let us know in the comment section or in the Discord server! And make sure to check out our articles on the creature changes as well as the QOL features added.

And for those who forgot, here is a nice little diagram about the new hybrids: 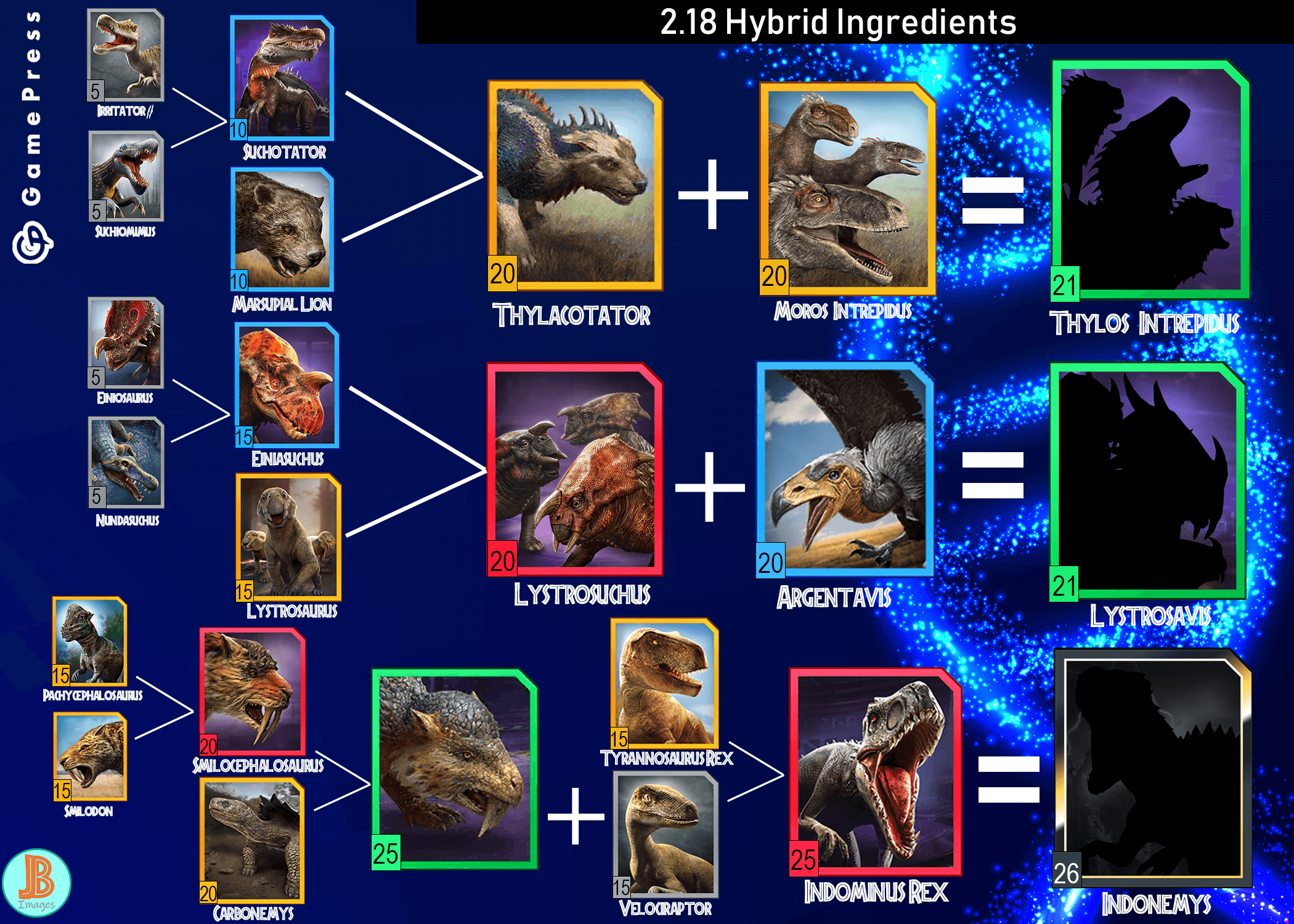