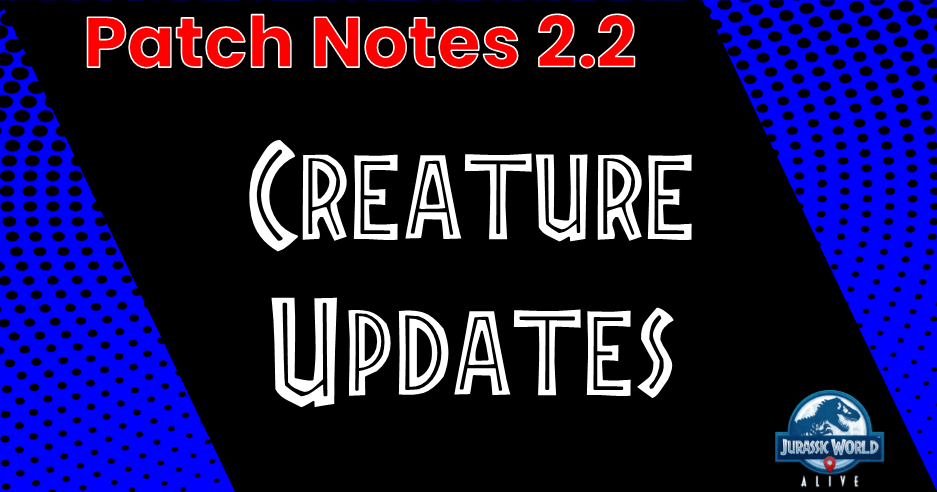 This article will focus on changes to creatures. There were quite a few creature updates with this patch but most of them were "minor tweaks". This weekend was the best weekend for them to announce these changes since we have the boost reshuffle event. We highly encourage you to not reboost until the patch is live as patch notes have been wrong before so it's best to make sure the abilities you expect are actually in game.

It seems that some of the reworks were made in relation between the creature power and the unlock rate. According to Ludia, the harder a creature is to obtain, the better it will be compared to creatures of the same rarity. They overhauled quite a few creatures but most of them were just minor tweaks. For a full list of creature updates, head on over to the forum post.

While there were a lot of changes, there are some definite winners of this patch. The following creatures got some buffs that could help them make more teams.

This is only an Epic creature, but a 200 Attack point buff will really help this already strong Tournament creature even more. It allows it to win more 1v1 matchups overall (especially against its own rarity). This was already popular in advantage Tournaments but we expect to see it even more often with this update.

This fairly new Legendary hybrid got another revenge move the the form of Revenge Rampage. It also got a pretty significant HP buff that could allow it to survive long enough to actually get off all 3 back to back Rampages. It isn't very popular in the arena right now, but could be something worth looking at, especially for teams running a lot of Legendary creatures.

Already a force on its own in 2.1, an additional Crit Chance is even better for this Cunning creature. It also can't have that Crit Chance reduced with its new Resistance. Critical hits are still very RNG based, but having a higher chance always means more opportunities of putting out even more damage to your opponent.

Ferocious Defense is a new move. It increases damage +50% for 6 attacks, lasting 3 turns and give Grypolyth 50% shields for 4 attacks, lasting 2 turns. On a Rending Counterattack creature, a move that buffs attack is incredible. It also allows Grypolyth to heal its FULL HP when healing after using this move. Add that to armor and high HP, Grypolyth is going to be tough to take down. you are going to want to bring some teeth or Rending resistant creatures to take care of it.

On a creature with 50% armor, a 300 HP buff is more like 450 HP buff against anything that doesn't pierce Armor. It also has 2 Shielding moves (one that speeds itself up and one that slows opponent down) as well as a Resilient Rampage that can take care of most cunning creatures. Expect to see some beefy Mammolania in the Arena with this change.

Suchotator got some pretty good buffs this patch. With both increased Attack and HP it will be even bulkier, allowing it to survive longer while dishing out Damage over Time or Nullify you. It also got a small increase in Attack, allowing it to dish out damage harder. This creature is now one of the strongest Rares out there and now it will be even tougher to deal with in the Rare Tournaments.

Thylacotator got its pre-2.0 Health back, and now it is back to being a prime Epic hybrid for top play. Its main weakness was being too fragile, so this Health increase makes it a very good candidate for taking Resilient creatures out.

Spinonyx got one of the best changes. With No Escape no Resilient creature can escape the onslaught of Fierce moves it brings, as it Bleed and Rends away at the creature opposing it. The added Health also helps it to better withstand the hits the opponent dishes out. This makes Spinonyx one of the best bleeders around, possibly even contending for the title of best bleeder.

The following creatures unfortunately got the short end of the stick, making them less viable. Let's go over them and see how htey got changed.

Unfortunately Monomimus is back on the train of it being constantly nerfed. With this Attack and HP drop it won't hit as hard anymore while also taking less hits. Will it be completely unviable? We don't think so, but it did take a hit.

Phorusaura got the biggest nerf out of all the creatures, and rightfully so if we might add. It dominated the top arena without a lot of counters. This nerf made it more in line with other creatures while still allowing Phorusaura to be somewhat viable.

Poor Pterovexus was already struggling to keep up in the arena, and now Ludia has decided for it to be nerfed. The Attack nerf is probably the worst part, as the higher damage to it was arguably the best thing it could offer. Now it will look like Pterovexus will return to just being a suicide Swap-in Bleed creature.

Brontolasmus got hit with a hefty HP nerf, one that hurt its survivability quite a bit. We're going to have to see how it affects its Arena play, but it isn't a good change for it.

People have been saying how Alloraptor is suddenly amazing because of the incredible offense it now has. But while this change might seem positive it's actually a real nerf for Alloraptor, or at least it changes how it should be played significantly. One thing Ludia did not mention is that Alloraptors HP is still a mere 3000. Any faster Cunning creature or even heavily Speed Boosted Fierce creature such as Thoradolosaur will still be able to oneshot it without Alloraptor ever doing any damage. As such, the thing it needed on T1 was a high-damage Distraction move. Ludia took its Pounce away and replaced it with Distracting Rampage, locking its big Distracting move behind a delay of 1. As such, Alloraptor now isn't a 1v1 creature anymore, but MUST be used as a revengekiller. But there are many creatures who do the Revengekilling act better than Alloraptor. And don't forget that it is incredibly vulnerable to being hit with a Swap-in Attack from Dracoceratops, Monolorhino or Woolly Rhino, showing just how fragile it is. Alloraptor has become the definition of a glass cannon, and we believe that this in general has been a giant NERF towards Alloraptor.

Speaking of the big green chomper, it got changed too. And we have mixed opinions about this. While in the Arena it might seem like it got buffed due to getting its Rampage back and having a HP increase, in Raids this creature just got demolished. The culprit is Group Shattering Rampage, which has a delay of 1. Thoradolosaur's main use was dishing out major damage to minions in the Raids first turn, getting rid of them. This was especially important in Hadros Lux  Raids, where Thoradolosaur would swiftly KO both minions who otherwise do big damage on T1. And in the Arena this change is also not the best one, as it won't allow Thoradolosaur to just cycle between Impact and Rampage, as the Rampage has a Cooldown of 2. So while in the Arena it might be a better option, in Raids Thoradolosaur got smashed big time.

Finally, we have Tryostronix, who received a welcome Attack buff. This allows it to take out creatures with 4200 Health or more after Ready to Crush and Fierce Rampage, allowing to better fulfill its Fierce duties.

These creature changes are welcome ones. While some have received some welcome buffs, others have received needed nerfs, and there are just some that we do not understand at all. Why Gigaspikasaur needed its Health nerfed - no one will know. What do you think of these changes? Let us know in our Discord server! We will be discussing all things 2.2 in there, so be sure to join if you haven't already!