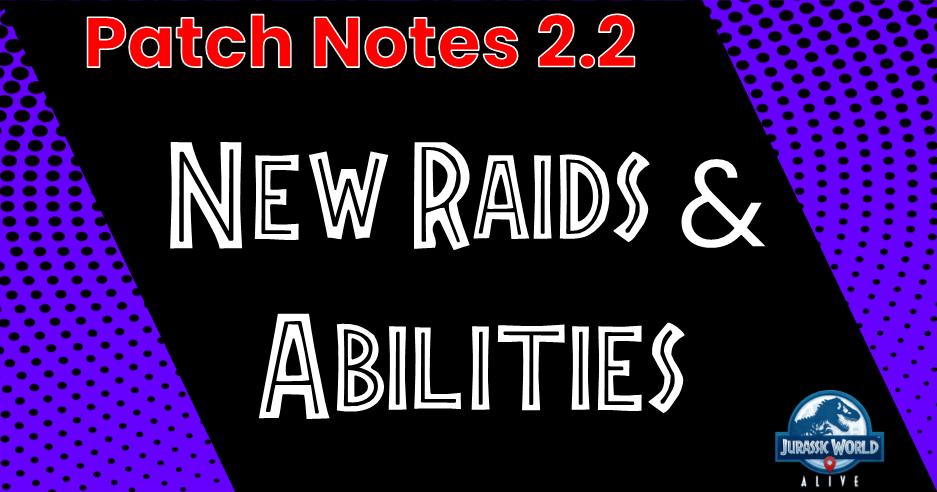 In this article we will be discussing the New Raids and New Moves. Ludia has introduced 4 new Raids and 3 new Moves this update. The Raids introduce a new Epic, Legendary, Unique and Apex of varying degrees of usefulness, while the new Moves all serve to give old creatures a new twist, not always resulting in a better case for them. Let’s go over all the new things in this Update!

Ludia has introduced new Raids for us. These are Woolly Mammoth, Megalosuchus, Indoraptor and Ceramagnus, the new Apex. Full honestly, while Mammoth and Ceramagnus are good additions, we feel like Megalosuchus and Indoraptor are not the best choices for a Raid. Megalosuchus had great potential but its kit let it down, while Indoraptor is fine as a starting Unique it quickly falls off for higher level play. They are worthwhile additions for mid-game players, but it seems like Ludia has geared the Unique Raids to people who already have a couple Uniques, and Indoraptor is not a good addition to the team for those players.

Woolly Mammoth on the other hand is amazing. This will provide people with a steady stream of one of the most desired creatures out there, having technically four hybrids with Entelomoth, Mammotherium, Entelolania and the freshly-buffed Mammolania. This is one that you will want to do each week as free Mammoth DNA is never a bad thing.

Ceramagnus is the new Apex creature. We go more in-depth on it in our New Creatures article, so definitely check that one out. 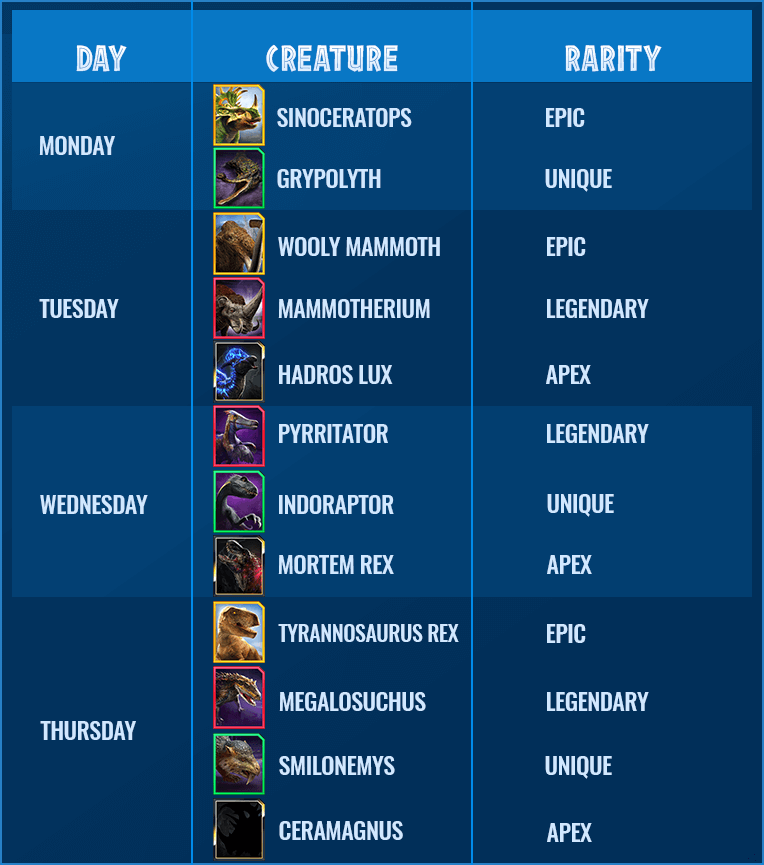 As with Update 2.1, Ludia will implement them in a timely manner. The release dates for these Raids are:

So each week we are getting a new Raid. If we take a look at the Raid Schedule this means that Thursday will be chock full of Raids, and it brings up the question if Ludia will keep the same Raid Bosses throughout the run of the game or also remove Raid Bosses in order to avoid some days being too crowded. Only the future will tell.

There were no mentions of what these Raids will look like, but we will look into this the moment the Update releases with the Datamine. If we do know what’s coming up we will share it ASAP!

So Ludia has decided to get three new Moves in the game. One is a direct buff to an already good creature, one gives an infamous green chomper its Rampage back, while the final one is a direct nerf to Ludia’s most Instant favourites. Let’s see what these moves are.

At GamePress we discussed how this change affected Thoradolosaur, and we came to the conclusion while this might be good for the Arena, in Raids Thoradolosaur just took a massive hit. Thoradolosaurs main boon was to hit all opponents with a big Shattering Impact on T1, something that was almost crucial in Hadros Lux Raids. Now it has Group Shattering Rampage, it cannot do this anymore due to the delay of 1. Furthermore, with the Cooldown of 2, you can forget about using your big Thoradolosaur in the Arena to just alternate Impact and Rampage like you used to. So in all honesty we think that this is a NERF to Thoradolosaur, hidden in a package that makes it look like a buff. We’re going to have to see how things will turn out for Thoradolosaur, but one thing is for sure: Hadros Lux just became a lot tougher to deal with.

This move will make Grypolyth a real pain in the neck to take out if you do not have any Fierce creatures. The Ferocity boost allows Grypolyth to Rend your health away with 37.5% of your Health each Counter, while it also allows it to FULLY HEAL itself with its Emergency Heal with a proper Boost spread. Not to mention that it will take less damage due to the Shields. This is a direct buff to Grypolyth and this will definitely cause it to rise in popularity and usage.

People have been calling for a nerf to Phorusaura due to it being able to do back-to-back Rampages coming off its 1500 Attack. Ludia heard this so they nerfed the Attack, but also introduced Delayed R&R to limit Phorusaura from using its Rampages right after each other. Honestly this is a nerf this creature needed, as it has been described in the upper Arenas to be just as disruptive as 2.0 Trykosaurus and Ardentismaxima were. Now Phorusaura is in line with other creatures, but still a force to be reckoned with. If you think this nerf puts Phorusaura out of commission, think again.

So both the new Moves and Raids are mixed results. Two Raids are amazing, two aren’t as much. One move really buffs the recipient, one clearly nerfs the opponent and one is a nerf in disguise. We can be wrong of course, we have been in the past, but we do feel like these moves are not as hard as a nerf as people think. Share your thoughts with us on our Discord server, where we will be discussing 2.2 with all our members. We hope to see you on there!