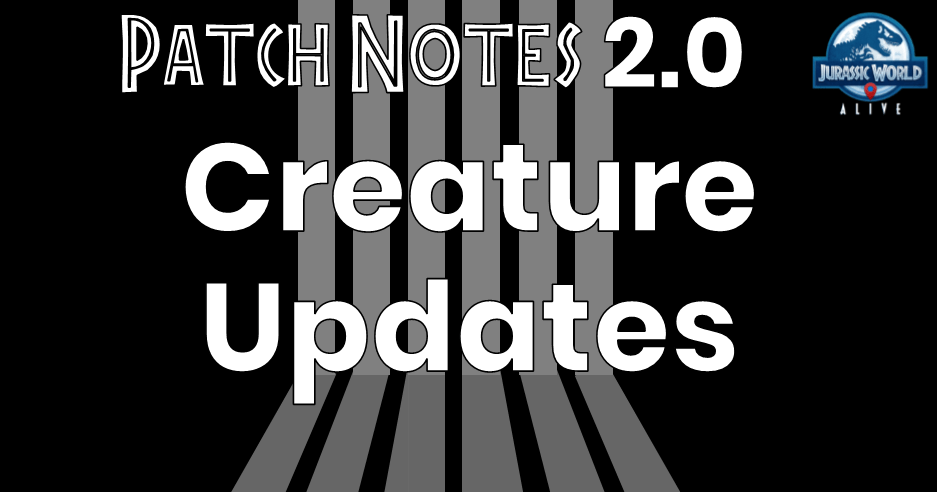 It can be really hard to process what the heck is even happening in the patch notes with creature changes. This is by far the largest update we’ve seen, but we want to help you process some of the biggest things we’ve noticed about creature changes and bring you up to speed.

We’ll be hard at work on our dinodex once update drops (which has to change dramatically) and hard at work on articles to talk about the biggest winners and losers and the sleepers we never saw coming.

Almost every creature got a stat change this update. So much so, they created an entire forum thread just for creature changes. We can't go over all of them, but let’s dive into some initial impressions right off the bat

I’m combining these two creatures together because the subtile changes they got are sneaky good. Time will tell, but Tryko may be too powerful now despite losing its instant distraction ability. Making it an armored, counter-attacking resilient/fierce creature is weird… but I like it. Especially that sneaky RESILIENT counter attack – which removes dodge, removes distract, removes cloak, removes speed increase, and smashes faces. Suddenly it becomes a great counter to all cunning creatures once again.

Dio getting a rampage in addition to keeping that precise counter and losing instant distract (because distraction belongs with Cunning) also is sneaky interesting. Where before the primary issue with this pure counter attacker was needing the counter attacks to survive, now it hits like a truck that doesn’t break shields but still – it’s pretty interesting. No more shield breaking counter, but essentially a more pure Resilient damage-based creature – dio should make for a stalwart in PVP and Raids alike.

Possibly my favorite sleeper of the bunch, Stegodeus got Resilient Strike and Resilient Rampage, two incredibly sneaky effective moves. Back in the day, Stegod was the only really good check against Indoraptor, and this makes it better at beating cloak than most things just due to the high HP, decent attack value, and the fact that it gets a rampage that beats cloak, speed increase, removes distract, and slows opponents down all in one massive slap. We may be seeing more Stegod’s in the arena to beat cunning creatures than we ever have in the past.

The removal of the defense shattering rampage may make sense for the new cunning class (which isn’t supposed to break shields) but it hurt IndoG2 badly. And the removal of its two primary immunities might have also been a bridge too far. So many have invested a lot into Indo Gen 2, and with the combo platter of resilient strike being so prevalent, superiority strike now hitting through cloak, and losing the immunities, this thing is not the world-beater it used to be. Don’t get me wrong, it still may be a key cunning creature, but it needed to be knocked down a peg and instead it got knocked down three pegs.

This feisty fiend has now become relevant again out of nowhere. With cunning strike and a massive attack and speed buff – as well as a crit buff, and some really cool resistances (75% stun, 34% swap prevention, 50% Distract, 50% DOT) it looks to be the heavy hitter it once was. Truly, these changes look to return this tiny annoyance back to its place of relevance once more.

In yet another half-expected nerf, Procerathomimus – the dreaded Yoshi -  gets blasted into oblivion in a few fell swoops. HP was reduced, immunity was removed (perhaps in favor of some resistances?) Attack took a dive, and HP took a dive. But most importantly, speed took a massive hit. It dropped to 127 speed. This is more a stats-based nerf than anything, but it seems as if Ludia took Monomimus and Procerathomimus and had them switch bodies.

Which brings us to Monomimus, that other chicken. Known to some as purple chicken, Christmas chicken, annoying chicken, roasted chicken, and now body-snatching chicken, this thing might be useful again. It essentially got the kit of Proceratho – with Cunning Strike, Distracting Rampage, Instant Distraction, got an HP boost and a big attack buff, and a massive speed change to 131. You heard me right – 131. We’re going to see more of these in the arena again. Giddy up.

Erlidom loses the hit and run mentality in favor of something unique – distracting impact. That actually buffs how much damage it can dish out in 2 turns, and the patch notes specifically call out Erlidominus as getting Revenge Cloak (under new moves). We discuss it under our new moves section, but Revenge cloak may seem extremely OP – but it’s not. It’s more of a trap than anything, and will require some finesse to play well. Still, the massive crit change to Erlidom (40%) makes it essentially what Thor used to be without the defense shattering. Crown Erlidom as the best cunning creature in the game at this point.

With two taunts and two 2x moves, Max seems to take the throne from Gem as the biggest baddest sauropod in the game. But one little note seems to stand out. “Immunity changed to None”. If indeed Max can now be bled, it may have gotten exactly the check it needed to make bleeders relevant again, and since fierce is supposed to beat resilient (and max is king of resilient now), it would seem to make sense to allow Max and Gem to be bled to death – which makes them far more beatable in the arena than ever before.

Just please Ludia, I love sauropods but please don’t give something like Max or Gem a heal.

In the new class structure, where distraction moves belong in the cunning group, Geminititan loses instant distract in favor of Instant Invincibility Taunt, and it takes a damage hit and HP hit to boot. This relatively minor debuff brings Gem far more in line with balance, and again assuming it can be bled, it should get the checks it needs to become a balanced tyrant and not a world beater. I love my sauropods but the two towers were a bit too tall. They needed to lose some punch.

Goodbye Tuora, it’s been nice, hope you find your… wait… maybe we shouldn’t get ahead of ourselves. While at first glance the changes to Tuoramoloch make it look absolutely worthless, it may actually have some secret value. Sure, in PVP it may be worthless now, but we don’t yet know how important healing is to Raids, and if healing is something that gets an entire classification of dinos, we have to imagine it’ll be pretty important to survival. So yes, Tuora has become essentially useless in the PvP arena, but it may have a silver lining. It may be one of the best healers in the game, if only it could hit something.

We could sing the same song for Dilorachierus but at least it kept a 1x and 1.5x attack, which is more than we can say for Tuora who can only 1x and heal itself. Dilorachierus has seemingly more utility than Tuora because it has both of the same heals (where it can alternate heals every other turn and often hit two in a row, but it can also distract and do some damage.

This change for sure takes Dilorach out of the running completely as a PvP… well… anything. Battles against it would be more painful than battles against a turtle, but it would seem to have a ton of utility in Raids.

This defense shattering hadrosaur that used to be a part of the big 3 is now a healer/attacker. It has one of the highest damages for a healer but no 2x heal, but it has the kind of kit that seems to help it in a lot more situations from raids to PVP. It’ll be interesting to see where Tenontorex ends up.

I can’t tell if I’m happy or really sad. All the cries to nerf Thor in the arena were mostly based on the speed issues that we’ve discussed before in other articles. The fact is, one speed boost is worth more to Thor than it is to any other creature because Thor is at the bottom of the speed pool.

Consider a max boosted speed Thor. It costs a player 2000 speed boosts to get to tier 20 speed. But that one creature now at 149 speed would require an opponent to boost 8 creatures to be faster. If every creature was 128 speed (they’re not), that means an opponent would need to use at least 9600 boosts to be faster than that one creature and actually do some damage. Furthermore, since Thor is assumed slow, it gets more health and attack for being super slow – and adding in speed makes it not just well rounded, but unbalanced ONLY WHEN boosts are limited. If we all had 10,000 speed boosts to spend, Thor wouldn’t be an issue. But when resources are limited, the benefit is greater on slower creatures.

Still, Ludia may have heard the cries of the people TOO much. Taking away Thor’s rampage and debuffing its speed in exchange for a minor damage buff and health buff might have gone too far. It really does make a creature that used to be incredible – possibly terrible. Time will tell. We’ll have to test it to see – and the group shattering impact may be super useful in raids – but it takes a pure PVP monster and turns it into something else. It may be a hit that Thor can’t recover from.

While this barely scratches the surface of the changes made in the rebalancing effort, at least it gives us something to chew on while we think about the biggest winners and losers in patch 2.0. We’ll be back for more action soon! Stay tuned!