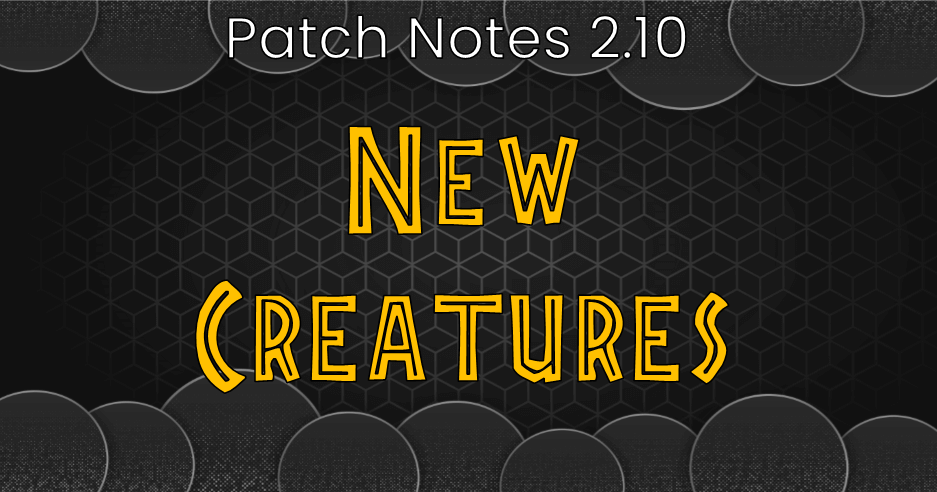 Explorers! Patch Notes for Update 2.10 are here and as always we have all the coverage on everything. This article covers the New Creatures of Update 2.10! We’ve got 7 new Hybrids ready to unlock, and each of them seems very interesting! Lots of Exclusive Hybrids though, that is something we are disappointed in. We hope Ludia will do more Events featuring Exclusive creatures because they’re getting quite plentiful. But with that little rant out of the way, let’s get right into it.

Argenteryx is the first Epic Hybrid Flock, and it combines the best aspects of both birds. A good basic attack that increases its damage output and Dodges, Fearless Alert to Rally Heal a lost member, and then two Rampages that provide Distraction and Evasion. Safely swap in with Swap in Distraction, and punish swapping with Alert On Escape Evasion. Overall, a pretty good creature, but it highly depends on its Stats and Resistances in order to truly do well in Epic Tournaments, as Resilients and Group Attacks are its main weaknesses. Shields also should do excellent against it!

The second Epic Hybrid to be introduced, Megalonyx is a true Wildcard, with a focus on Distraction. All its 4 moves will Distract you, but it also can increase its own Speed, Evasion, apply Vulnerability and bypass Evasion. Armor won’t be an issue with the Armor Piercing Counter, and it can swap in safely with Stunning Alert. On Escape Camouflage will buff its Speed, Dodge and Critical Chance when someone swaps out, so Megalonyx isn’t something you want to swap out against! Used all your Nasutoceratops on the recently-buffed-and-now-nerfed-again Testacornibus? Do not fret, as Megalotops will be on the map as a Wednesday Raid Boss starting September 22nd!

Glyptoceras starts the trend of Legendary Continental Hybrids, and we’re not a fan of it. We are a fan of this moveset though! It will provide Glyptoceras with everything it needs: Distraction, Priority, Stunning, Vulnerability, guaranteed Critical Hits – Glyptoceras has it all. The Stats and Resistances will be key to this creature’s success like all the others, but the moveset sure is promising. Non-Americans, don’t fret – this creature will also be one of the new Raid Bosses, starting from September 28th as a Tuesday Raid Boss! So there is a way for you to get your hands on it as well!

Rinchicyon is the second (and last) Continental Legendary so far. Europe has to wait for their turn! Rinchicyon is the result of fusing Amphicyon and Rinchenia, and it results in a scary hybrid. Alert Buff increases Damage, Dodge and it Cleanses, so it’ll have something in every situation. Then afterwards it can choose between Devious Strike, Fierce Impact and Alert Safety Rampage to dish out damage accordingly! A scary hybrid for sure, and that’s without Collision! This is a guaranteed Critical Hit on swap out, so it’s a very good tool for keeping your opponents in with you! Americans and Europeans don’t have to worry about unlocking this creature either – It’s going to be a Raid Boss as well! It’s first appearance will be on September 29th, as a Wednesday Raid Boss!

This latest Unique is an improved version of Phorusaura. Every aspect of it seems improved, at least moveset wise. Daring Strike gives it Armor Piercing and Distraction, Critical Sidestep is a Sidestep that allows you a 100% Critical Hit the next turn, Cautious Cunning Rampage is an Instant Cunning Rampage, and the cherry on top is Lethal Rampage and Run. If your opponent isn’t dead at the time this move is out of Delay, it will certainly be at this time. A Defense Shattering Rampage and Run that also applies 33% DoT. A ridiculous move to have at the end of a match. Phorurex will be a Thursday Raid Boss, starting from October 7th! This is a creature you definitely want to go for!

That lineup of moves says it all. Andrewtops is going to be a prime Counterattacker. Andrewtodon and Arctops have fused to create a powerful damage-dealer focusing on Revenge, Vulnerability, Distraction, Lockdown and Armor Piercing. A versatile creature that can do basically anything you want – Andrewtops is going to be a great creature if Ludia decides to give it good Stats and Resistances. Running low on Arctops? Andrewtops will be the final Raid Boss added to this Raid Roster, becoming a Monday Raid Boss starting on October 4th!

Ooh boy another Carnotaurus hybrid. Indotaurus has won the Community Vote on the new Creatures, and it brings a lot of Cloaking goodness to the table. Use Taunting Cloak in order to double the damage on the next attack, likely being the Greater Rending Counterattack, to do 66% damage minimum, and then finish them off with either Intimidating Impact or Cleansing Rampage. Swapping out on it will activate another Cloak effect, so Indotaurus will be a severe pain to swap out against! With the right Stats and Resistances, Indotaurus will become a powerful creature to go up against! Now Ludia, can we please stop with the Carnotaurus hybrids now?

7 new Hybrids have made their way into JWA, and there’s some for everyone. Which creature are you going for? Let us know on our Discord server or in the comments below!