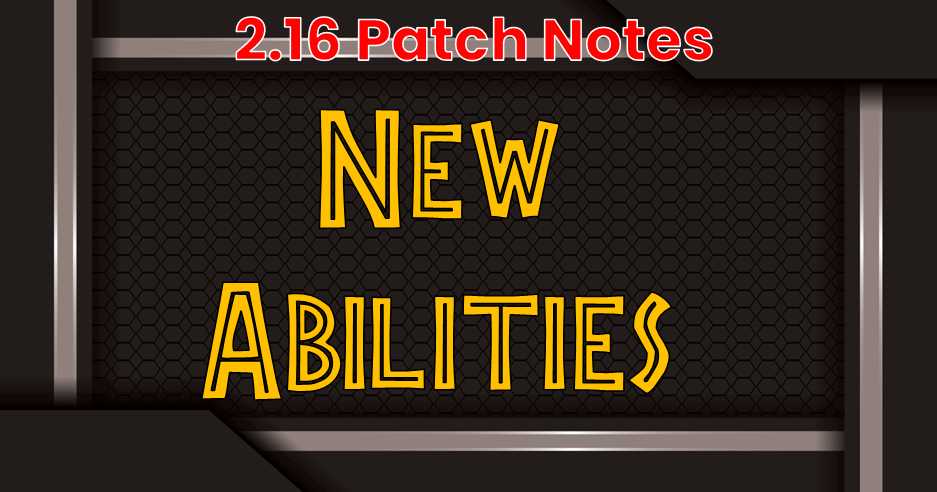 Explorers! Update 2.16 has just been revealed, bringing a slew of New and Improved things to JWA! GamePress has everything broken down into several articles, all for you to digest what is going on!

In this article, we will be discussing the New Abilities! All these new Creatures and reworked creatures of course need new Abilities to play around with, and there are some interesting ones in between them!

This Devour attack seems like it will be healing you for 20% of the damage dealt over 1 turn, meaning you don't have to wait multiple turns to get a good Heal in! It also Cleanses yourself, but we need to see whether this Cleanse comes before or after the attack, because this move would be a lot more powerful if it was before the attack! Other than that it is a regular Fierce Strike, which never hurts a chomper like Giganotosaurus and Giganyx!

This one is weird because we already have this ability in the game in 2.15, that being Thoradolosaurs Group Shattering Impact. This new ability is basically Group Shattering Impact, but then with an extra turn of Cooldown. We have to raise our eyebrows at this one, as it just seems like they are trying to make Giganotosaurus suffer against Flocks a bit more.

This move for Therizinosaurus is interesting. If it is Secure, it's a Precise Rampage with a Delay, meaning you're either choosing to Speed Up with Minimal Speedup Strike or increase your damage with Cunning Ferocious Strike. However, when Therizinosaurus is threatened, it's a Priority Rampage (It loses the Precise!). Both having a cooldown of 1 means that Therizinosaurus will be dishing out this damage quite rapidly, so be on guard against this one, and be sure to check if Therizinosaurus is Threatened or Secure!

This new Giganyx ability is a Fierce Impact that also prevents the opponent from Swapping for two turns. A good addition that makes Giganyx a bigger threat if it manages to lock you in with it!

This ability for Giganyx pretty much combines Refresh and Ready to Crush from its Tryostronix parent. Increasing Critical Hit and Damage from Ready to Crush, Cleanse, Heal and Speed increase from Refresh. Giganyx gets everything it needs to set itself up rapidly after using only one move, but it needs to be wary of the one turn of increased Speed, which differs from Refresh's longer Speed increase. Overall, a welcome ability for JWA, and it'll be interesting how Giganyx will play around with it!

This is basically Dig In, but then with Dodge and a Rally Heal. It has a Delay on it to prevent the users from swapping in, Healing and Cleansing the Lockdown and getting out, which is good design on Ludia's part. With a Cooldown of 3, you probably will not survive to use it another time unless you swap out, but it is good to get another Rally move that doesn't do loads of damage while using it. Makes you choose between survival and damage output, and that's good! Let people use their minds a bit and play more strategically.

Dreadnoughtus will surely survive a lot longer thanks to this move! Taunting Shield Rampage is a Taunting Rampage that also has a 50% Shield for 4 attacks, 2 turns. You can't use it Turn 1 due to the Delay, but pair this with Dreadnoughtus' Slowing kit, and you're likely to get that Shield up before the opponent attacks a second time!

Impact and Run but with a chance to Stun. That's all there is to it! It might seem counterproductive to have the Stun on this mobility move, but it can create openings for you to avoid a deadly OE ability! For example, you can make sure Ankylos Lux does not get its Invincibility up thanks to On Escape Invincibility, meaning you can hit it with a Swap in Stunning Strike for full damage! Or just use it to swap in your next creature safely, that's also cool. But a And Run move that has a chance to bypass On Escape moves is very strong, and it will be quite useful!

Everyone calm down, Thoradolosaur Raid strategies will not be killed off. Thoradolosaur gets this new ability, giving itself the ability to Cleanse all negative effects. We don't know if this is before or after the attack, but it should help Thoradolosaur a bit paired with its increased Resistances.

Counterattacks, On Escape and Swap In Abilities

This new ability for the Indoraptor gives it an extra bit of survivability, as well as a bit of extra punch behind its attacks. When taking a hit, Indoraptor will Distract the opponent and increase its own damage with 25% for one turn. Not too much, but this should allow Indoraptor to be a bit more difficult to take out, as well as punch a bit harder.

This new ability is No Escape, but it also increases your Critical Chance with 30% for 2 attacks. I mean, it's fine. Nothing too special from No Escape, but it could be decent. Not the most exciting ability introduced in this update.

This one however should be very exciting. When Threatened, the user swaps in and will fully Heal itself and its Opponent (Note: It is unknown how Flocks are affected, but seeing as there is no mention of Rally Heal, we expect that Flocks only get healed to the maximum HP of the current Flock member), and to make sure it is a true Showdown, the opponent gets Stunned 100% of the time and gets locked in with the user for an old fashioned 1 on 1 brawl. This ability is mostly useful when you are faster than the opponent, which is troubling for the Giganotosaurus as it is mentioned as a Slow creature, but its evolution should be able to fix that.

And that's it! Those are all the new Abilities that have been introduced into the game in Update 2.16. What is your favourite new ability? Let us know in the comments or in our Discord server!