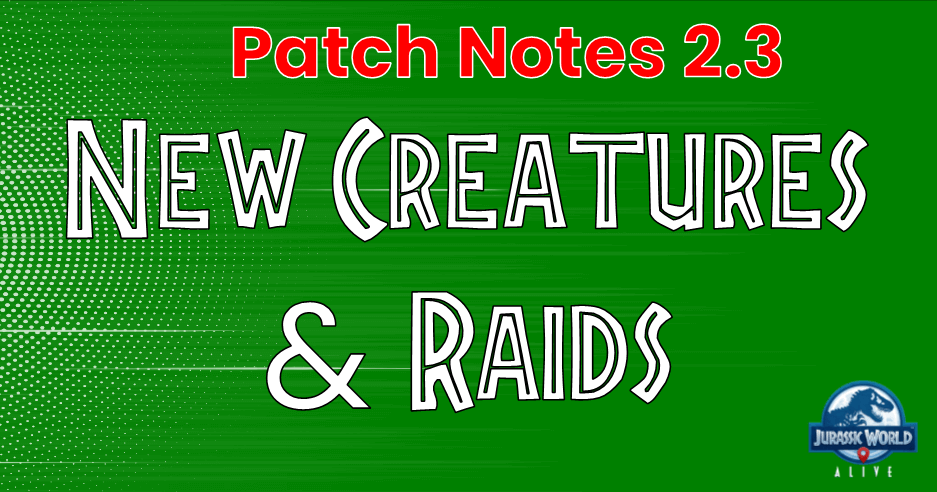 Patch 2.3 is upon us and it brings a lot of news to the table. New Creatures, Creature Updates, Raids, QoL - all in one package! We have coverage for everything that is useful to know and you can find it in the articles linked below:

In this article, we will be going over the New Creatures. There are some very special instances for these creatures, so be sure to read on!

With a kit very much resembling Andrewsarchus, Amphicyon seems like the Common variant of it, albeit lacking the Rending Takedown. 3150 Health is a great Healthpool, staying out of range of the 3000 damage Rampages, a Resilient Strike + Rampage combination from most Resilients and even the 3100 Velociraptor Pounce. 1300 Attack is not bad either, and No Escape is always a great Ability to have. Its 100% Deceleration Resistance is also useful, allowing it to stay ahead of most Resilient creatures with its 122 Speed. Overall this looks like a great Common to play around with and it definitely has great Hybrid potential.

Ludia seems to give the 132 Speed mark to a lot of creatures now. As a Cunning creature, Gorgonops has good multipliers and ample Distraction abilities. Revenge Rampage gives it great damage output, even with the 1100 Attack stat it has. This creature also has 3150 Health, allowing it to once again survive the Velociraptor Pounce and all 3000 Rampages. With two Resistances to Distraction and Critical Chance Reduction it will also continue to keep the damage coming even if people wanted to apply Distraction to it. We will have to see how this creature will fare in the Arena and in Tournaments, but it definitely looks promising.

We are finally getting another Ankylosaurid! Antarctopelta is the next Anky that is in the game and boy does it look good - both kit and design-wise! Superior Vulnerability is always a great move to have, as it improves damage for the next attack. Add Revenge Instant Ferocity to this and you will have great damage with that Decelerating Counter! It will be protected with its 30% Armor and Taunting Shields, allowing it to live longer against its opponents. Overall this is a pretty great creature and we are happy to see it in the game.

Megistotherium gave us something that we all desperately need: An Epic Woolly Rhino and Diplodocus counter (or at least a 64% Counter to the latter one, it needs one Critical Hit). With 1350 Attack and a great movepool, Megistotherium can dish out the damage to take out a lot of creatures. No Escape allows it to trap any creature attempting to escape. Swap In Ferocity will also help it dish out damage, but it is a risky move due to its not-too-great Health stat of 3600. 120 Speed and 100% Deceleration Resistance does help it to outspeed some major threats and stay faster than them. Overall, a great creature.

This is JWA's first non-hybrid Legendary, marking a major shift in the spectrum of the game. Parasaurolophus Lux is a healing machine focused on Raids, with two Healing moves as well as a Group Cleansing Strike. No Resistances, but this creature got a lot of Healing presence, meaning that it will not die quickly. 3900 Health, 1200 Attack and 106 Speed seems decent. Not amazing but there is definitely worse. Overall, for a first non-hybrid Legendary, it definitely looks good.

This creature looks a lot like the recently introduced Velosrhacos, although this one focuses more on Distraction and Evasion, with all of its attacks having one of the two side-effects. Overall this creature will not be the greatest creature, as its 2850 Health leaves it in range for a lot of creatures that have Resilient Strike and a Rampage. Its 1150 Attack stat also isn't the greatest, but at least it has plenty of multipliers in order to circumvent this. We will have to see how well this creature will do in the Arena and Tournaments.

Antarctovenator is a creature focusing on Distraction while still being able to deal with Armor and Shields. This gives it an Unique role in the game as not many other creatures do this as well as Nullifying the opponent. Although we will have to see how it does, as Revenge Instant Ferocity seems like a move that won't be as useful on this creature, as it doesn't have a proper damaging counter. It does have a good load of Resistances though, with some extremely useful ones like Distraction and Swap Prevention. It is of course too early to say how well this creature will do, so we are interested to see how it will fare in the Arena.

I just said that it was too early to say how well a creature will fare in the Arena, but not for this one. With a meager 2850 Health and 1000 Attack stat, this creature doesn't look good. It has no damage multipliers to circumvent this low Attack stat and the only useful things it has are Fearless Flap and 130 Speed, allowing it to outrun a lot of creatures. While this creature aptly disables Fierce creatures, if the opponent has any Resilient attack you might as well give up as this creature will very rarely survive the second hit. I might be wrong however, but I don't think I am. However, I will be interested to see how this creature will fare in the Arena or in the next Tournament.

Gorgotrebax finally gives us a Cunning Apex and it doesn't disappoint. With great Health and Attack and a plethora of amazing Resistances it definitely looks promising. The one thing holding it back is the 113 Speed, which is quite low for a Cunning creature. 4500 Health also allows it to be twoshot by both the Resilient Apexes, but against any Fierce creatures like Mortem Rex Gorgotrebax will fare very well. We're excited to finally have a Cunning Apex in the game after the two Resilient Apexes that were introduced.

Erlikogamma, Indominus Rex, Stygidaryx and Gorgotrebax are our new Raid Bosses. They will be introduced on these dates:

Now all Raid Days have FOUR Raids, meaning alliances will have a hard time completing all Raids without properly burning out. I do feel like Ludia will start rotating bosses now, especially the Raids that aren’t Apex Raids. As for the Raids themselves, they’re fine. Gorgotrebax will be the highlight here, and Indominus Rex is useful to farm it and its hybrids. Erlikogamma doesn’t have a hybrid yet so that one is useful too. Stygidaryx unfortunately isn’t the greatest creature around anymore, so that Raid will most likely be like Indoraptor – Beat it once or twice for fun, and then ignore it. Erlikogamma still doesn't have a hybrid so it is a useful Raid Boss to do as it will save you your Charlie and Erlikosaurus G2 DNA.

These are the new creatures that have been added and they are a mixed bag. The non-hybrids are great, but the hybrids could be better. What is your favourite new creature? Let us know in our Discord server! We hope to see you on there!