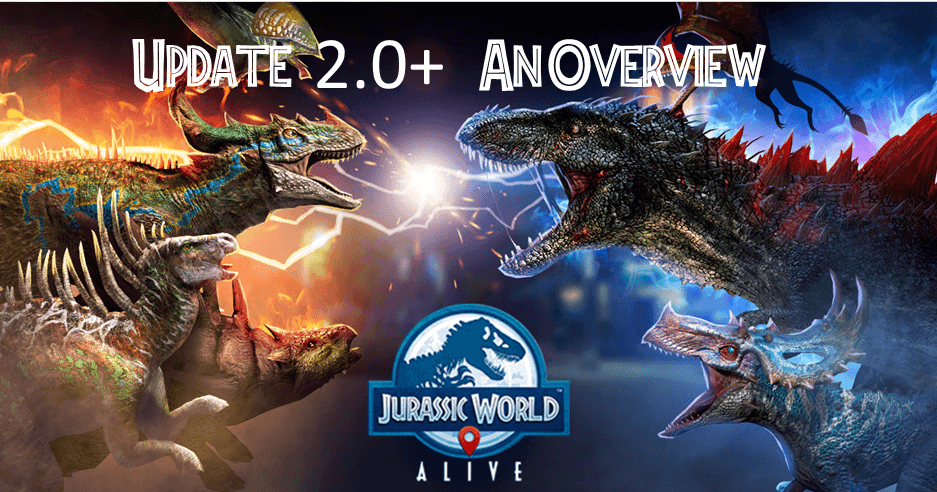 Now with those two things out of the way, we can get into the Update 2.0+ Coverage!

In light of the most recent patch ( 2.0), widespread issues affecting almost the entire player base have arisen within Jurassic World Alive. Ludia just recently put out an announcement on the forums stating that a minor update featuring Quality of Life improvements will be released to the community by next week. Some of these changes range from minor tweaks, to huge tweaks to improve the community’s gameplay experience, which will be certain to affect the state of the game. With that being said, some of these changes may actually cause more harm than good than originally anticipated, and without a further ado let’s jump right into why.

What was said on the Forums

As the trophy distribution & matchmaking currently stands, matchmaking currently puts you against players with higher team strengths than you (most of the time) which overall determines how many trophies you gain or lose depending on how the match goes. If you lose against someone stronger than you, they only win 20 and you lose a whopping 40 points because they’re technically supposed to be beating you due to their team strength. This ultimately makes it not only harder for you climb up in arenas but also harder for your opponent as they can't rise to a good matchmaking range quick enough. To add on to that, the same issue would apply if it were the other way around. Currently you can win against someone with better team strength than you and still only win 20+ trophies while they lose 40. Ideally you should be getting a bonus for beating opponents stronger than you, and your opponent should only be losing roughly 20 trophies if they had a stronger team than you, not gaining/losing the same amount of trophies as your opponent regardless if you won or lost that match, you’ll probably be losing more than winning so it actually isn’t much to anyone’s benefit that trophy distribution is equal now.

As for the Mortem Rex DNA distribution, this distribution method would’ve been perfectly fine IF it were implemented at the very beginning of the introduction of raids. This came about way too late in 2.0 and frankly is more of a let down than anything, considering those who haven’t won the lottery prize of anything over 10 Mortem Rex DNA are now never going to catch up to those select few players that got a lucky number. We firmly believe that everyone who has only obtained 10 Mortem Rex DNA every Mortem Rex raid battle so far has every right to be upset about this change. The starting distribution for a high level player has been increased from 10 to 15, and you can only obtain a maximum of 30 Mortem Rex DNA, on the bright side at least everyone will have higher chances to obtain the maximum DNA from said raid.

What still needs to change

Every single PVP seasonal reset is so bad because we’re all stuck having to deal with players from Nublar Shores dropping down to Gyrosphere depot, Gyro players dropping to Library, and so on and so forth. I’m honestly unsure if this issue has at least once been addressed but something needs to be done about this ASAP because this has been happening for far too long. Another issue I wanted to tackle that needs to be handled is the fact that since patch 2.0, top players have reported that they’ve been getting very little matches and often in most cases are even unable to fight against AI. Unfortunately this has led to two best players in the game to leave (IDGT902 and Practicekat) with many other top players on the verge of quitting, these players will go unforgotten and remain in the hearts of many. Finally, the last change that needs to take place is the rebalancing of Ardentismaxima, and Trykosaurus. These creatures are the most game changing, and it’s just ridiculous that these two can determine whether or not you win just by their presence in a match, especially if you don’t draw counters (of which there are currently only two reliable counters available to everyone at the moment, Mortem Rex isn’t an optional counter at the moment for most).

Overall I’m pretty sure Ludia is trying their hardest here to take as much feedback from the community to try and better their own game for the community’s entertainment, so while some of these changes may not seem as great as we’d thought they’d be we should still give them and Ludia a chance. For all we know this could possibly change for the better in future patches. What do you think of these changes? Let us know on Discord!