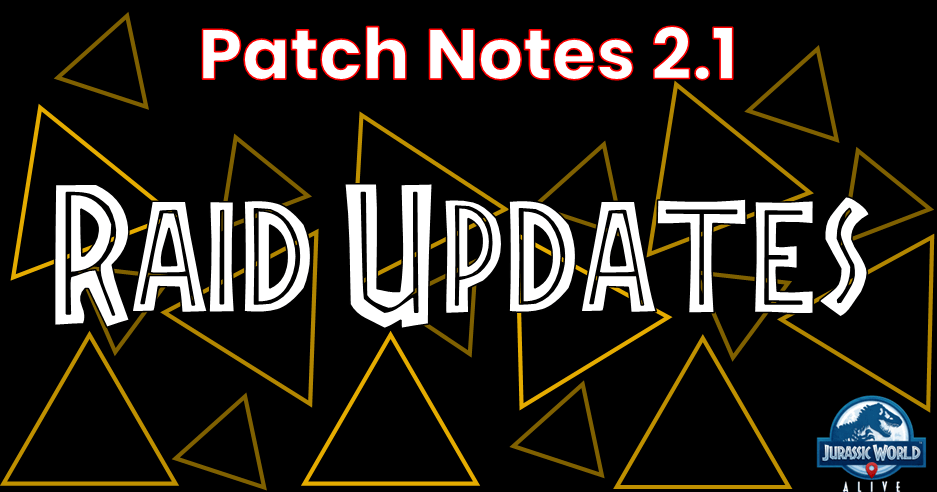 This article will focus on Updates to Raids. This fantastic new feature was introduced in 2.0 and they have included more creatures as well as some new features that should make the Raid experience even better!

These new raid bosses were datamined a little while ago, but it looks like they are being added to the current schedule instead of replacing the current creatures. In addition to what we have now, we are going to see 4 more Raid Bosses: Grypolyth, Pyrritator, Tyrannosaurus Rex and Hadros Lux (another Apex!). They are updating the schedule to include 2 raids per week. 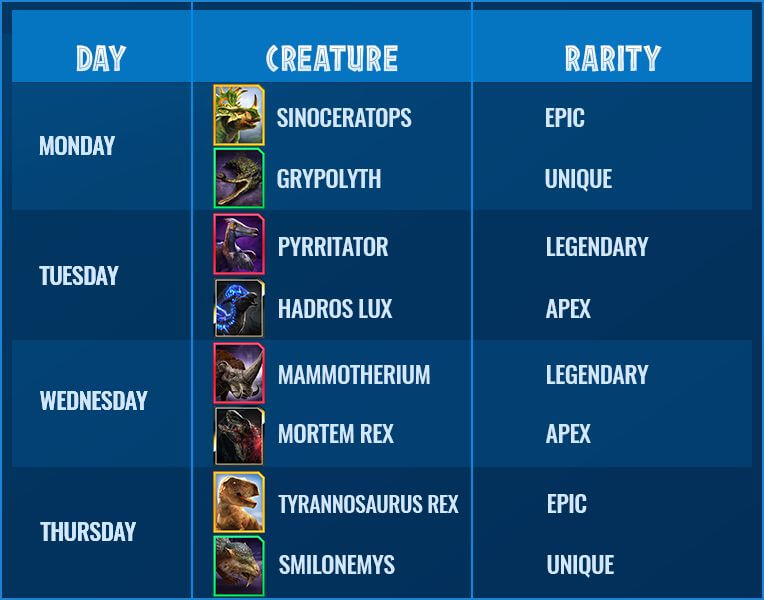 They won't be introducing all of the new creatures all at once, but will be rolling them out one per week for the next 4 weeks. Here is the schedule:

While we are excited about seeing more creatures, we are already tired thinking about another day of Apex raids. Wednesdays are alreay tough for many alliances trying to get everyone through it, and Tuesday is going to be very similar now. We are excited to try out new strategies and see what will work best against these new bosses. We'll try and get guides out as soon as possible so keep an eye out for those!

In addition to new Raid Bosses, we are also getting some Raid Improvements they we are pretty excited about. These features will hopefully improve the Raid Experience and the time spent trying to defeat them.

The Boss’ tooltip now shows this round’s and its maximum HP. The top HP bar displays this round’s HP total. This is really helpful when trying to figure out strats and how close you are to defeating it. That way you can know if you need to save a big hit or not. We also hope being able to click and see the boss stats is fixed as well.

Players can opt to abandon a match, resulting in an automatic defeat.

This is a very exciting feature. Nothing like starting a raid, having RNG go completely against you and not being able to get out of it. This option will let a player choose to abort the match. If a majority of the players agree to abort, the raid will end, resulting in a loss.

● The voting lasts for a short duration.

● The vote passes as long as the majority of voting players accept.

● The initiator of the vote automatically votes yes.

● If the vote fails, the initiator of the vote has a short cooldown of 60 seconds (to avoid spamming votes all the time).

● Only those who cast a vote will count (in order to determine a majority).

Examples :
● One player votes to abort the match. That player automatically votes yes. One other player votes yes, while two others vote no. 50/50 means that the "yes" did not win a majority, so the match continues.

● One player votes to abort the match. That player automatically votes yes. Nobody else casts a vote. At the end of the timer, 100% of voters wanted the match to end, so the match ended.

When a match ends in a defeat, you can tap either "quit" or "retry". If you tap retry, all players who tapped retry within the time limit will come back to the same lobby at the same original geolocalized position as the raid that just ended. This alleviates the need to find a raid boss on the map, start a lobby, invite and accept.

● The retry option can be selected as long as you can find and launch the raid boss .

If you replay a raid in which you have already participated:

● You can tap the sign and the last selected creature for that raid will be auto-selected (as
long as the creature restrictions have not changed since the last time you played that raid).

This is another exciting feature and should hopefully help with time in raids. It seems like most of the time we spend is creating a lobby and inviting players. When friend's lists aren't working that can take time. This new feature will allow lobbies to be refilled quickly so we can move on to the next match.

You can now invite any friend or alliance mate to join you in your Raid even if they are offline! Offline players will receive a push notification on their device that will alert them to join you in a raid. You will need to make sure you have activated notifications in your device settings to receive Raid invites while offline. Should you no longer want to receive Raid invite notifications, you can simply disable them in the game's Settings.To avoid spamming, the game will only send a notification to your friends' phone once per 30 minute period. You can still invite them more frequently than that, but the game won't send additional notifications on their device during this period if they are not in the game. They can open the game and see the invite banner while on the Map or in their friend list.

If you don't like getting a ton of Raid invites, make sure to turn the notifications off with this feature. It is nice to be able to invite someone and alert them you would like to raid, but I can also see how this could get annoying quickly. Use this feature wisely as to not spam your fellow players!

I think Raids was one of the best features to come in 2.0, but as with any feature, there is always room for improvement. It looks like Ludia tried to address some of these issues and we are pretty excited about them. Especially the new bosses and the ability to forfeit. Now, we just need a lobby chat feature so we can coordinate teams before going in. Maybe we'll see that in the next update. Meanwhile, make sure to join our discord for all the discussion about Patch 2.1!