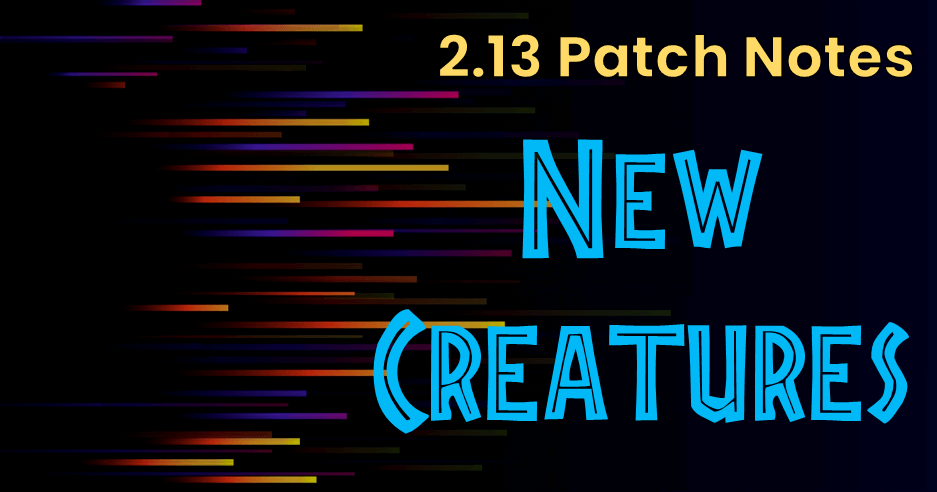 Explorers! Patch Notes for Update 2.13 are here and as always, we have all the coverage on everything. This update does not have a special name, but that doesn’t mean there’s nothing special about it. We have the info on that as well as other new features summed up for you here. This is what we have to look forward to this update.

This article will focus on the New Creatures! We’ve got 5 of them, including one new fusable Apex! They sure seem like powerful creatures ability-wise, so let’s jump straight in!

Fukuisaurus is the next Rare Hadrosaur to be introduced in JWA. Its main gimmick is that it can deal Group Resilient damage and can heal the lowest health teammate while also speeding them up, all while being powered up by its Persistent Counter. This might be the first non-hybrid Hadrosaur aside from Hadros Lux to actually have a use in the Arena, as long as its stats and resistances are all right. However, your main use for Fukuisaurus will be for the following creature:

Finally, Europe gets its own Continental hybrid. Fukuimimus offers a mixture of Cunning group damage with Healing and Cleansing, all while buffing itself with its Persistent Counter. It even has swapping utility thanks to Swap in Distraction, meaning that this creature might do pretty well in the Arena if all the stats are good! It can be a good support in Raids as well due to the Group damage and the two Healing moves, so be sure to give this creature a shot over your regularly scheduled Tuoramoloch and such!

This was to be expected, Ludia already did it once with Arctovasilas and now they did it with Albertospinos. A superhybrid got a new hybrid. Spinotasuchus is the first Legendary Superhybrid to get another hybrid, and this finally gives us the answer as to what Ludia classifies these kinds of creatures: as superhybrids. Albertospinos is our first pure Fierce Unique in an extremely long time, but we are worried about it. All moves except its basic attack of Lethal Defense Shattering Strike are locked behind a delay of 1, so its T1 options are absolutely atrocious. Albertospinos seems like it wants to do a number of things at once, having mobility options, locking opponents down with No Escape, wanting to bleed everyone, Shatter shields – While this definitely seems like a powerful kit after T1, we don’t know its stats. We are cautiously excited for Albertospinos, because its stats and resistances need to be very good to offset its atrocious T1.

And now we have another one! The Epic superhybrid Majundaboa is part of this Unique snake, paired with the Epic raptor Troodon! It seems Ludia has moved beyond the thought that Superhybrids can’t make any hybrids anymore, so this will make overleveling any creature even more dangerous. However, Troodoboa is here, and it seems like an improvement over Majundaboa for sure! It also breaks another “rule” that Ludia always held, as it doesn’t have any moves without a Cooldown! That’s right, all four of Troodoboa’s abilities have a Cooldown of at least 1, meaning you’ll not be able to just spam a basic attack anymore! Troodoboa is a true wildcard, able to buff its own damage, shield itself, slow the opponent down, Cleanse itself, and Distract the opponent, all while removing dodge and bypassing Armor with its Raking Counter. This is one versatile creature if I’ve ever seen one! Let’s hope the stats and resistances are any good as well, as this might be the answer to some very dangerous creatures currently running around!

JWA’s second fusable Apex gives us Ankylos Lux, a Resilient creature focused on mobility and a general improvement over Ankylomoloch, an already powerful Legendary. It has everything a tank would want ability-wise: Speed Control, Vulnerability, Shields, Resilience – it has everything it wants. Add some Stunning, Running, and Counterattacking to that mix and you have a creature that is sure to be one of the most powerful around in JWA. We don’t know anything about its Stats and Resistances, but considering it’s an Apex, I don’t doubt they’ll be anything but good. Ankylos Lux is also more easily fusable than Arctovasilas considering it only has one Event Exclusive component in Bumpy instead of two for Arctovasilas, so people might fuse this Apex more quickly than it! Be prepared to see Ankylos Lux wreak some havoc in the Arena!

And that’s that! All five new creatures in JWA Update 2.13! Which creature did you get excited about? What is your opinion on Superhybrids now getting Unique hybrids? Let us know on our Discord server, where we will be discussing the update very thoroughly! We hope to see you on there!