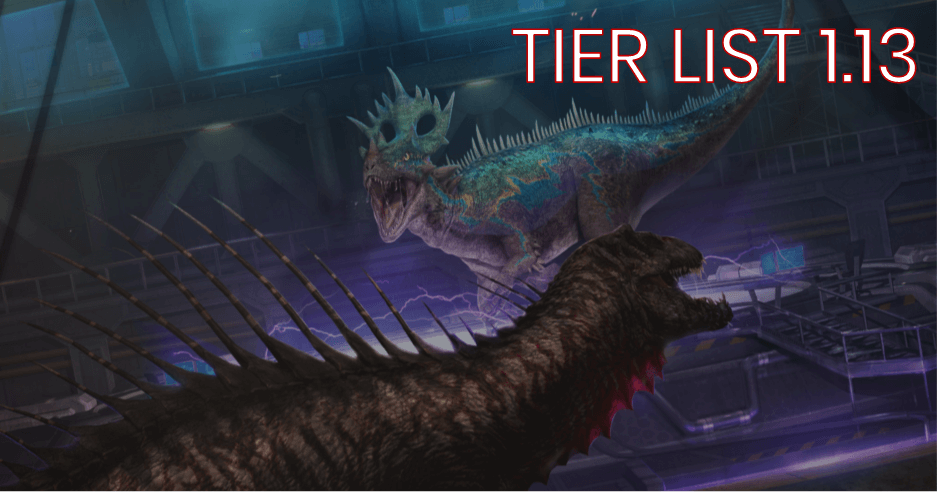 We are extremely excited to be done with Tier List 1.13! We think this a new record for us and we are extremely confident in the list we put together. This wasn't as difficult as last patch but as always we had our trouble maker creatures that caused much discussion. Before we share anything, however, we need to thank all those involved in the tier list!

From our GP Discord: DrSteveC and Hersh

From Apex Predators: Idgt902 and Practicekat

We truly wouldn't be able to do the tier list for the community without all of the people involved. We don't always 100% agree on everything (cough Yoshi cough), but we try to bring in a diverse group of people that will give the best analysis of the dinos and where they should fall. So let's get to it!

Since we voted on all creatures last patch, we only did initial votes on High Alpha and above this time. There were options for write-in creatures if someone felt something needed to be brought up that wasn't on the initial votes. As mentioned above, once we tallied all the votes, the creatures that had less than 65% majority were put on the contested list. We have 75% as the threshold for the Tyrant tier as we feel like that tier in particular needs a large majority of voters to agree on it.

The table below reflects the initial contested creatures and how they were voted. As you will see later, many ranks change dramatically after the initial votes.

As always, there were other creatures that came up early, often, and repeatedly. We won't go over all of the creatures that changed tiers, but a few of the most hotly contested ones were Ardentismaxima, Indoraptor Gen 2, Thorodolosaur (yes again), Procerathomimus, and Carbonemys.

Many of these discussions and determinations came during or after the Greater-Hybrid Tournament that took place this last weekend. That was the best way for us to see all of the creatures on equal footing in action and some of the flaws came out.

Maxima was a clear High Tyrant last patch, but the HP nerf it took this patch bumped it down to Low Tyrant in our opinion. It's still very much an end game creature but it loses a couple of more matchups that it didn't last patch. As with many of these creatures, boosts can really help make up for that nerf, but it's often even more set up fodder now and isn't the completely super overpowered creature on par with the other High Tyrants.

Many people believed last patch Indo2 was at the low end of High Tyrant. This patch it lost cleansing from Cautious Strike and we felt that was enough to bump it down to Low Tyrant. Just like Maxima, it is still absolutely an end game creature, but it doesn't feel like it's on the same page as the High Tyrant creatures. While the change allows Mutual Fury to be more effective, it not being able to cleanse, also allowed it to bleed easier or to be set up with a Bellow or slowing move from another creature before they die.

Sigh. It seems like we can't get away from this green monster. We almost made it through discussions without talking about it (no really we did). As you can see in the table above, it wasn't even on the original contested list and most people had comfortably voted it into High Apex. Then someone (who must not be named) brought up Alllosinosaurus on a veto. As with many of the veto discussions, Thor was brought up in comparison, and someone else (who also must not be named) officially vetoed Thor as well. This started yet another almost day-long discussion complete with charts and graphs from both sides. We also took the opportunity to see how it did in the Tournament and even those dead set on High Apex felt like it just "fell flat on its face" when compared at an equal level with most of the other High Apex creatures.

The votes weren't as close as last time as we had 8 people for High Apex and 13 people for Mid Apex. So once again, Thor gets dropped back down to Mid for this patch. As of right now, it is winning the award for most tier changes since it was introduced in the game.

Yoshi was actually a big surprise as one of the more hotly debated creatures. It was Low Tyrant last patch, but we felt like it was at the very low end of Low Tyrant. Those that thought it was High Apex could also agree it was on the very high end of High Apex. Ideally, we think Yoshi should have its own tier between Low Tyrant and High Apex, but we aren't making a whole tier for one creature so we had to decide where it was going to go. Cue another day of discussions complete with charts and graphs. As with Thor last patch, we ultimately let it go to the votes because we knew it would never get resolved otherwise. The votes were tied for quite a while, but a couple of people changed after facing it in the tournament, and it was ultimately placed in High Apex with 13 votes. Low Tyrant had 9 votes. Please note that we still think this is an incredibly strong creature and while we don't rank each tier, we can all agree that it is probably the strongest in High Apex.

Carbonemys was on the original contested list and it was barely voted into Low Apex with 11 votes compared to the 10 for High Alpha. Later, however, it was brought up again and the argument was made that the changes it incurred were significant enough to drop it down a tier. Once considered the king of epic tournaments, Carbo got a pretty significant health nerf this patch. That, along with the changes to superior vulnerability made it seem less threatening than it has been the last few patches. It can't survive as many hits and it doesn't deal out as much damage either so we ultimately decided High Alpha was more appropriate.

We plan on some future articles that discuss creatures that do well in a boosted environment. We will also be spending a good amount of time creating articles for how to counter the Tyrant tier dinosaurs by creating updated guides that incorporate the battle sim results (some of which are fascinating). And of course, we love hearing from the community (via discord or social media). We will be closing the Community Tier List votes and will have those published in the next week or so as well! 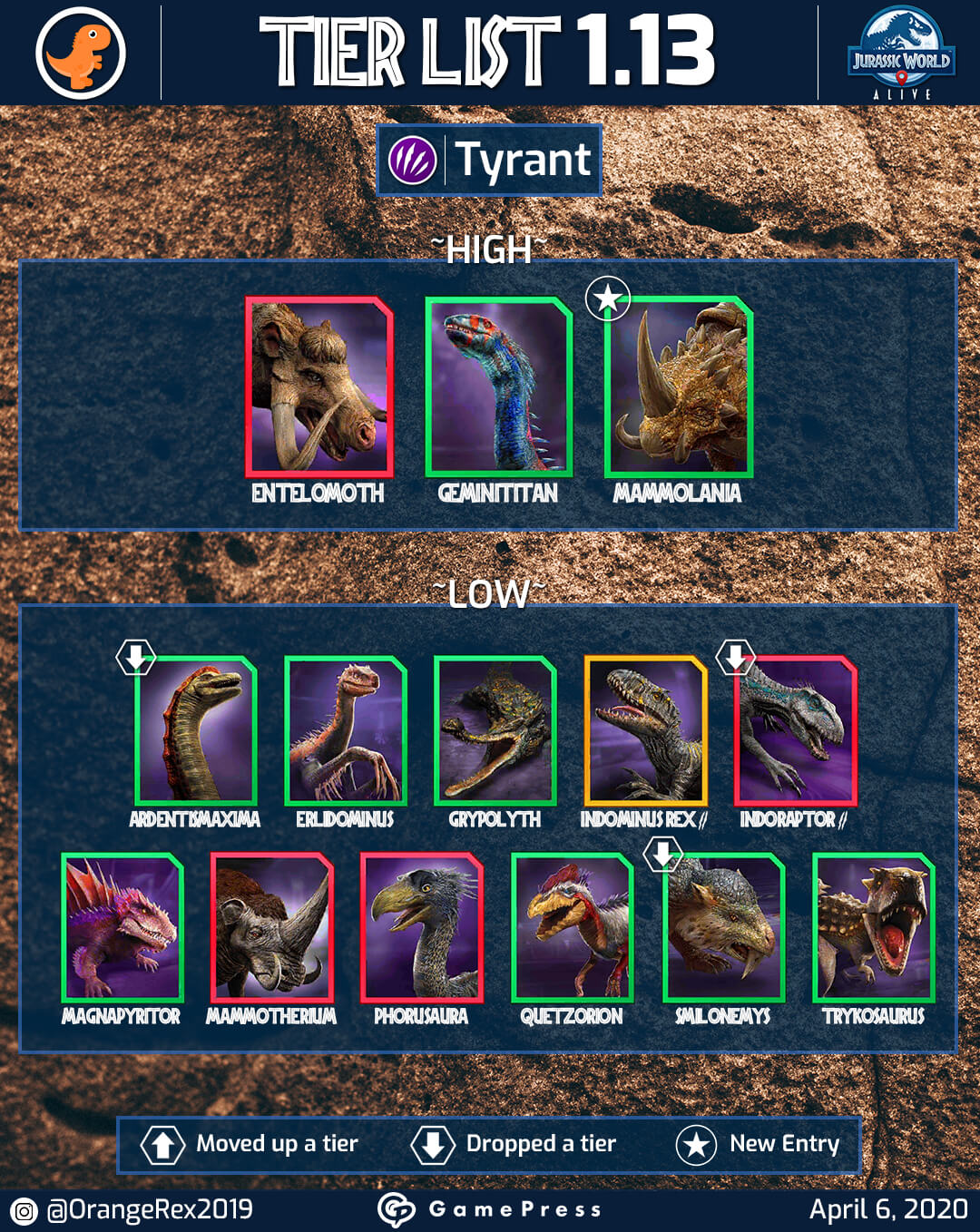 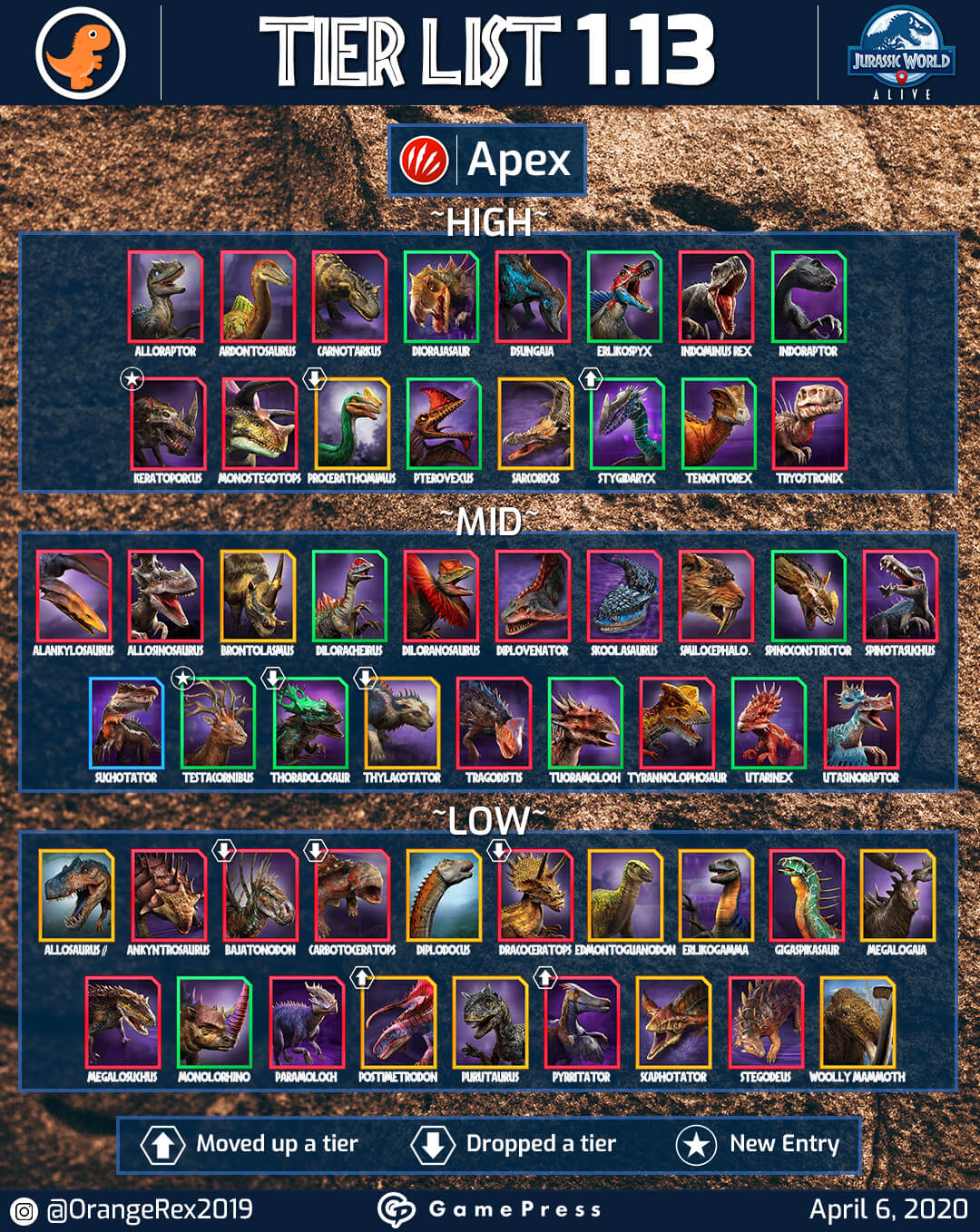 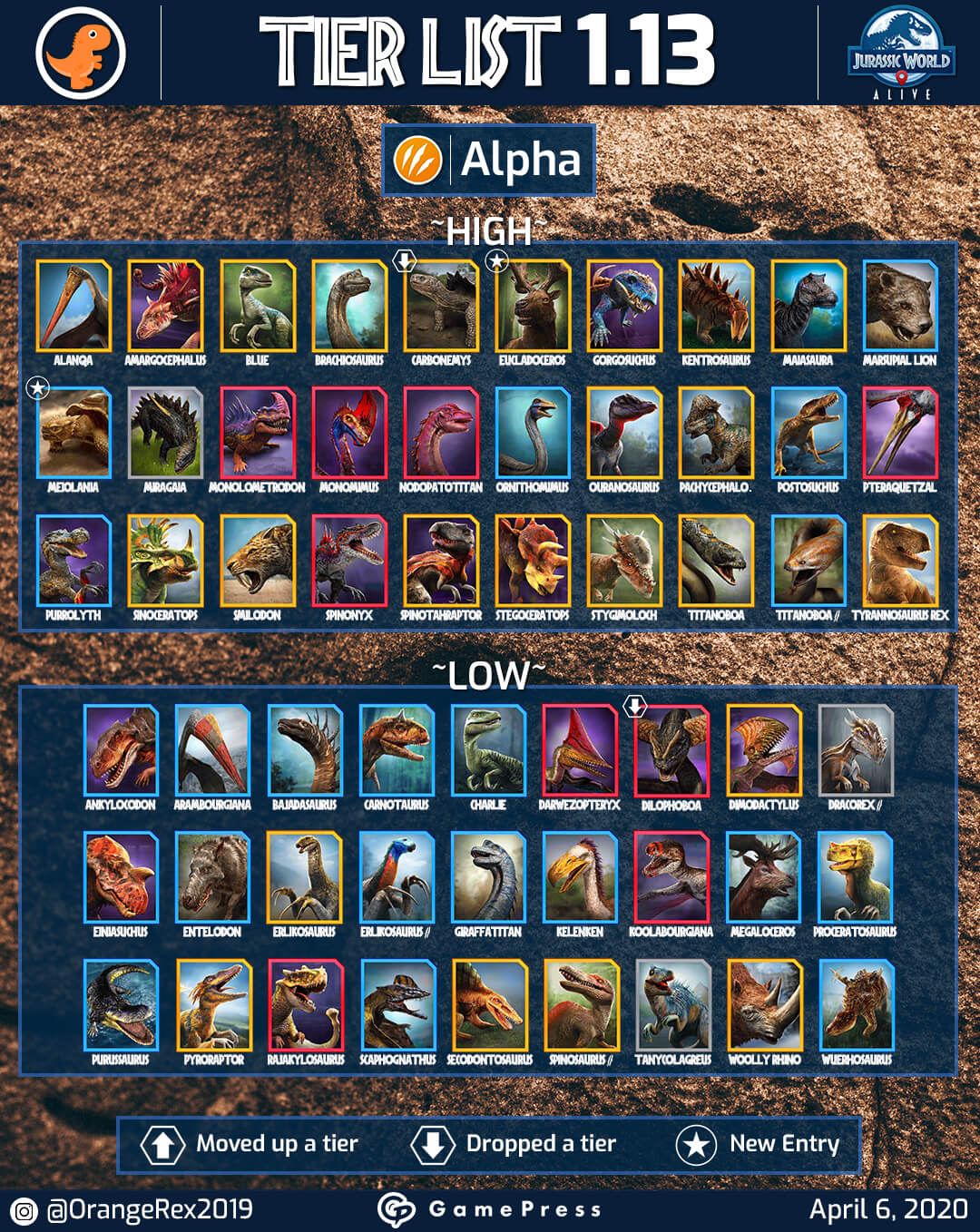 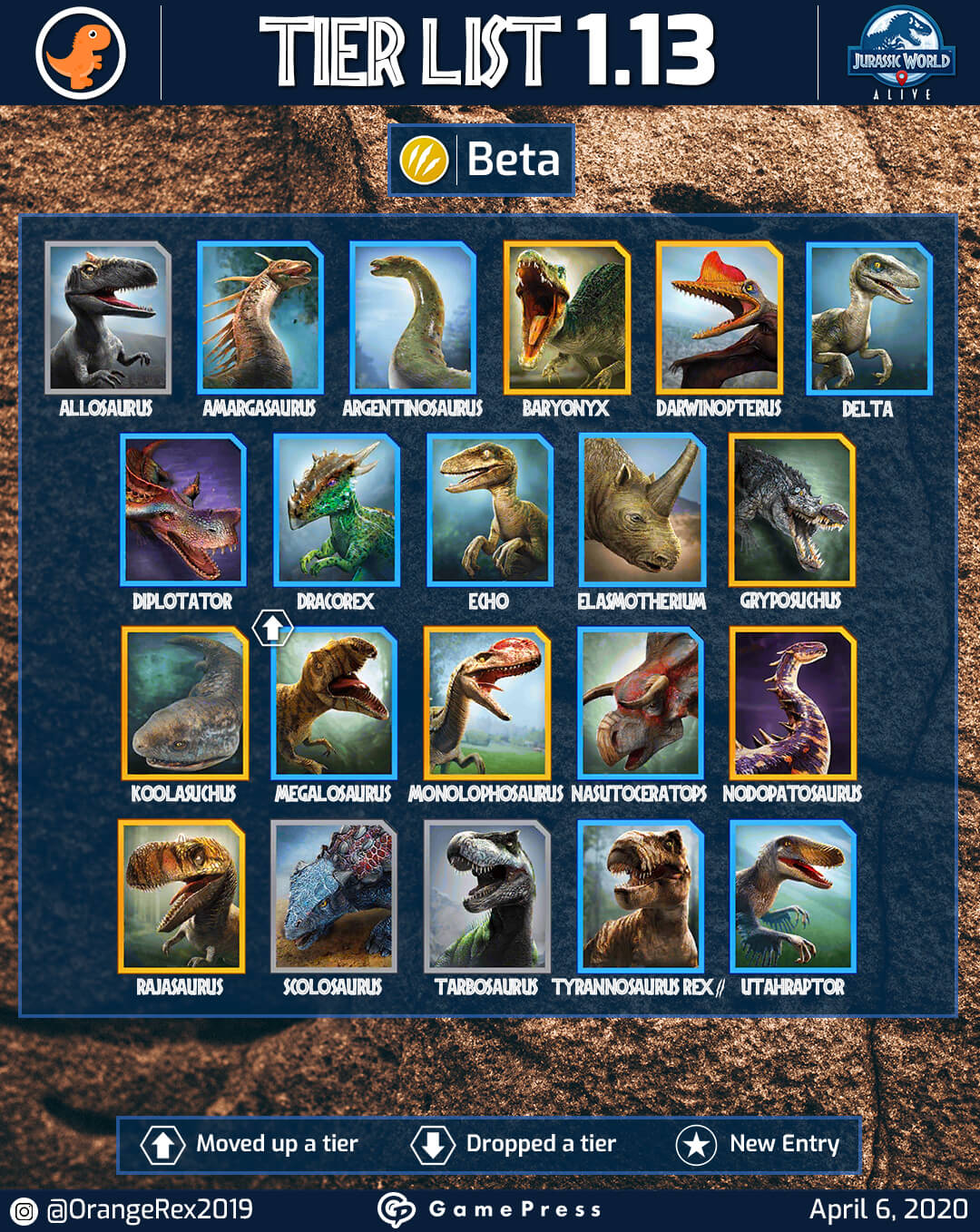 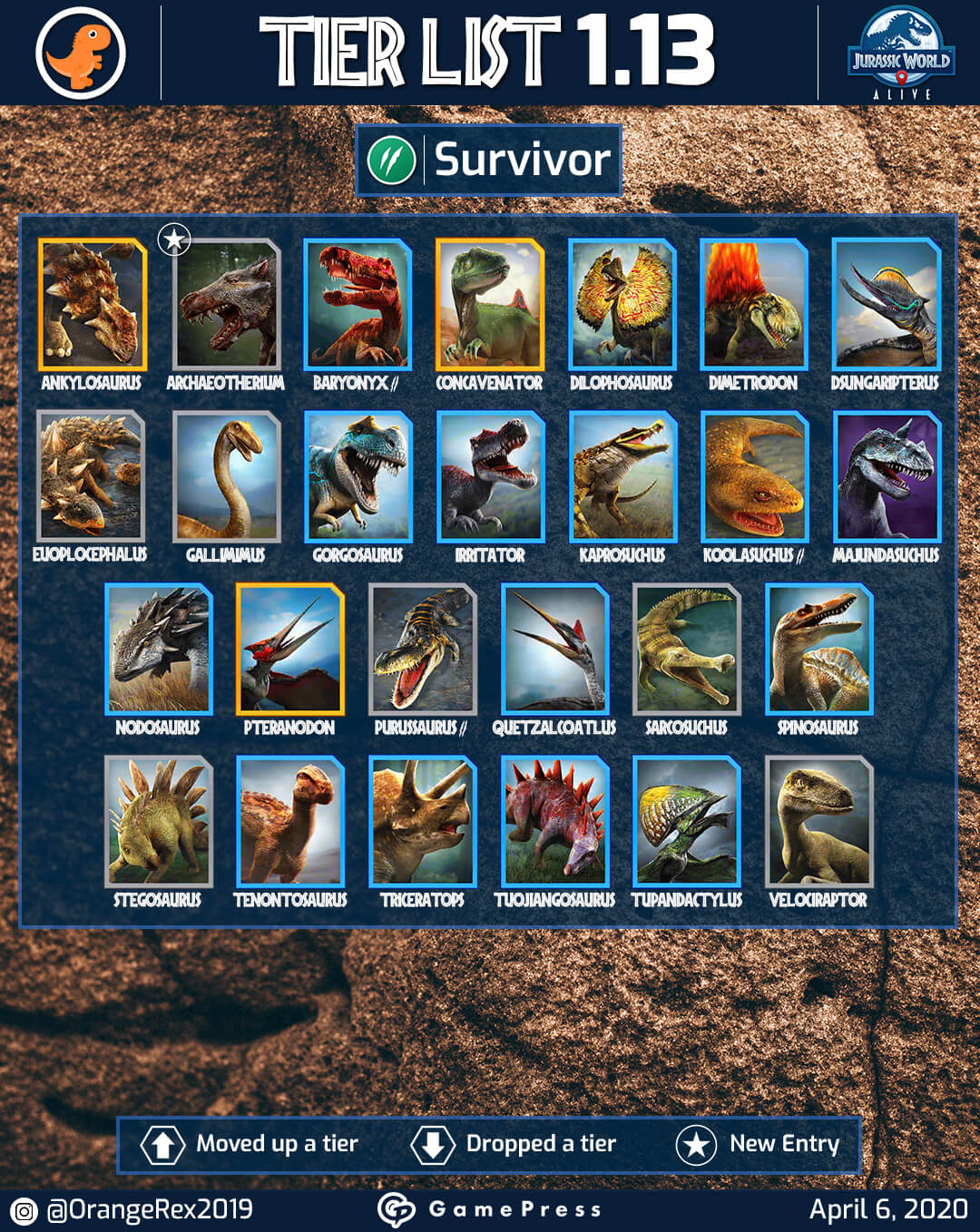 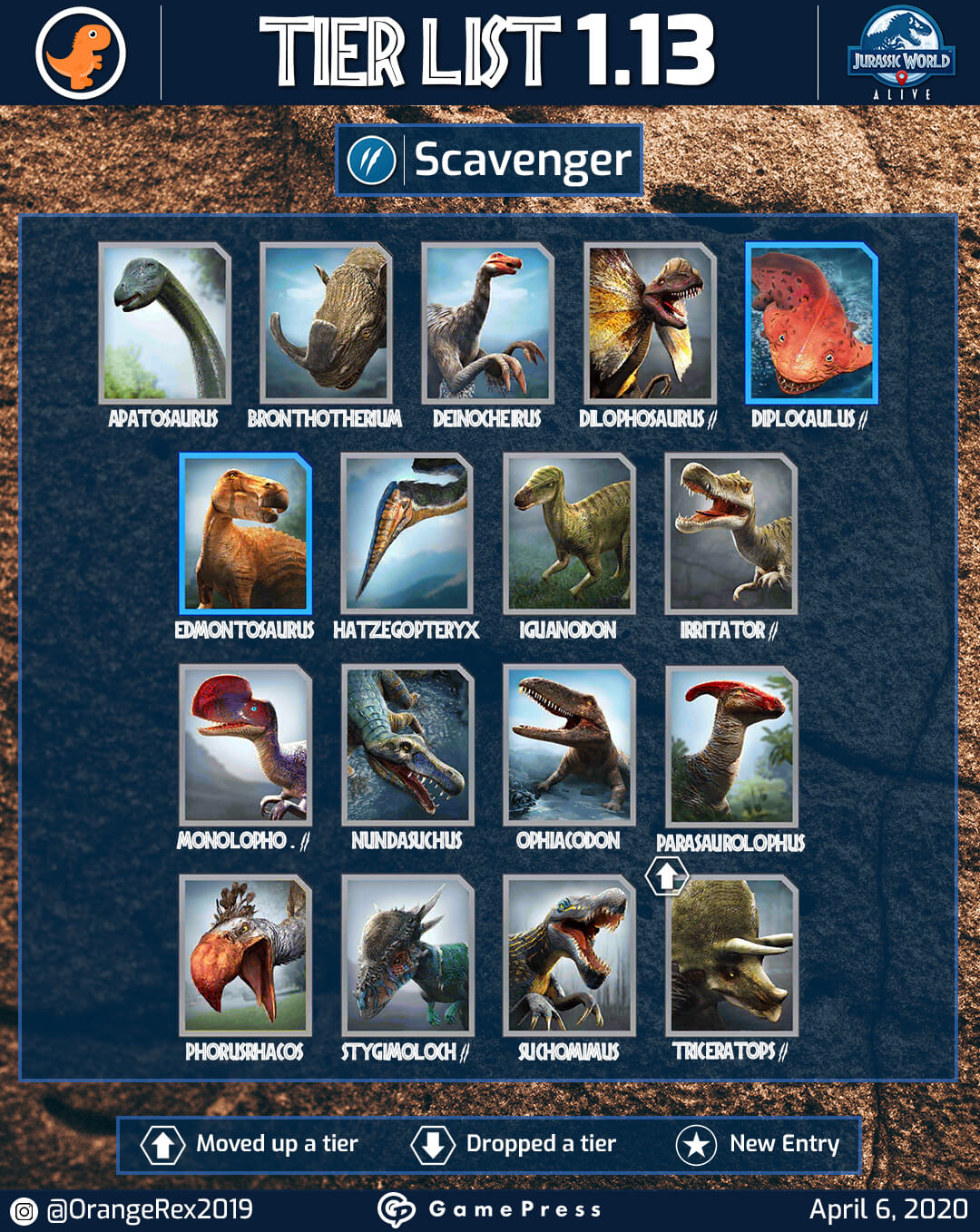 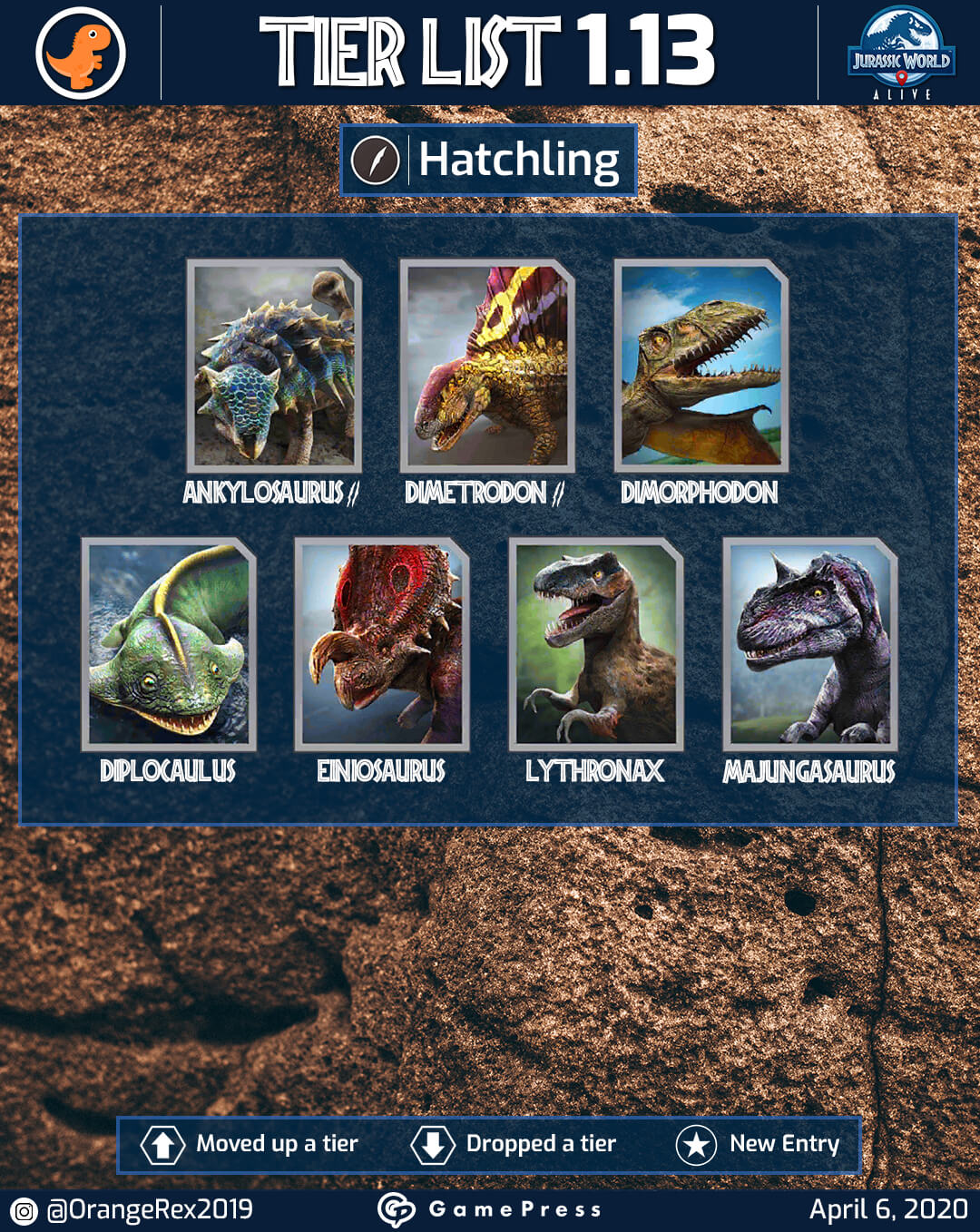