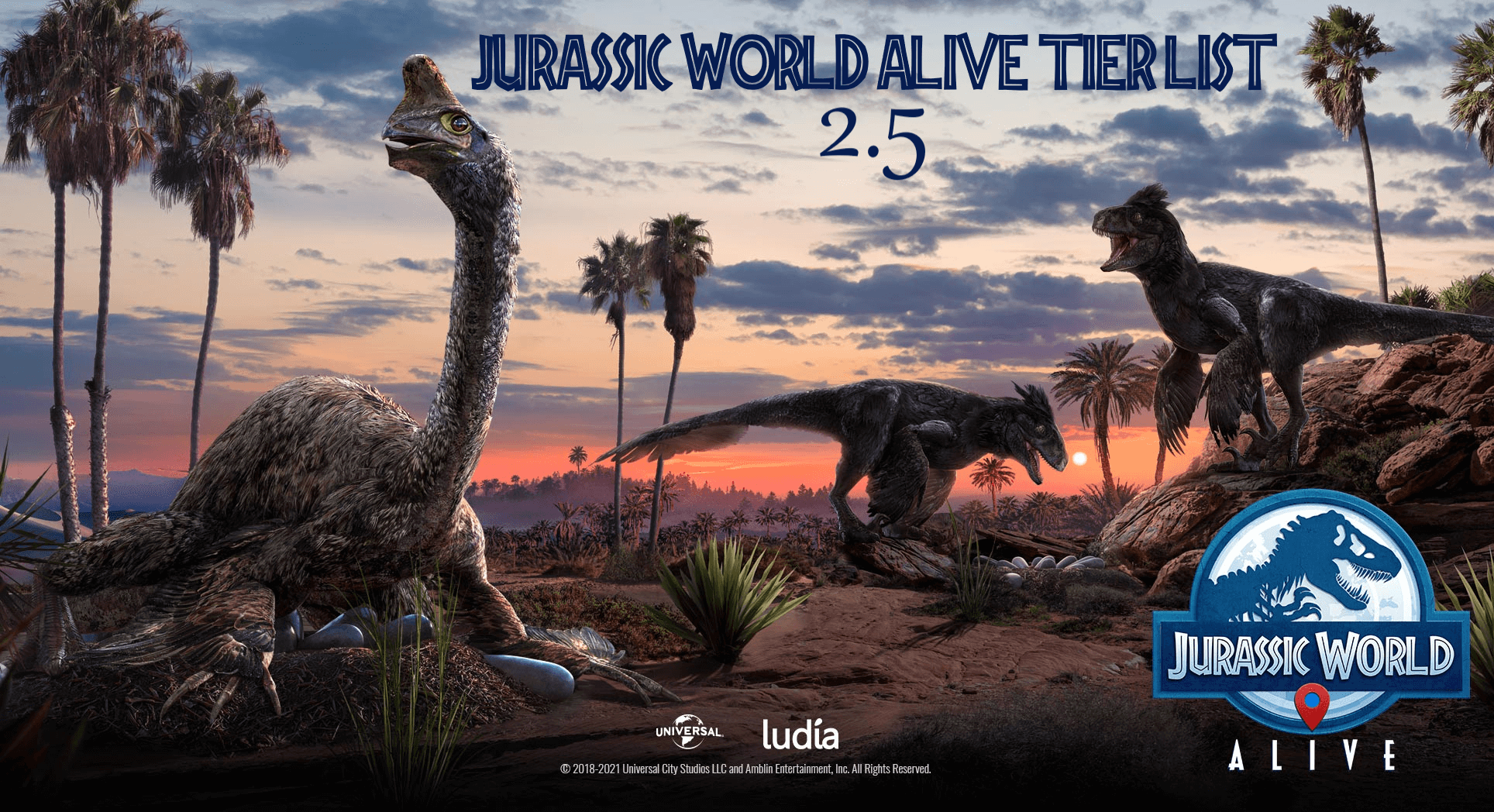 Just in time for Update 2.5, we've got the 2.4 Tier List ready for you! Ludia did release Update 2.5 Patch Notes right when we finished this Tier List, but much to our delight there were no new creatures or creature changes, meaning that this 2.4 Tier List is also perfectly serviceable for Update 2.5! We know many people look forward to these Tier Lists so we're happy to present you guys our official 2.4 and 2.5 Tier List. But before we do that, we want to thank the people that have participated in these discussions! Without their help this Tier List would not be possible.

A big thank you to all these people that voted and discussed on all creatures. Even though we did not always agree with everything, we did eventually manage to get our Tier List ready for you all.

Method to the madness

Many people want to know how the Tier List gets compiled so here is a look at our process:

First, we assemble a team (kind of like the Avengers) and send out a survey to see where people think a particular dino should fall. This survey is done prior to any sim results being released so the results are based on experience with the creatures in the arena and any friendly battles we do (and trust us, we do a lot!). Then we compile the results and if there is any dino that had less than 65% of the group agreeing on the Tier it goes on the "contested list". That's when the real fun begins. Imagine almost 30 people in a closed channel on discord trying to discuss where Thoradolodaur should be placed. Both sides of the argument make their case and we do one more vote to determine the ultimate placement. Everyone also has a veto where they can bring up a dino or appeal the placement of one already discussed. Often times, vetos lead to even more discussions of even more creatures so this process can take some time until we have reached a conclusion or just given up and left it to the power of democracy.

Some of the dinos on the list are only in that specific Tier because they lost or won by 1 vote so just because it isn't where you might think it should have been, doesn't mean there aren't other people that agree with you! We tried to make it as democratic as a process as possible.

Our Tier List is based on strictly even levels disregarding Boosts. This is an important piece of information because eventually you will hit lesser and lesser returns on your creatures with Boosts, and a Tier List can help you figure out what to keep working on and what you should have abandoned long ago because it hits a ceiling that makes it a liability. Our Tier List is meant to help you -- all things being equal -- find the very best creatures and hopefully the best investments for your boosts.

This also means rarity is not taken into consideration when discussing the Tier List. Spawns change. Arena Exclusives become not so exclusive. And now Sanctuaries even opens up a new world of possibilities for people to attain DNA that was previously impossible to get outside of featured dinosaurs or incubators.

Our Tier List is based on discussion and matchups. We run hundreds of friendly battles on our own, determining what is working and what isn't. We have a comprehensive combat simulator created by the JWA Field Guide that helps us see how every single creature stacks up against every single other creature and we run every 1v1 matchup 4000 times.

But this is not a simulation Tier List. If it were, we'd have it ready for you on patch day. This is a Tier List that wonderfully talented and intelligent individuals have discussed ad-nauseum to get to the bottom of each creature, using ALL information at our disposal (friendly battles, simulation results, our own arena experiences, etc).

So as always some creatures are discussed more than others. However in this Tier List we had less Contested Creatures than we thought, and one big absence was the one true Tier List terror in the past: Thoradolosaur. This time it fell into its Tier quite easily without much debate, which was something we were all happy about, seeing how heated the debates on it often got. However, there were some creatures that did receive a lot of discussion, and we will briefly go over them and highlight the main arguments.

The newest addition of the Apex rarity originally got voted into High Elite. The main arguments for this were that despite its amazing Resistances and movepool, it did not have that edge to get into Tyrant due to its Speed Tier of 113 and the (assumed) lack of a good Distracting move, as we originally thought that Cautious Impact worked similarly to Cautious Strike only applying one Turn of Distraction. However, we then looked into the code of the game and saw that it actualky was much better than we thought it was. Cautious Impact was revealed to apply TWO Turns of Distraction to its opponent, as well as all other effects lasting for two Turns instead of one. This instantly shot up Gorgotrebax to solidly be placed into Tyrant Tier, without much debate following that revelation.

One of the Uniques that was put in the game at the very start of its runtime, Magnapyritor finally felt the powercreep that was coming for it. While it has amazing moves and great Resistances, it unfortunately suffers from the meta that is around it. With 3900 Health, it is very prone to a swap-in from creatures like Monolorhino and Ceramagnus, two creatures that make the meta much more in favour of swapping. Magnapyritor is a great 1v1 player, but seeing as the meta is slowly turning into a swapping meta again, Magnapyritor takes a hit in viability, hence the decision to drop it to High Elite. But do not think that Magnapyritor is a bad creature now - it still is able to battle with the best creatures around it and is on the fence of Tyrant. It just suffers from the fact that the meta around it becomes worse for it.

If you want to talk about the swapping meta, here's a creature that can punish it. Testacornibus was initially voted down to Mid Elite thanks to the fact that its 1v1 matchups were not the greatest. Superior Vulnerability, Devastation and Resilient Impact are good, but you are not going to KO a lot of creatures before they KO you. However, if you allow Testacornibus to be set up, the combination of those moves will severely dent anything in its way, even Fierce creatures. Its 127 Speed and amazing Resistances are key to this. It also severely punishes swapping into it with On Escape Heal and Ceramagnus and Monolorhino won't be able to Stun it due to its 100% Stun Resistance. Testacornibus will even beat these creatures if they swap in on it thanks to its many Healing abilities and high damage output thanks to Superior Vulnerability and Devastation. Because it punishes swappers quite badly in a meta that becomes more and more swap-oriented, Testacornibus remained in High Elite.

Honestly, those three were the biggest debates in the discussions. This round of the Tier List it all went relatively smoothly, something we're not always used to! However, there were some other creatures that were discussed a bit, and we'll quickly highlight the main arguments for them.

Majundaboa: This snake got brought up with same reasoning as Testacornibus with the fact that it can punish swapping quite badly. However, a combination of poor matchups and the reliance on predicting the opponent kept this creature in Low Alpha.

Woolly Rhino: This Epic Rhino got moved up from Low Elite to Mid Elite thanks to the meta evolving to a swapping meta. Woolly Rhino has been a staple on many Epic Tournament teams for a good reason thanks to its high damage output and good bulk, and this was also why it moved up to Mid Elite.

Velosrhacos: Thanks to its Health increase, this bird got to move up to Low Elite thanks to its high damage output with back-to-back Rampages.

Parasaurolophus Lux: This creature is more of a Raider than a PvP-er, but still has some potential for weaker teams due to Resilient Rampage and good Healing abilities. Putting it next to other Hadrosaurs like Bajatonodon and Edmontoguanodon felt natural, hence its placement.

Mammotherium: Mammotherium got moved up to High Elite thanks to its big damage output and great set-up potential. Are you about to die? Bellow and get that opponent Slowed, or dish out major damage with Persistent Ferocious Strike and Resilient Impact. Dig In paired with Persistent Ferocious Strike also allows for a priority Shield and 2250 Heal, something it definitely likes to have.

So what do you do with this Tier List?

This Tier List is a general guide to what creatures are best to work on for the endgame. However,  just because a creature is in a low Tier or if it has dropped a Tier doesn't mean that it isn't good for you to use! Magnapyritor for example dropped a Tier, but we still consider it one of the best 1v1 creatures around! Also keep in mind that Boosts do change up creatures significantly. So use this Tier List as a guide, but not an end-all chart of what to do.

We're still working on updating the Tier List on the GP Website. But for now you will see the full Tier List in the images down below. What do you think of the Tier List placements? Do you (dis)agree with us on a creature's placement? Let us know on our Discord to chat more! 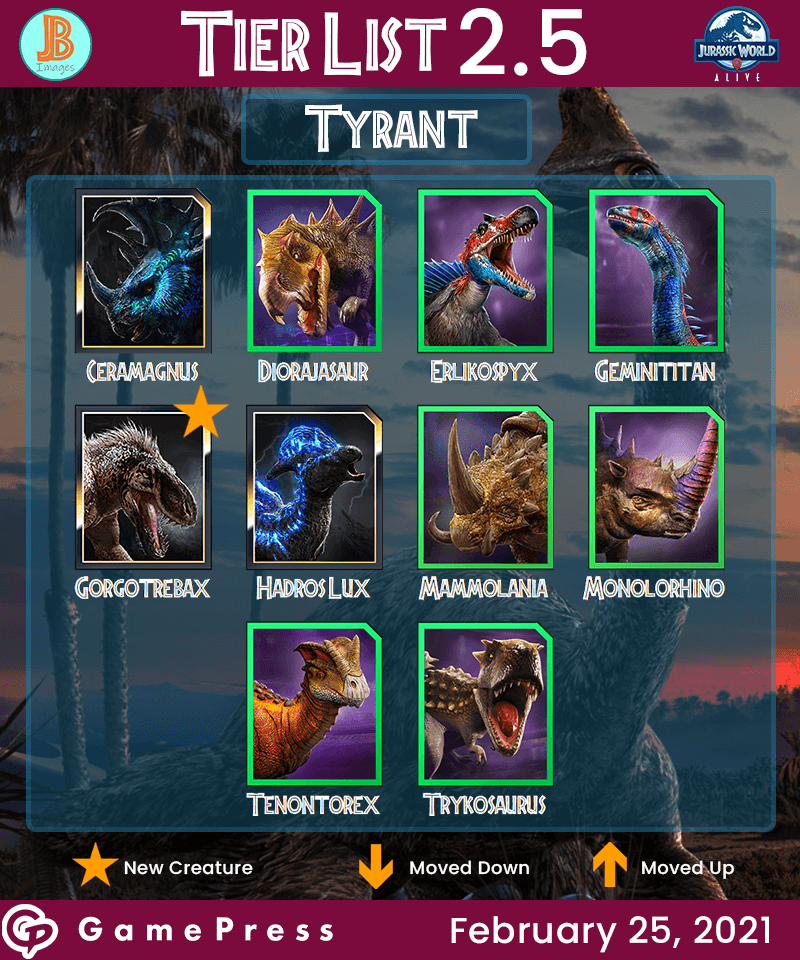 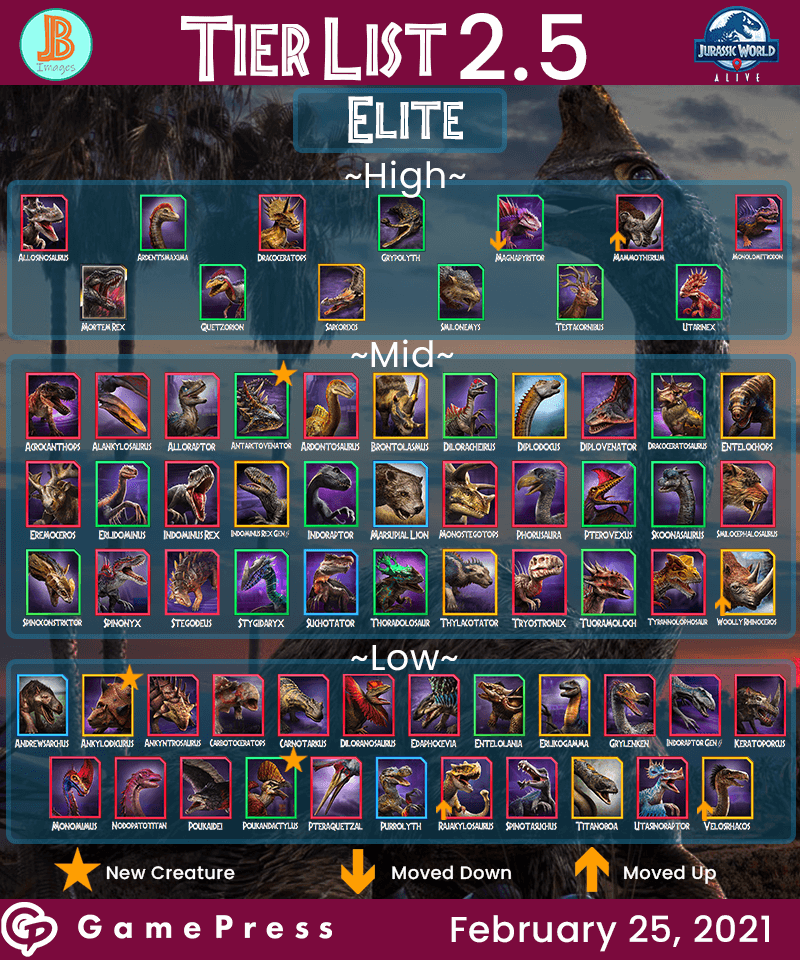 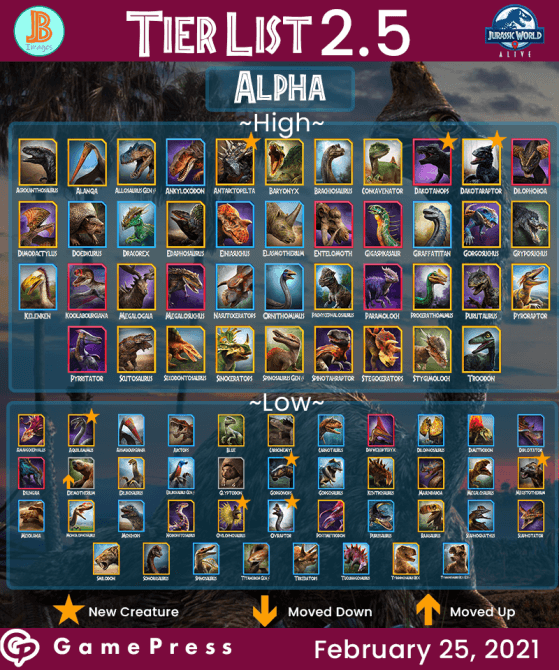 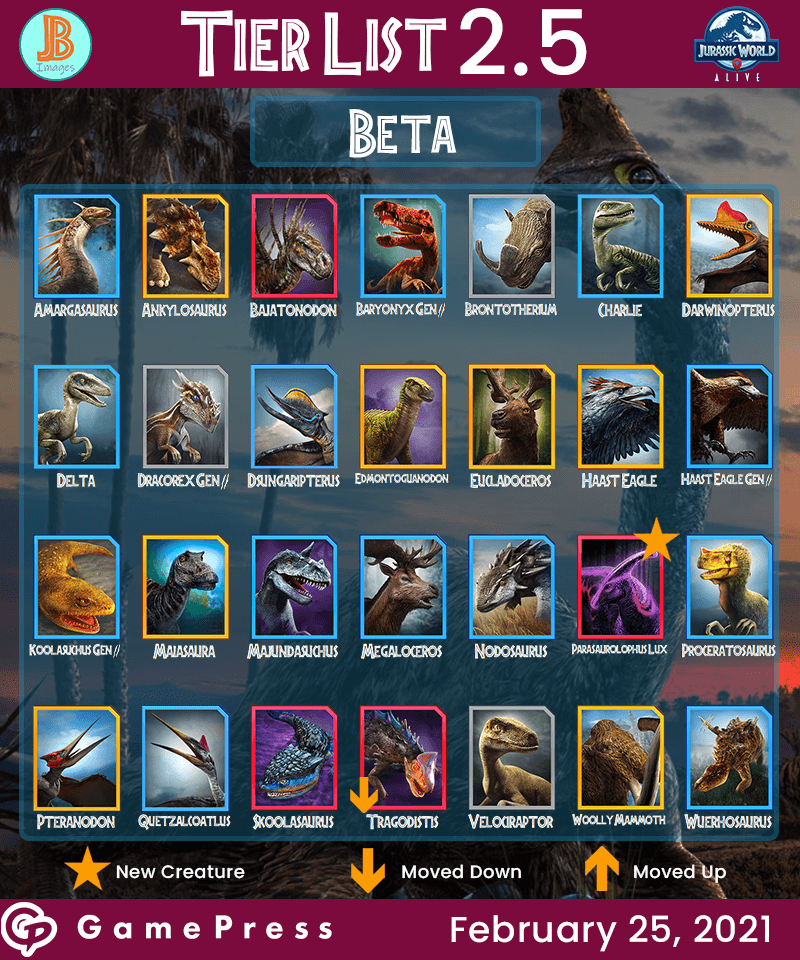 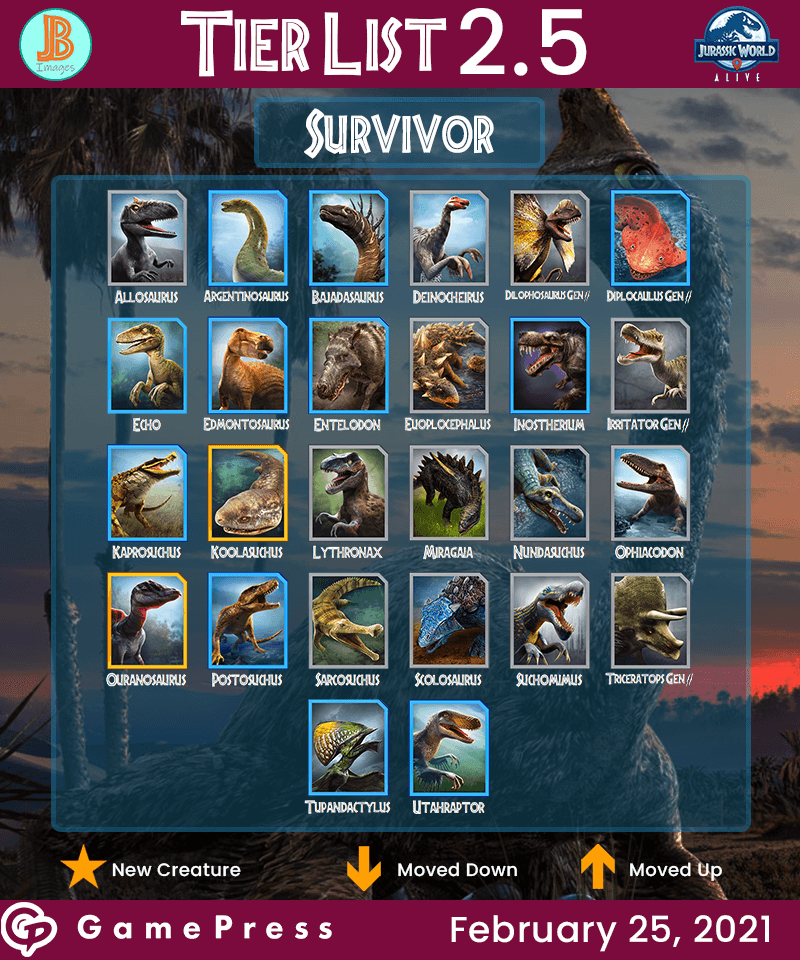 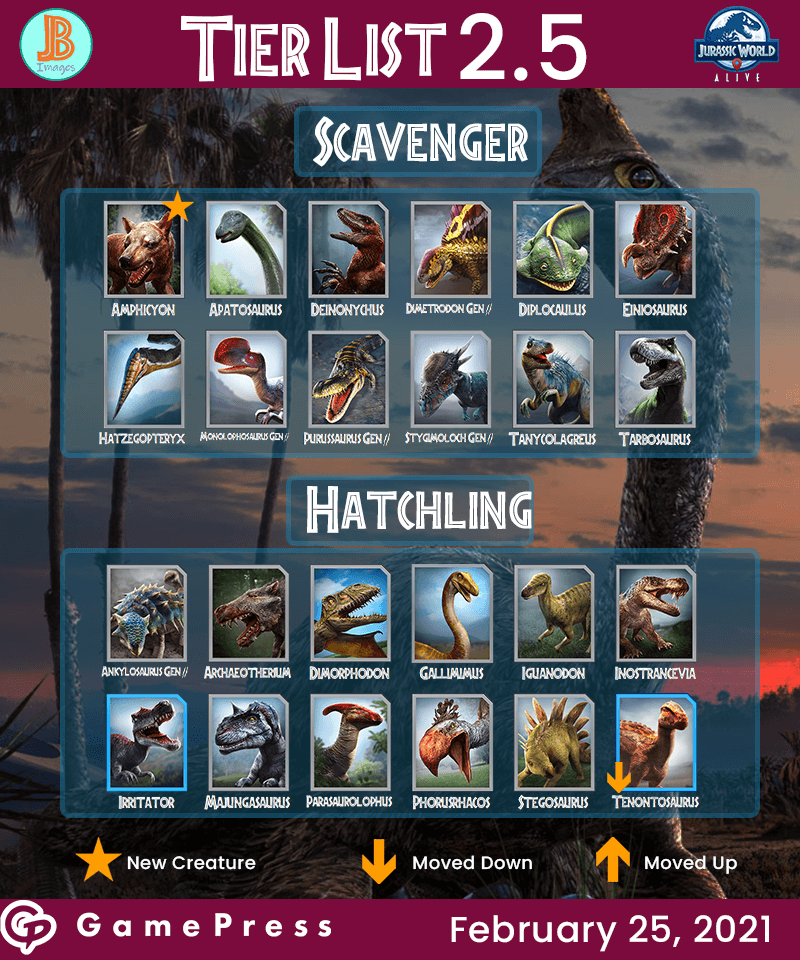