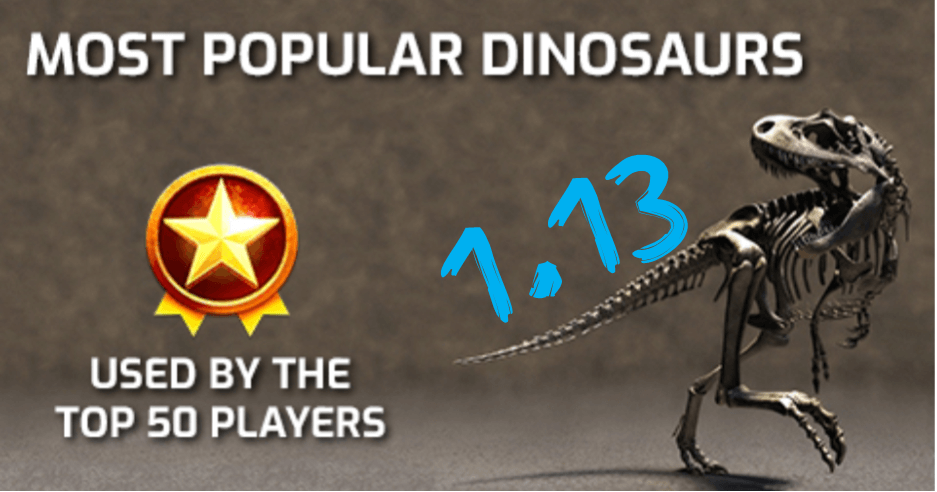 Hello Explorers! Last season we did a breakdown of all of the creatures used by the top 50 players. We decided to continue with that every season so we can document changes. Huge shout out to our discord member KillerT77 for helping compile this information and assist with the writing of this article! If you want a refresher of what the top 50 used last season, check out the article below. So what creatures are most used amongst the elite of JWA? Let's take a look.

Below is a breakdown of all the creatures that are used by the top teams. The number next to the creature represents the number of players that have that creature on their team. This information was collected on April 15, 2020 so there could be some minor changes to the numbers currently. Once again, huge shout out to our artist OrangeRex for creating this image! 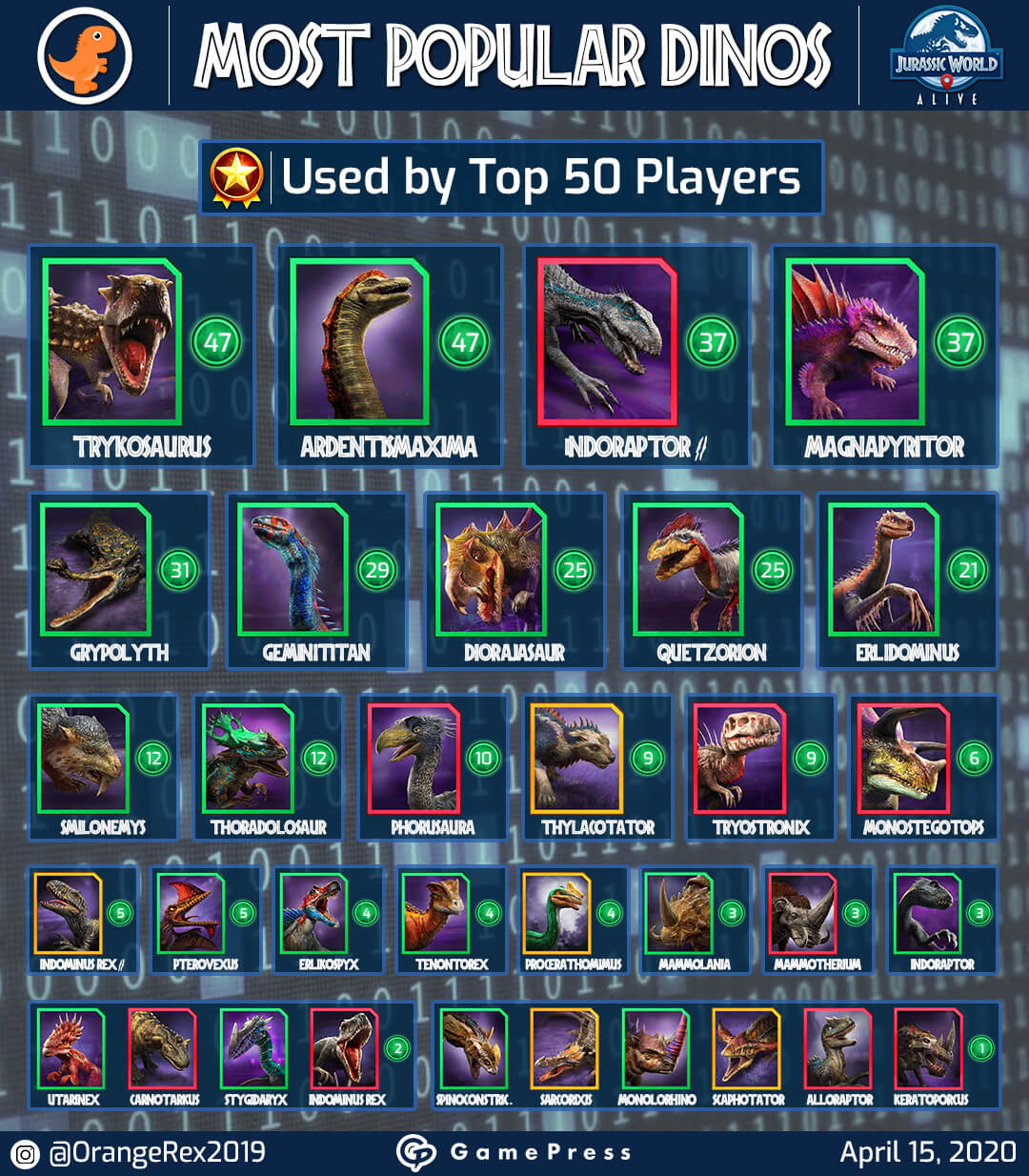 There were some pretty significant changes from 1.12 to 1.13 with some creatures. Most notably the increase in Geminitan and the decrease in Thor. Here are the statistics side by side for comparison. 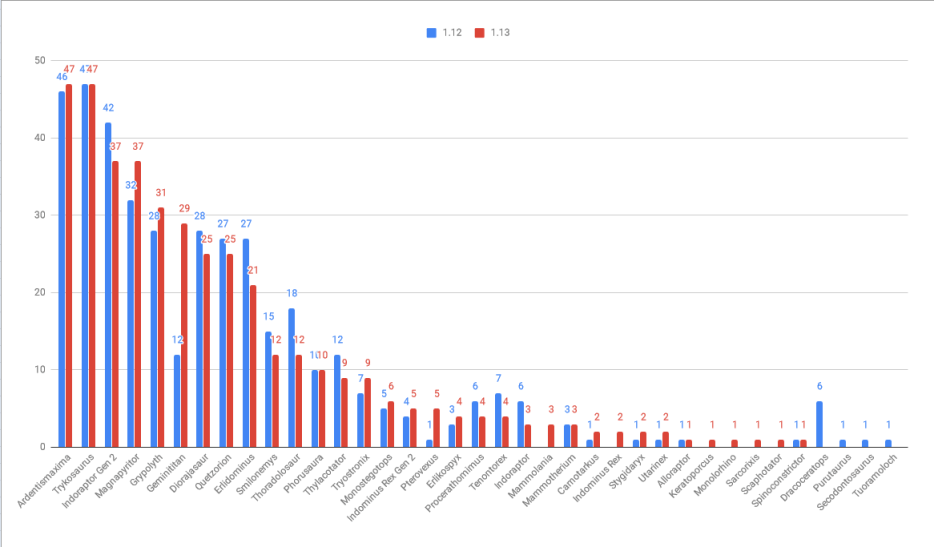 Just like last season, at least half of the teams are using the top 8 dinos: Trykosaurus, Ardentismaxima, Indoraptor Gen 2, Magnapyritor, Grypolyth, Geminititan, Diorajasaur, and Quetzorion. There is a slight change to the top 8 from last time as Geminitan came in and edged Erlidominus out of a top spot. We already broke down the other creatures in last seasons' article and not much has changed to those creatures. Quetzorion did get an attack nerf this patch but it still seems to do well in the arena and it was only dropped from a couple of teams. Trykosaurus is still being used by most of the top 50 once again solidifying its spot as Old Reliable.

Geminititan is much more prevalent now this patch. It went from being used on 12 of the teams to 29 teams, putting it solidly at the top. That's a 141% increase! The Diplodocus events we recently had probably helped with the building of this very hard to level creature allowing them to get it to team level. Remember that most of the top 50 teams usually need a creature to be an average level of 27 or 28 before they are able to put it on the team. Geminititan was so incredibly powerful the last patch that many also thought it would get some sort of nerf in 1.13 (and let's be honest everything else pretty much did). But Gemini survived the nerf hammer and more people were comfortable putting it on the team.

Besides Gemini becoming more popular, there were some other creatures that had changes from last patch. Some are more significant than others, but these were the ones that stood out to me.

Yes, this dino again. Apparently we can't stop talking about this big green monster. In 1.12 there were 18 people in the top 50 that used it, but in 1.13 there is only 12. 6 people dropping it doesn't seem like much, but that means 12% of players aren't running it on their team anymore. Many of them could have dropped it for Geminitian or other projects, but the fact of the matter is it isn't as prevalent in the higher arenas as you might think.

We also saw a drop in the use of Indoraptor Gen 2. It is still among the top 3 creatures being used, but it went from 42 to 37 teams. The slight nerf it took in 1.13 with cleanse being removed from Cautious Strike allows for more possible set up opportunities and it loses some more matchups. It is still a very solid creature and can be almost unstoppable when it can successfully use Mutual Fury.

This is an interesting change. As Vexus went from being on 1 team to being on 5 different teams in the top 50. We are still very much in an immune meta so bleeding creatures aren't as useful as they have been in the past. But the changes to Indo2 actually make it more susceptible to bleed, and Vexus can also help bring down the health on high health creatures such as Grypolyth and Trykosaurus so I can see how it can have a place on a team.

It seems as if Dracocertops has finally met the ending everyone wished for it. There were 6 teams that ran it in 1.12 but it looks like it has been dropped from all of the top 50 teams. With the increase in armor in the top creatures, the Swap in Savagery move just doesn't do enough damage to make a big difference most of the time. DC many times ended up just being swap in fodder and it looks like the top teams exchanged it for another creature on their team.

Thyla took a pretty significant nerf this patch with an almost 500 HP drop. This forced several players to drop it from their teams. With health boosts, it is still a very good option, but it now loses some matchups that it otherwise won the last patch. Especially against creatures with slowing moves like Geminititan and Ardentismaxima. It was only dropped from a handful of teams but the nerf was still enough for people to make changes.

Mammolania is new to 1.13 and with exclusive DNA to create it (Mammoth) not many teams were able to get it up to team level yet. It is an incredibly strong creature with immunity to distraction and a Definite Rampage that is almost impossible to stop (unless you can stun it). As the Mammotherium global pursuit goes live (hopefully soon!) expect to see more of these being fielded by the top teams.

We didn't go over all of the creatures used in the top teams and there are plenty more we could probably discuss. Hopefully, this preview shows you what those top teams are seeing and playing with on a daily basis in the arena. We know not all arenas are the same and might not be reflected by this breakdown, but it does show how incredibly strong those top creatures really are. It also shows that there is still some variety at the top and it's best to run the creatures that work best for your team. Make sure to join our discord for more discussion and let us know what you think about the top teams and the creatures being used there!