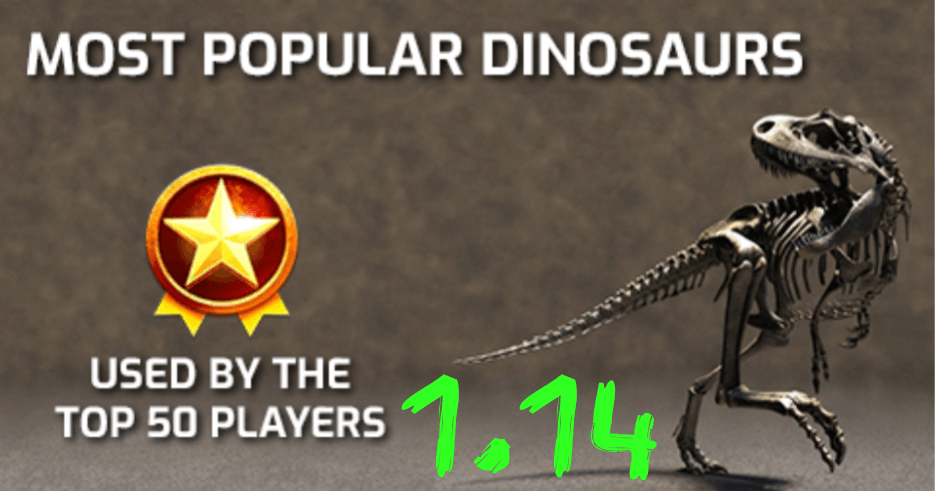 Explorers! With the Blue season finished we started to take a look at the Top 50 of the game again to see what creatures they use! As usual in this series, we want to give a shoutout to KillerT77 from our Discord server, as they helped compile this data! So what creatures are currently used by the top players in the arena? Let's find out.

Down below you will find a picture of the creatures that were used the most in last season. All of this data was collected on May 20th, so the data will be a bit older than normally. The creatures in this picture will most likely have changed since then, as a lot of the top people were talking about dropping certain creatures from their team. The numbers in the image represent the amount of times the creature was present in the top 50 teams. Huge shoutout to our artist Orange Rex for creating this image! 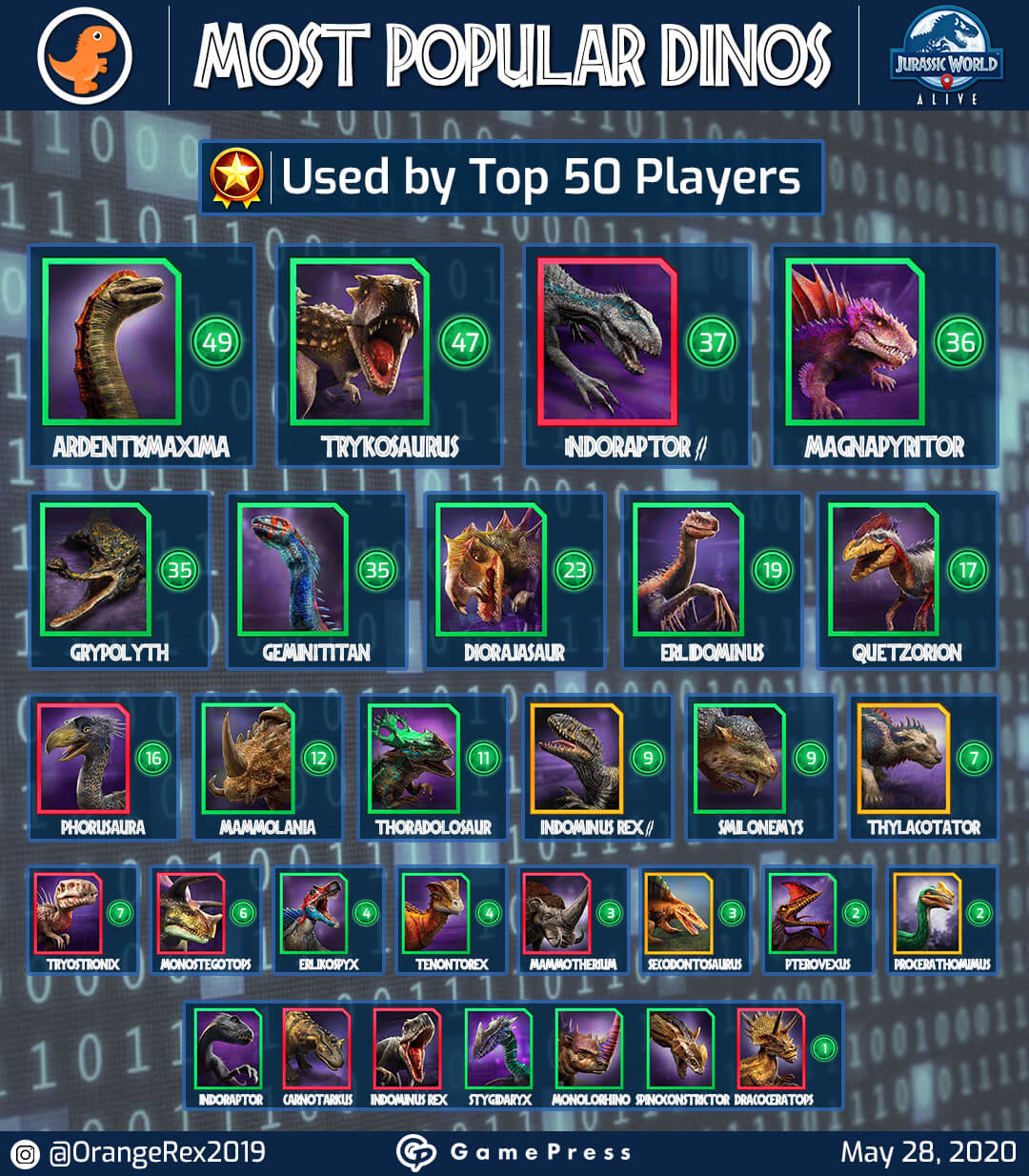 Here is a visual to show the top 50 over the past 3 updates.

As you can see, there are some differences compared to the last 2 patches. The top 10 mostly stayed the same, but there is a bigger gap between the first two creatures and the creatures after them. The top creature is on 47 different teams, while the number 3 is used by 37 teams. Let's see if we can identify a bit more why the top players use the creatures they use!

As you can see, the top 6 creatures are used by at least 35 of the top 50, showing just how powerful these creatures really are when boosted and leveled to the max. After them the amount of usage drops quickly, but they are still used an awful lot. Let's dive a bit deeper into the top creatures and some special mentions!

Ardentismaxima at the time of gathering the data was used on all but one team. That. Is. Insane. We all know how powerful she really is, but being used by almost every player in the top 50 just shows how powerful she really is. The Healthpool it has combined with the 15% Armor will prevent any high damage creature from oneshotting it and with a kit centered around dealing with speedsters Ardentismaxima will really be a very useful member on their teams. It will deal with all the Indoraptor G2, Magnapyritor, Phorusaura and Quetzorion running around, that's for sure!

Comparing to last article Trykosaurus remained on 47 of the teams, but there are whispers going around that people might plan on dropping it in favour of something else. However, as of right now Trykosaurus' versatility and high damage output still puts it solidly as the number two of this list. While losing badly to Indoraptor G2 and having a less-than-favourable matchup against Magnapyritor, Trykosaurus will do well against all those Ardentismaxima and Geminititan running around, as well as any non-Armor Piercer like Phorusaura and Erlidominus!

Indoraptor G2's place as third of this list shouldn't be surprising. With Cautious Strike and Mutual Fury providing excellent damaging and defensive options and having two very useful Immunities to Stun and Distract, Indoraptor G2 dominates all the high-damage dealers that aren't Immune to its Distraction or who cannot hit through Evasive. You still have to be careful around its counters Diorajasaur, Geminititan, Ardentismaxima and Phorusaura, but a well-timed Mutual Fury can quickly change the flow of the match!

Magnapyritor's usage has increased compared to last article and we are somewhat surprised, seeing as there were talks about people wanting to drop it. Nevertheless, its Immunity and very versatile offensive kit will make Magnapyritor a formidable opponent to all creatures depending on the build you have chosen it for boost-wise.

This crocodile really shines in the higher metas with high Health creatures. being so prevalent. Being able to chip away their Health slowly while staying healthy at the same time can really help your team out. As mentioned in the last article of this series Grypolyth is not a 1v1 creature but should be used as a trapper, making sure that the things it can counter (Diorajasaur, Smilonemys, Phorusaura) cannot leave the battle and will lose to it. Even able to take down a lot of Health from Trykosaurus, Geminititan and Ardentismaxima as well, this creature is used the best on the end of the match when its counters are gone. The best boost build for this creature still is T20 Health and T10 Attack, as you really want to maximize that Health stat to survive as many hits as possible.

It seems the exclusivity of Geminititan is starting to wear off in the top 50 as 35 of them are now running what could be claimed as the best creature in the game. With a massive damage output, lots of survivability and amazing stats this creature will definitely put a dent into any opponent, regardless if it is designed to counter it. Immunity gives it virtually no weaknesses and only raw chomping power can take it down.

Diorajasaur is an interesting creature, as it is basically a more defensive Trykosaurus that is equipped to deal more damage to Evaders. As such is is a much better check for Indoraptor G2, but its bulk will also help it against non-Armor Piercers like Erlidominus and Phorusaura. With both Instant Distraction and Instant Invincibility it can stall out a battle while chipping away at the opponent with its Precise Shattering Counter, leaving the opponent in prime position for a revengekill.

As the meta in the upper arenas grows to have more Armor and Health, Erlidominus is starting to fall off a bit. While its massive Attack and Rampage on T1 will let it deal a lot of damage, creatures are now being built to counter it and depending on the draw you and your opponent has, it can either do lots of damage, or die pretty quickly without doing much. We are not saying it is a bad creature, but the meta overall is favouring creatures that are good at dealing with it, such as Geminititan, Trykosaurus, Indoraptor G2 and Diorajasaur.

The top 8 of the game are certainly creatures to look out for, but there are a lot of other creatures that you definitely need to see, as some of the creatures in the Top 50 are either highly unconventional or while they are used less they still are extremely powerful creatures. Let's get started with some honorable mentions.

Rivaling Geminititan when considering the most powerful creature in the game, Mammolania's usage is at the same spot where Geminititan was last time and again it's due to Exclusivity. Mammoth is a Sanctuary Exclusive and Elasmotherium being a Daily Rare that can only be hunted for once a week will not help leveling this creature fast, so that is probably why it is so low on the usage list. However, seeing how much damage it can dish out with Persistent Ferocious Strike and Definite Rampage this creature is sure to be used more once players have finished getting it to an appropriate level!

This Epic creature is being used by 9 of the 50 players, and at first you might wonder why, seeing as it also has a hybrid in Indoraptor G2. The truth is, Indominus Rex G2 might be even better in the higher arenas than Indoraptor G2 is, due to the ability to deal much better with the threats that are running around there! Definite Strike for all the Evaders and Shielding creatures, Armor Piercing Rampage for creatures with Armor and Cloak and Mutual Fury for increasing its damage output! With high Health and Attack stats as well as Immunity Indominus Rex G2 is an extremely scary creature!

This creature also went up in usage and looking at its kit it's not hard to consider why. Having two Rampage moves in Instant Rampage and Rampage and Run this creature can dish out damage incredibly quickly while also allowing it to get out of matchups it doesn't do well in, like Mammolania, Trykosaurus and Diorajasaur, as well as Quetzorion.

Last article we were shocked to see Secodontosaurus on the list. Well, two more people followed IDGT as there are now three Secodontosaurus' running around! With incredibly high damage and Immunity to prevent any debuffs Secodontosaurus is used to deal with all the high Health creatures like Geminititan, Diorajasaur, Trykosaurus and Ardentismaxima, who cannot Shield or Distract Secodontosaurus' big hits!

So that is the rundown of all the creatures used in the Top 50! Once again, thank you KillerT77 for compiling the data for this article. Are there any creatures you think the Top 50 should consider or were there surprise creatures you did not expect this time? Let us know in the comments down below or in our Discord server! Until next time Explorers!