Last Cloudia: Should You Pull? - Collection of Mana 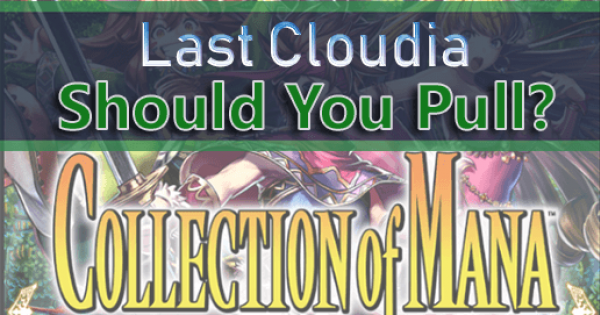 This is the first Limited banner we're getting and it's a big one, featuring 3 Units and 3 Arks. Nostalgia aside, how do these Units stack up to the rest of the cast? Are the Arks worth your time?

All three characters are great in my opinion. Even if Randi is considered to be at the top of the physical DPS food chain, do not underestimate what a well-built Primm might do for your party.

Randi is a pretty straightforward unit. He deals a lot of damage, and he deals it fast. His S1 and S2 have a very fast execution time, allowing you to spam them until you run out of SCT.

His S3 is a different beast altogether, as Randi will spin all around the place, often sliding out of the enemy's hitbox as well. This skill can either be subpar or incredibly overpowered, should a boss allow it.

The Mana Beast boss is the first one you can see this working on, as it has a fixed hitbox that spans most of the screen, and thus will take damage from every single hit in Randi's "Spin to Win" animation.

Primm is one of the better supports in the game, and not a bad physical DPS herself. Of course chances are that if you focus on support skills, her damage might suffer in comparison to more dedicated units (as SC is finite), so it will depend on how you build her.

Her Saber spells are unique and they will add an extra hit of the chosen element to the normal attack of any unit. They will not turn the entire normal into that element, that's a common misunderstanding.

Popoi is one of my favorite units in the JP server, being the ideal choice for fast farming as their spells don't freeze time. They also come with a built in INT Up III, so if you haven't pulled God of the Dead, that's another reason to focus them.

Burst and Explode have a very fast animation, cover a significant amount of ground, and are usually perfect for instantly clearing out waves, provided you have adequate casting time reduction.

Evil Gate on the other hand will deal concentrated dark damage over a smaller area. Among their other spells, Thunderbolt and Dropper give Popoi access to two extra elements for free (so a total of 5 elements for 0 SC), but these aren't very powerful sadly.

Rating: 6/10. A great accessory for survival, it basically gives the Blessing of Mana skill for free, saving you 3 SC (if you even land the Ark below that is).

Rating: 9/10. The best sword in the game, competing with a future unreleased ether reward.

Rating: 6/10. A powerful STR boost, but only during the night. The Pursuit damage increase should help if you have a normal attack-focused build with Impact skills, even better if you use Primm's Saber spells.

The Arks in the banner are not as meta-defining as the units, and that is a very good thing, since they are limited. The moment we start getting crucial skills on our limited arks, you could potentially gimp your entire roster by not pulling a certain item.

Needless to say, all of the Ark skills are unique, and can't be obtained from any other Arks.

Don't fret too much if you can't land Final Fantasy Adventure, unless you really want to set Popoi as your support.

Gemma Knights is an excellent defensive measure against magic, but at the moment of writing there haven't been any significant magic-focused bosses on JP that couldn't be dealt with simply by keeping their INT debuffed with Lostoma. It definitely could find use on some bulkier PvP builds however.

Tree of Mana is definitely the best Ark to come out of this banner. Even if the abilities aren't really that exciting, both the Ark passive and the Ether reward are excellent.

Power Counter is a significant boon (+30% STR is no joke) for physical units with a subpar Ultimate, like Lukiel...or maybe even Sevia if you don't care about her damage reduction. Just keep in mind that the gauge will need to be filled first so you'd only be looking to use it on long stages or boss fights.

Lastly, Trials of Mana is probably one of my favorite SRs in the game, it's very unique.

Holy Bolt in particular is very noteworthy since it's the only real-time Light spell, and you'll find it's quite powerful and fast as well. The only catch would be the smaller AoE, but I still really recommend teaching it to your mages for faster clears overall.

It's obvious by now but this is a resounding YES.

This is the first limited banner, and what a banner it is. 6 items on the list and only one free lap on the Step-Up makes for a sad free 2 player. But you can always keep pulling on the regular banner, as long as you have hoarded enough of course.

There is probably gonna be an Ark Focus Banner on the 2nd week, if they choose to follow the JP version. This means that there's an optimal strategy to pulling, if you wish to save as many gems as you can at least.

When pulling, be it on the Step-Up or the Regular banner. You'll want to stop for sure the moment you get 2 of the 3 Units on the banner.

The reason for this is that the Day 3 Guaranteed ticket has a 33% chance to give you that Unit you're missing. If you're only aiming for one particular Unit (like Randi), then you can choose to not pull at all until you get said ticket and try your luck then.

Once your ticket is spent, you can choose to either keep trying for whatever Units you're missing on the Step-Up/Regular banner...OR wait for the Ark banner to show up on the last week, and invest your gems there instead for a higher chance to land Tree of Mana if you still don't have it.

If you're only missing Final Fantasy Adventures though, you can probably stop pulling altogether unless you're a completionist.