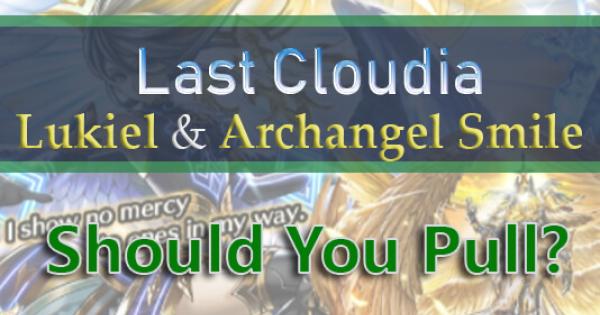 The first new Unit that arrives to Last Cloudia. How well does she stack up compared to the current roster? And how about that Ark then, are any of those skills worth your while?

Lukiel excels both in physical damage and in a supportive role. Her skills sport a long hitbox ahead of her, which usually means she can reach out and stun enemies before they can land any blow on her.

Her S2 will damage everyone around her in a wide area, while her S3 is ranged and can be used to snipe faraway threats.

Support-wise she has access to the ever useful Healing Wind early on, eventually switching to Magic Castle and Grand Regeneration to keep your party alive.

The reason she's not in S tier is because her tree is lacking in useful passives, aside from her hidden ability: Archangel's Blessing (which she shares with the featured Ark, something that will become the norm for most banners going forward).

Her Ultimate is also lackluster, serving as a debuff/ailment cleanse but not much else. Thankfully her overall damage output and resourcefulness still earn her a well-deserved spot on A+.

Archangel Smile is the big prize you'll want to get from this banner. It gives you access to two incredible skills:

Archangel's Blessing provides an amazing 30% MP regeneration between waves, even if the skill itself is quite pricy at 9 SC.

It was more of an afterthought in the japanese server, since Pose of Honor activated even when killing an enemy with magic, and thus casters hardly had any MP issues. Since the effect was changed for the global version however, this is the next best option.

Shining Zok is the Highest-tier Light spell, and one of the two most damaging (and expensive) ones available. The other one is Abyss Gate, a currently unreleased Dark spell.

But Light turns out to be a better element than Dark, since most enemies in the Nightmare dungeons either don't resist it, or are downright weak to it.

As usual for high-tier spells, it will freeze time and deal a lot of damage to everything in the area.

Unless you're planning to hoard long-term, then the answer is yes.

When compared to the 3 or 4 upcoming banners, Archangel Smile will usually come out at least on par with the near future SSR Arks, while Lukiel tends to be a solid unit overall.

The next banner will feature a very strong Unit (Romel) with a not-as-powerful Ark (Phoenix Blow), so you could choose to skip that one instead if you prefer pulling for Arks over having to build new characters from scratch.

Just keep in mind that, as usual, the featured rates aren't kind (they're only about double or so when compared to the offbanner rates).

Both Lukiel and Archangel Smile are already in the general pool, and you'll most likely be able to pull them both eventually while trying for other Units/Arks.

If you do decide to pull, it would probably be smart to stop after getting either the Unit or the Ark, to maximize your chances of getting something new.