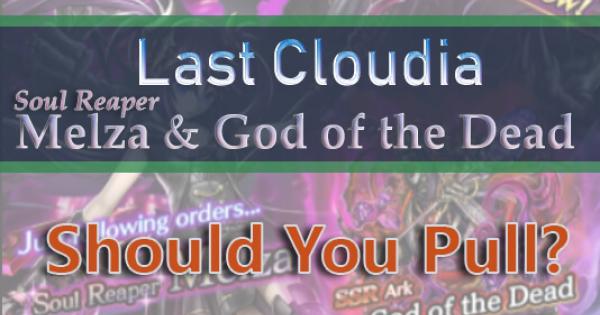 The first Shift Unit arrives to Last Cloudia. How well does she stack up compared to the current roster? And how about that Ark then, are any of those skills worth your while?

Soul Reaper Melza is built as a hybrid unit, capable of taking advantage both of STR-focused and INT-focused builds.

Her skills scale off STR, and have life-stealing effects which help her stay on the frontlines, and her normal attack is both powerful and fast, similar to that of OG Melza.

INT will boost the power of Dark Matter and Abyss Gate, both of which she learns naturally, as well as the power of her normal attacks thanks to Phase Change. Her Ultimate also scales on INT exclusively.

Sadly, while she can do both physical and magical dps decently, she doesn't particularly excel at either of them, and thus she isn't usually considered a top tier fighter.

However a good build will take advantage of the best of both worlds to further increase her damage output. I recommend to build her with STR in mind, but without neglecting her INT since it will further boost her power and versatility.

God of the Dead will provide a strong boost to your magic dps right from the get go via Dark Matter, and more importantly Magic Up III which is unique to this Ark.

Death God is a bit of an oddity. Could be useful to put on your Physical DPS early on, together with skills like Dual Wield and the Impact series. However, once the unit gets stronger, most builds will forego this kind of ability as it's unneeded and quite costly SC-wise.

Lastly Abyss Gate is a top-tier T3 spell similar to Shining Zok. The issue being that Light is getting a big boost with one of the upcoming SSR Arks, so Dark ends up being a tad unused on JP.

Even if the Ark Ability ends up being a bit underpowered, the Ark still boasts the highest INT in the game currently, so it wouldn't be a bad idea to equip it to your Support unit anyway.

Kind of a mixed bag on this one. My general advice is to skip.

God of the Dead would be the main reason you would want to pull in here. You'll have to decide how much you want that extra INT for your casters, although access to the Dark element is kind of pointless if your main caster is Dyne (he can already convert his fire spells to dark damage).

Soul Reaper Melza is our first Shift Unit, meaning it will retain all of the skills you taught to the original Melza, but that's about it. Her level, ability trees, enhancements, awakenings, etc. will all start empty like with any regular unit.

The next banner will feature a very strong Unit (Romel) with a not-as-powerful Ark (Phoenix Blow), so you could choose to skip that one instead if you prefer pulling for Arks over having to build new characters from scratch.

Just keep in mind that, as usual, the featured rates aren't kind (they're only about double or so when compared to the offbanner rates).

Both Soul Reaper Melza and God of the Dead are already in the general pool, and you'll most likely be able to pull them both eventually while trying for other Units/Arks.

If you do decide to pull, it would probably be smart to stop after getting either the Unit or the Ark, to maximize your chances of getting something new.