Legends of Runeterra Best List: Champions - The Call of the Mountain 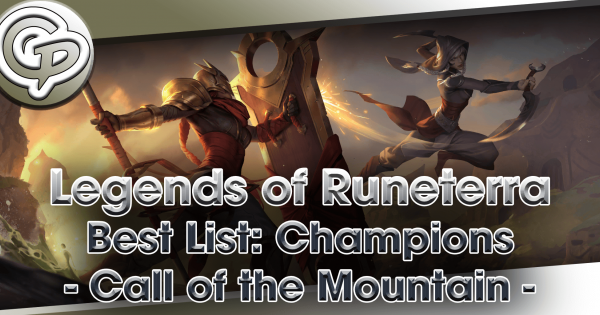 Tier 1 is reserved for Champions whose value far exceeds their cost and forces unbalanced attention in the meta. It should be noted that it is of our belief that Riot has developed an incredibly balanced game, so Tier 1 entries are very exclusive.

Tier 2 is home to Champions who feel balanced in the meta and can have a consistent, positive win rate when piloted with the expected skill.

Tier 3 is for Champions whose flaws outweigh their benefits, or they are directly outclassed by another Champion in a similar role.

Aurelion Sol is powerful, he was designed to be; and even if this list rated exclusively visuals, Aurelion Sol would still find his way to the top. While needing Enlightened status to even see the field, Aurelion Sol's package ensures a safe and reactive route to turn 10 with his debut Keyword; Invoke. Providing several Celestial options on the fly throughout the game allows Aurelion Sol plenty of avenues on the ramp to his end game with a full bench of free Celestials. This is a welcome departure from traditional ramp decks, which typically have a rigid curve to follow.

Immediately offering the strongest and most consistent Stun engine in the game, Leona also limbers up the loveable underdog Yasuo into the samurai he was meant to be. Leona/Yasuo feels like a direct upgrade to both the Frostbite midrange decks that dominated last season, and to Yasuo's package, which up until now largely left the samurai solo. Leona herself is a powerful presence on the field, spec'd exactly opposite of Ashe means her 6 Health makes removal hard. Leona only needs to be present on the field when Daybreak activates to use her Ability, another upgrade over Ashe's Attack trigger.

Continuing with the 4/6 frame, but costing one more Mana than Leona, Trundle is a late game control Champion, which makes him an effective partner to more traditional late game sweepers like Aurelion Sol and even Sea Monsters as Trundle's Behold package rewards 8 cost cards and higher. Trundle has a massive turn 8, in which he plays his signature Ice Pillar, his Vulnerable dealing flag on the hill, for the net price of free. Behold in itself risks bloated hands, but Trundle's Regeneration, solid stats, and stall-heavy Region make Trundle a hefty opponent to mitigate. Trundle/Swain and Trundle/ASol are legitimate contenders for top 5 decks in the meta.

Level 1 Taric's Support not only passes Tough, but doubles the effectiveness of buffing Spells. Immediately, powerful interactions like Fury of the North or Fiora come to mind, the latter especially benefits from Level 2 Taric's immortal Ability. Taric's home faction is the Gem package, which are not only a versatile, near abusable package on it's own, but also works to Level Up Taric quickly. Taric's placement on this list is likely to improve as Taric's fundamentally powerful Support ability discovers new interactions.

Lulu is a Champion who requires outside interaction to use the full text of her Ability. This was the primary problem for early Yasuo, as it required him to fill his deck real estate with necessary cards -- leaving little room for variation and easing opponent's predictions -- although this kind of Champion power did not seem to hinder Shen, who Lulu is an obvious successor to. In fact, Lulu/Shen is a hilariously aggressive deck for 2 Champions with mostly passive Abilities. What separates Lulu from early Yasuo is how quick and efficient her buffs can activate, generating large Squirrel Followers with access to Ionia's classic control Spells while offering cheap and powerful Spells of her own.

Nightfall is both initially very powerful, and also very restricted currently. Diana edges out over her counterpart, Nocturne, because Diana's Level Up condition is easier to achieve, and while both Diana and Nocturne's Abilities activate from the bench, Diana has better stats for that kind of play. Diana can also pair with Leona, taking advantage of the opposite play of their Abilities while both offer complimenting battlefield control, and Diana/Lulu sets have also been spotted in the wild. As Nightfall recieves more support, Diana may rise up this list.

Nocturne's Abilities read like they are powerful. What holds Nocturne back is his Level Up condition, which requires 5 Nightfall Allies to attack. This shifts focus to protecting the small selection of feeble Health Nightfall Allies, as the pool is scarce and limited to 2 Regions. Nocturne's high offense and low health doesn't bode well for his board wide debuff on his Level 2 side. Typically, it is better to run that kind of support on Allies who can survive an attack as any board wide effect will call aggro.